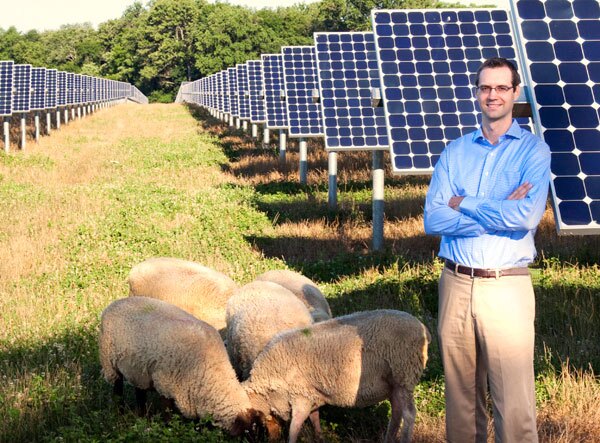 HARNESSING THE SUN'S POWER Building on our legacy of safeguarding the planet, one of the largest solar panel arrays in New Jersey became operational on the Titusville, N.J. campus of the Janssen Pharmaceutical Companies of Johnson & Johnson in September 2010. Jed Richardson, shown here, oversaw the design and implementation of the project.

On a bright day at the campus of Janssen Pharmaceutical Companies of Johnson & Johnson, the sun’s rays are doing more than just illuminating the sky. They are also providing energy to what is one of the largest solar panel arrays in the state of New Jersey.

In September 2010, the Titusville, N.J. campus flipped the switch on this 4.1 megawatt ground mounted solar system. The array of 13,496 solar panels, which tracks the sun from east to west, is estimated to generate enough energy to provide over 70 percent of the campus’ annual electricity needs, or roughly the amount needed to power 600 homes annually. The site also hosts two roof mounted solar systems. When all combined the three systems are expected to account for over 85 percent of the campus’s annual electricity needs.

“The Titusville site has had a long history of energy efficiency and sustainability,” says Jed Richardson, Global Energy Director, Johnson & Johnson. “Over the years the facility team has implemented numerous energy savings projects including lighting & HVAC optimization. They have also implemented strict recycling, waste management and green cleaning practices. For these and many other reasons it was the first Johnson & Johnson site to receive the Leadership in Energy & Environmental Design (LEED) certification.”

In addition to the solar panels there are a few new additions that can be seen in the fields surrounding the Titusville campus. Sheep graze within, underneath and around the solar panels. By constantly trimming the grass and clover they act as a built in landscaping crew.

“This kind of project falls in line with our Credo values,” says Richardson. “It positively benefits the environment, it reduces our operating costs, and it relieves our energy burden from the electric grid during peak hours which benefits the community.”

In addition to the Titusville site, Johnson & Johnson has solar power installations planned or completed at 21 sites worldwide, which together represent an installed capacity of nearly 18 megawatts, roughly the amount needed to power about 2,700 homes annually.

As part of the Company’s Healthy Future 2015 goals, the aim is to increase on-site renewable and clean technology energy capacity to 50 megawatts.

“When we energized this solar array it was the largest system in the state of NJ, this brought a lot of attention to not only our site, but to the Company’s energy reduction program globally,” says Richardson. “We are known as a leader in energy and carbon reduction initiatives and are very proud of that fact. At Johnson & Johnson we understand the relationship between a healthy environment and human health. It is great to work for a company that is willing to lead by example.”