Moving From Treatment To Prevention 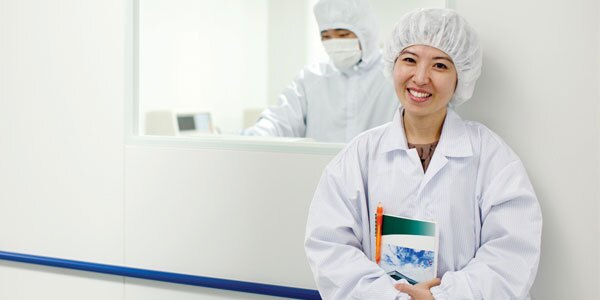 MANUFACTURING VACCINES Kyung Mi Choi works at Crucell’s ultra-modern vaccine manufacturing facility, which opened in 2011 in Incheon, South Korea. It is one of the largest such facilities in the world.

This story appears in the Johnson & Johnson 2011 Annual Report

“A vaccine prepares the body for whenever a virus attacks you,” explains Jaap Goudsmit, Chief Scientific Officer, Crucell N.V. “You vaccinate healthy people, whereas drugs are used to treat sick people. The aim of vaccination is to prevent disease.”

The Crucell facility is one of the largest in the world, capable of making more than 100 million doses per year of pentavalent vaccine.

It takes more than scientific expertise. As our Pharmaceuticals business grows beyond a treatment model to one that includes prevention with vaccines, an equally important consideration is the ability to make hundreds of millions of doses of vaccine at a price that’s affordable for the majority of the globe.

That’s what Crucell, acquired by an affiliate of Johnson & Johnson in February 2011, is working to do with a new, ultra-modern manufacturing facility in Incheon, South Korea, that opened in 2011. One of the largest such facilities in the world, it is capable of making more than 100 million doses per year of pentavalent vaccine, a combination of five vaccines in one: diphtheria, tetanus, whooping cough, hepatitis B and haemophilus influenza type b (the bacteria that causes meningitis, pneumonia and otitis). The facility makes half of all the pentavalent vaccine used worldwide by UNICEF, the world’s largest distributor of childhood vaccines.

Crucell is also working to evaluate possibilities of using vaccines beyond preventing infectious diseases. One area of focus is prevention of diseases of the elderly, such as certain cancers and Alzheimer’s disease.