The Year Was 1886: The Story of How Johnson & Johnson Was Born

It’s a cold January day in 1886, exactly 130 years ago. James Wood Johnson, one of the founders of Johnson & Johnson, is on a train heading from New York to Philadelphia. Early in 1885, Johnson and his brothers Robert and Edward had left their former company Seabury & Johnson with the intention of starting a new business, and James was looking for a location. He was on a westbound Pennsylvania Railroad train from New York to Philadelphia. When the train stopped at a tiny station halfway through the journey, Johnson & Johnson found its hometown: the city of New Brunswick, New Jersey.

Photo from our archives showing New Brunswick as it would have looked when James Wood Johnson arrived 130 years ago this month. Alert blog readers will notice the first Johnson & Johnson building at the extreme right of the photo.

In 1886, New Brunswick was a center of entrepreneurial and industrial activity thanks to three things: the railroad, the city’s position on the Raritan River and Delaware-Raritan Canal, and its placement halfway between New York and Philadelphia. The city’s approximately five square miles boasted a thriving, nationally-known wallpaper manufacturer, a fruit jar manufacturer and a box manufacturer (both of which became packaging suppliers to Johnson & Johnson!), an iron works, the Edison Illuminating Company, a hosiery manufacturer, a carriage factory, and more. Johnson & Johnson would join the city’s fledgling first hospital, founded 1884, in forming the nucleus of New Brunswick’s significant health care presence today. 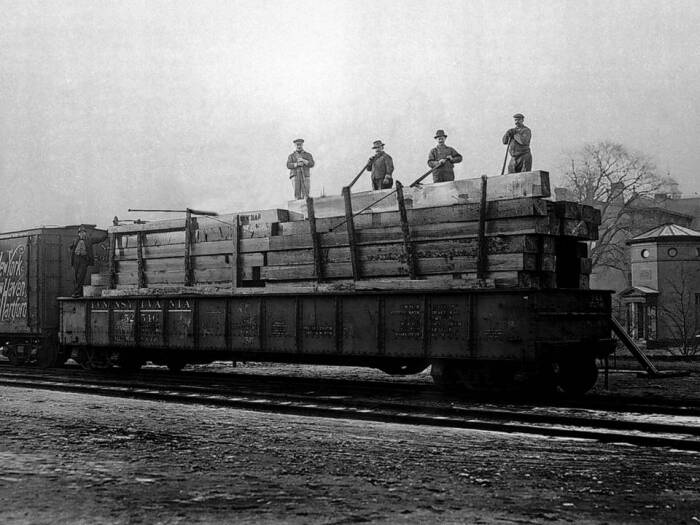 Undated photo of a Pennsylvania Railroad train stopped near the railroad depot, close to the first Johnson & Johnson building, from our archives.

When the Pennsylvania Railroad steam locomotive huffed to a stop at the little railroad depot bordered by George and Hamilton Streets in New Brunswick, Johnson looked out the window at the cold January landscape. 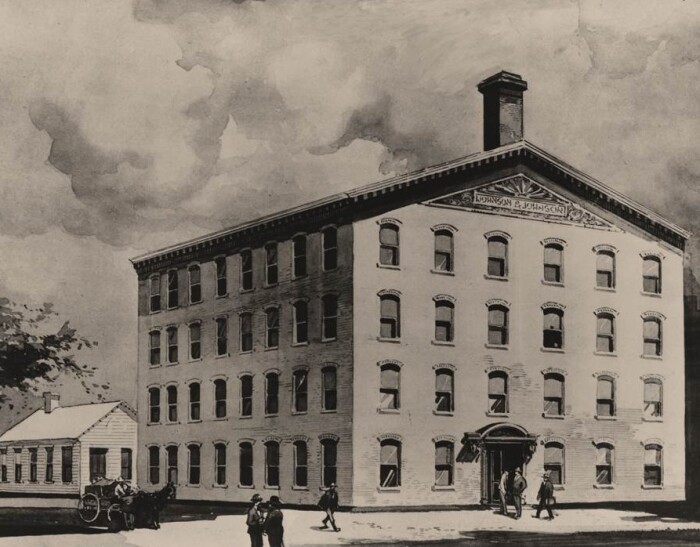 Artist’s rendition of the first Johnson & Johnson building, from our archives. The four-story brick structure was actually nestled among a variety of other buildings next to the railroad. 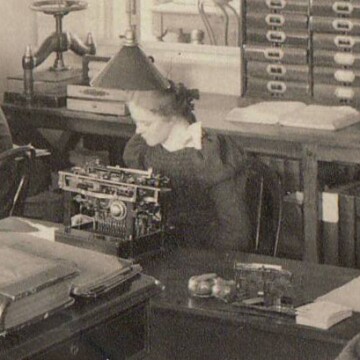 An employee at Johnson & Johnson in 1895 uses one of the disruptive technologies of the 19th century: a typewriter. From our archives.

About 150 feet back from the tracks, past the distinctive oval “Look Out for the Locomotive” street signs, Johnson noticed a four-story red brick building with a walk-in basement, a distinctive square chimney, arched windows and a “For Rent” sign. It was the former Janeway & Carpender wallpaper factory, outgrown by one of the city’s thriving businesses that had moved to larger quarters. Johnson got off the train to take a closer look, and he ended up renting the top floor of the building for Johnson & Johnson. The company was named for himself and his brother Edward Mead Johnson. Older brother Robert was still bound by the terms of the agreement dissolving the partnership of Seabury & Johnson, and would not join until September of that year.

As it turns out, 1886 was a great time to start a business. Standard time had been introduced by the railroads in 1883 (before that, strange as it may seem, each town set its clocks to its own time, based on the sun’s position in the sky relative to that individual town). Technological advances such as telephones and typewriters were revolutionizing the workplace, and the economy was transforming from one based on farming to one based on industry. Innovation seemed to be everywhere, and the atmosphere for someone looking to go into business was one of great change and possibility. 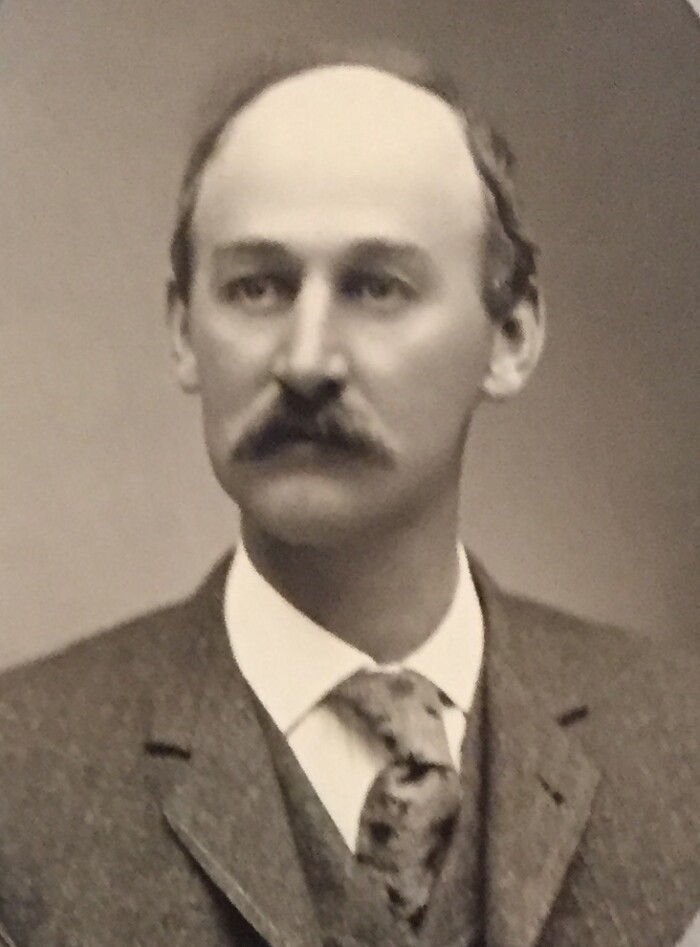 James Wood Johnson, from our archives.

Tall, dignified and thoughtful, James Wood Johnson must have presented a reassuring sight when he inquired about the brick factory building for rent. By 1886 he had solid experience as superintendent of manufacturing for Seabury & Johnson. Johnson was a skilled engineer who had designed the manufacturing machinery for his previous company. He would do so again for the tiny little startup that he and his brothers were creating. 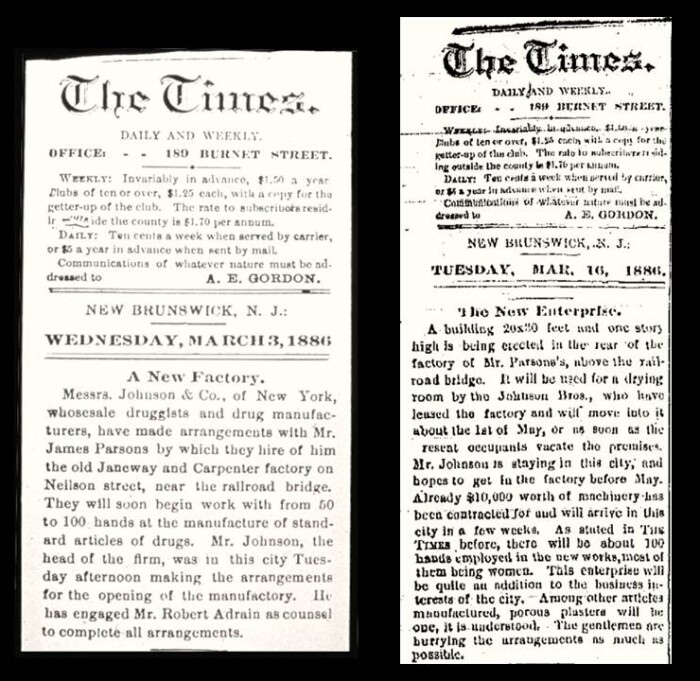 Articles about Johnson & Johnson in the March, 1886 New Brunswick Times.

By March of 1886, things were progressing. On March 3, 1886, The New Brunswick Times carried news of the new company with the headline “A New Factory.” The Times optimistically reported that Johnson & Johnson would begin manufacturing with “from 50 to 100 hands,” but in fact the company started with just 14 employees: eight women and six men. Just thirteen days after that newspaper article, the City Matters column in the Tuesday, March 16 edition of the newspaper noted:

A building 20 x 30 feet and one story high is being erected in the rear of the factory of Mr. Parsons, above the railroad bridge. It will be used for a drying room by the Johnson Bros., who have leased the factory and will move into it about the 1st of May, or as soon as the present occupants vacate the premises. Mr. Johnson is staying in this city, and hopes to get in the factory before May. Already $10,000 worth of machinery has been contracted for and will arrive in this city in a few weeks.

The Times went on to note that the majority of employees in the new business would be women. 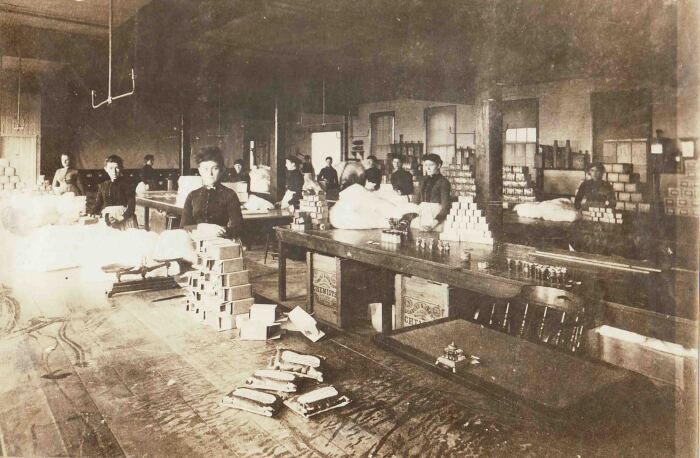 Employees at Seabury & Johnson, from our archives.

Now that they had space for their new company, James Wood Johnson and Edward Mead Johnson got to work setting up their new business with the eight women and six men recruited from their previous company. These employees helped Johnson & Johnson open its doors, and two of them – Mathilda D— and William R—, earned positions of supervisory and management responsibility as the company grew. But in January of 1886, the brand new business was still setting up, and beginning to make the connections that would help it thrive, taking its first steps on the pathway to becoming the company known and trusted around the world today.