Caring for Our Heroes

We have a very active employee Veterans Leadership Council at Johnson & Johnson, and in partnership with them, we’ve had an exciting year supporting our servicemen and women, and their families in 2014. Here’s a snapshot of the work we’ve done this year:

In February, we were pleased to announce our partnership with American Corporate Partners (ACP), a unique non-profit organization dedicated to assisting U.S. military veterans in their transition from the military to the civilian workforce. Johnson & Johnson Chairman and CEO Alex Gorsky was also featured in a public service announcement encouraging people with business skills to share their valuable experience and guidance at ACP-AdvisorNet because “their service deserves our service.”

In April, Johnson & Johnson signed on to be the Official Healthcare Partner of the USO. Over the course of this three-year partnership, Johnson & Johnson will support and sponsor USO programs that offer direct aid, comfort and support to transitioning troops and their families.

That same month, we were honored to participate in the official opening of the USO Warrior and Family Center at Naval Support Activity Bethesda, home of Walter Reed National Military Medical. This center provides a place where wounded, ill and injured troops can begin their journey home from Walter Reed National Military Medical Center, and Johnson & Johnson is proud to sponsor their Community Room. 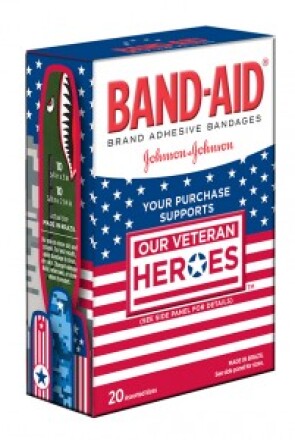 In May, BAND-AID® Brand launched OUR VETERAN HEROES™ BAND-AID® Brand Adhesive Bandages, featuring patriotic and military-inspired designs. 5% of the sale price of each box sold is donated to Team Red, White & Blue, an organization that helps enrich the lives of America’s veterans by connecting them to their community through physical and social activities.

In June, we were thrilled to participate in the first of our four sponsored programs with the USO, What to Expect: Special Delivery, which provides baby showers, educational information, and gifts to hundreds of military moms-to-be who are away from their family and friends. 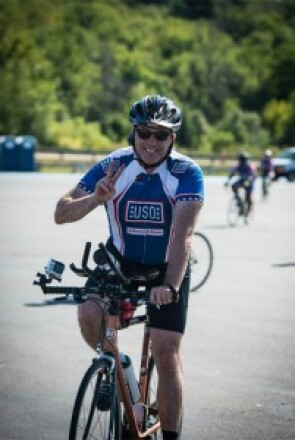 As a sponsor of the USO Mobile, which supports USO events and programs like Ride2Recovery, our DePuy Synthes business was honored to join the USO Mobile and host the lunch stop for cyclists taking part of the Ride2Recovery Minuteman Challenge, in Raynham, MA, in early September. The bike rides provide physical and mental rehabilitation through cycling for our nation’s injured veterans and healing heroes. A number of Johnson & Johnson employees had the opportunity to join in the ride, including DePuy Synthes employee Bill McCarty, who served in the US Air Force as a Communications Analyst / Security Specialist from 1981 to 1985 with active duty tours in (then) West Germany and Texas.

BAND-AID® Brand was also the presenting sponsor of the Team Red, White & Blue Old Glory Coast to Coast Relay, where from September 11 through November 9, runners carried an American flag 3,800 miles across the country to raise awareness and funds in support of veteran communities in America. During the relay, BAND-AID® Brand also donated $1.00 for each consumer message encouraging Relay runners using #RunWithGlory, up to $25,000.

In October we were proud to announce our newest partnership with the Travis Manion Foundation, on their Character Does Matter program, a program that connects veterans and survivors with emerging leaders across the nation, and engages the next generation of leaders to serve, directly impacting their local communities while carrying on the legacies of our nation’s Fallen Heroes. Our Johnson & Johnson Veterans Leadership Council has since aligned with local schools to bring the Character Does Matter program to those students.

Consumers helped us donate another $100,000 to the USO through consumer product purchases and by registering on HealthyEssentials.com throughout October and November.

In November, we were thrilled to have Chris Jordan, creator of the Johnson & Johnson Official 7 Minute Workout and exercise physiologist at the Johnson & Johnson Human Performance Institute, join the USO for their Caregivers Conference in North Carolina. The USO’s Caregivers Conferences help bring focus to how caregivers need to care for themselves, and Chris Jordan, a veteran himself, encouraged attendees to find time to focus on their physical and mental wellness and provided the group of caregivers with quick and easy ways to eat better, get active, boost their energy and live healthier happier lives.

Through Donate a Photo, launched in time for Veterans Day on November 11, we are supporting the USO’s connectivity services, which keep deployed service members and their families connected via online and phone calls home. The free app enables individuals to join us in supporting our deployed military members by simply sharing a photo.

Over the years, our employees join in to purchase and provide our products specifically for the USO’s Tiny Tots program, which connects new moms and dads who are physically separated by deployment when their children are born. Through this program, military mothers to newborns receive a gift set from the loved one who is deployed.

Finally, we bring 2014 to a close with two very special personal accounts. USO Warrior and Family Care Programs Vice President Ed Shock shared his experience as a soldier and a family man on the Global Motherhood page of the Huffington Post, and Johnson & Johnson executive and veteran Courtney Billington argues the benefit hiring veterans to deliver big business value and the J&J Corporate Blog and Forbes.

At Johnson & Johnson we are humbled every day by the sacrifice that these men, women, and their families make for our country. It is with pride that we help to care for these heroes, now and in the years to come.

We wish our servicemen and women and their families a happy and healthy holiday season.