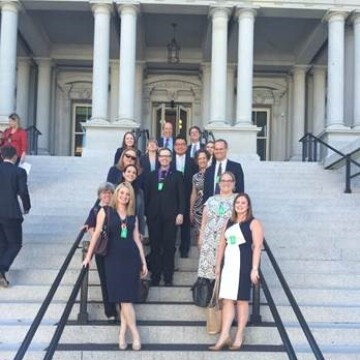 A year ago, Johnson & Johnson and Janssen Neuroscience hosted the first-ever leadership summit on eating disorders, a meeting of diverse leaders from the U.S. eating disorder community with the goal of finding ways to unite forces in order to better serve patients and their families. Over the ensuing 12 months, the participating leaders forged a culture of teamwork and developed joint strategies on awareness, prevention, access to care, research, messaging, fundraising, and policy advocacy.

Signs of progress were evident in September 2016, when the eating disorder community had its first-ever meeting at the White House, and again in December, when it realized the passage of the first U.S. national legislation on eating disorders, the Anna Westin Act, named after the late daughter of summit participant Kitty Westin. The new law provides training for health professionals and school personnel to identify eating disorders and intervene early, and lowers out-of-pocket costs for patients by clarifying that insurance must cover eating disorders like other illnesses.

Seeking to build on these early wins, the second annual U.S. leadership summit on eating disorders was held January 12-13, 2017, at the headquarters of Google’s life science division, Verily, in South San Francisco, California. Participants included association presidents, CEOs of leading providers, top researchers, patients and families, trailblazers in eating disorder law and in health communications, the developer of an exciting new mobile app for patients and their clinicians, and representatives of Google and Johnson & Johnson. The Summit included early pioneers in the field as well as many of the next generation of emerging leaders, and they came from every corner of the country, from Silicon Valley to Boston’s Rte 128 corridor, from Fargo and the Twin Cities to West Palm Beach.

Summit participants discussed how they could apply some of the lessons learned to take their efforts “to the next level” to better fight stigma, support early intervention, compete for scarce resources, speak with one voice, and speed the day when every patient has adequate insurance coverage, effective treatment backed by robust research, and supportive government, corporate, and educational policy.

To pursue these outcomes, the participants established an informal leadership structure and a timeline for action, including midyear working sessions and a third summit to be held in January 2018 at Harvard University in Cambridge, Massachusetts.

Eating disorders have the highest mortality of any mental illness, according to the National Association of Anorexia Nervosa and Associated Disorders, due to the strain on the body, the frequent comorbidity with mood disorders, and a high suicide rate. The prevalence of eating disorders has grown in recent years across all ages, social classes and countries, says the NIH. They are more common than Alzheimers’ and autism, more deadly than drunk driving, and more costly than depression and anxiety. Like other mental illnesses, they have an impact beyond the patient to the whole family and to the communities in which they live and the organizations in which they work. Stigma and low public awareness about eating disorders remain a problem, research is poorly funded, and insurance coverage and treatment options are inadequate.

Tom Insel, former head of the U.S. National Institute of Mental Health and now Verily’s mental health lead, closed the 2017 Summit by telling participants that the progress made in bringing the eating disorder community together over the past year was “an historic” achievement, one that called to mind the African proverb, “If you want to go fast, go alone. If you want to go far, go together.” And it is in that spirit that the leaders who attended the Summit will continue to work together to address the devastating, costly, and often overlooked impact of eating disorders.

Craig Kramer is Mental Health Ambassador, Neuroscience External Affairs, and Chair, Global Campaign for Mental Health, Johnson & Johnson. He and his daughter Katharine have discussed their family’s struggle with eating disorders on the J&J Parents blog.