Johnson & Johnson has named Franz-Ulrich Hartl, M.D., of the Max Planck Institute of Biochemistry and Arthur Horwich, M.D., of Yale School of Medicine and Howard Hughes Medical Institute as winners of the 2019 Dr. Paul Janssen Award for Biomedical Research.

Selected by an independent committee of world-renowned scientists, Hartl and Horwich won for their revolutionary insights into chaperone-mediated protein folding and join 16 scientists who have received the Dr. Paul Janssen Award since 2004, including three who went on to win the Nobel Prize.

Proteins are the molecules in cells that drive almost every biological process. Through their collaboration, Hartl and Horwich discovered that proteins are folded into their proper shape with the help of other specialized proteins called molecular chaperones. This process allows the proteins to reach their functional shape, which enables them to perform their biological function.

These insights have broad implications throughout biology and medicine, and hold promise for the development of new therapeutic strategies for treating diseases like Parkinson’s, Alzheimer’s and cancer, in which defects in protein folding are involved.

The life-long work of passionate and dedicated scientists, like Drs. Hartl and Horwich, helps us understand the world around us and brings hope for solving complex medical challenges that impact people’s lives. 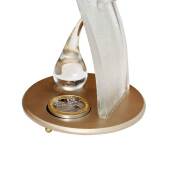