Share
Meet Stephen and Zohar, who elected to have bariatric surgery together and are now embracing their healthier—and combined 162-pounds-lighter—life.
By Melanie MannarinoApril 16, 2017
Today's Top Reads Close

When Dallas couple Zohar Wolf, 38, and Stephen Cardenas, 34, both decided to undergo bariatric surgery, they knew it was the right move for their health—and the health of their future together.

Wolf and Cardenas had both grappled with their weight since childhood, and tried practically every other solution in the book without success.

Today, nearly a year after their surgeries, the duo have lost—and kept off—a combined 162 pounds. And conditions they were battling, like diabetes and high blood pressure, have either improved or resolved.

And they're not alone. For many people, the most effective way to lose weight is through bariatric surgery—an umbrella term for different weight-loss procedures. The options include gastric bypass (which reduces the size of the stomach and connects it to the middle portion of the small intestine, bypassing the first part to restrict food intake and absorption), gastric sleeve (approximately three-quarters of the stomach is removed, restricting food intake and diminishing the hunger hormone ghrelin) and adjustable gastric banding (a band is placed around the stomach to restrict food intake).

In 2015, the most recent year statistics were collected, 196,000 people underwent bariatric surgery in the U.S. Gastric sleeve surgery, which both Wolf and Cardenas elected to have, accounted for just over half of those procedures.

In a study funded by the U.S. Department of Health and Human Services, patients who had gastric bypass surgery lost, on average, 64.8 pounds; those who had gastric sleeve surgery lost about 55.3 pounds. By comparison, people who lost weight without surgery dropped an average of 11.9 pounds.

As Wolf and Cardenas will tell you, a lot of thought and planning goes into the decision-making process when it comes to bariatric surgery. For those considering one of the procedures, the Health Partner for Weight Loss Surgery website and new app can serve as a helpful resource.

You can plug in vital stats to find out which procedure might work best for you, use a surgeon locator to find a doctor within 10 miles of your home and watch patient videos.

Patient stories like that of Wolf and Cardenas, who sat down with us to share why they chose to undergo bariatric surgery—and how it changed their lives.

We've Both Struggled With Weight Since Childhood

Zohar: I have struggled with my weight since the first grade. I was very shy, so I’d come home from school and watch TV all day.

Then, when I was 21, I came out as gay, and had a huge turnaround. When I met Stephen in 2012, I was living in Israel, and Stephen was there for work, training a sales team in Tel Aviv. I was at a healthy weight, and I was working out—I looked good.

Stephen, who’d also dealt with weight problems since a young age, was also very active, running marathons and working out. He was really into it.

Stephen: I was a very, very heavy kid. As a result of complications from adenoid surgery I had when I was 3 years old, doctors put me on cortisone, which made me gain a lot of weight very quickly. I developed a potassium deficiency, and had trouble walking and exercising. I went from being a thin, healthy little kid to a morbidly obese one.

I was so upset by the never-ending pendulum of gaining and losing—and every time, it got harder to lose.

Fast-forward to college: I started walking around campus; signed up for fencing, self-defense, yoga and swimming; developed a passion for running; and went from a 42-inch waist to a 34.

Zohar: After three months of dating, Stephen had to leave Israel, because his company didn’t file the proper papers for his work visa. I knew this was true love, so I bought a ticket to Texas and moved back to the United States, where I was born, to be with him.

Stephen: Even before we left Israel, I was piling on the weight. I was so busy dating Zohar that I made less time for the gym. We’d go to movies, dinners … Israel has amazing food, and I kept eating the way I was used to when I was exercising much more often. 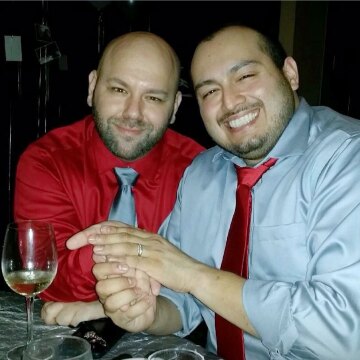 Zohar and Stephen before their surgeries

Zohar: We gained 80 pounds each over 4 ½ years. We tried everything in order to lose it. We became pescatarian for a year. We did a juice cleanse for 10 days—until Stephen woke up in the middle of the night swearing he could smell bacon. Over the years I had tried Weight Watchers, Nutrisystem and other diets, but I would lose weight and gain it back—sometimes double.

Stephen: I was so upset by the never-ending pendulum of gaining and losing—and every time, it got harder to lose. I broke a rib and twisted an ankle because my body wasn’t conditioned to be as active as I used to be. We tried every diet. The idea of gastric sleeve surgery was always in the back of my mind, but we didn’t take the possibility too seriously until Zohar’s diagnosis.

The Joint Decision to Take Control of Our Health

I never connected my family’s health troubles to my own obesity. But learning about my own health problems was like a slap in the face, telling me to wake up.

Stephen: So we did a lot of research on bariatric sleeve surgery. We went to seminars, and met with different doctors.

Zohar: There are other surgeries for weight loss, like gastric banding, but sometimes the band erodes and slips. And gastric bypass felt too extreme for us.

With bariatric sleeve surgery, doctors remove 80% of your stomach and create a sort of banana shape with the remaining 20%. The section they remove produces the hormone ghrelin, which makes you hungry. So you have less room for food in your stomach, and your body isn’t sending the hunger signal in the same way—those things help you lose weight.

I watched more than 100 videos of people who've had the surgery. That made me feel empowered.

My biggest regret is that I didn’t do this surgery earlier. When you look at the value of your relationship, it starts to hit you: You want to be there for a long time.

Stephen: When we made the decision to go ahead with the surgery, I weighed 271 pounds and had a BMI of 40. With a BMI that high, I was eligible to get the surgery through my insurance.

Zohar: I was 268 pounds and my BMI was 39-40, which is borderline. But I had what they call comorbid conditions: diabetes and high blood pressure. That made me eligible, as well.

Stephen: Zohar went first, in March of 2016; I got my surgery in May of that year. We both knew that if I had to go first, I would not have done it. I am notorious for buyer’s remorse, and I knew this was not something I could go back from. But once Zohar sets his mind on something, he does it.

Zohar: The surgery took 45 minutes, and I stayed overnight in the hospital. The worst side effect of surgery was the constipation; I had five very uncomfortable days before that straightened itself out. You’re required to be on a liquid diet for two to three weeks after surgery to give your stomach time to heal. I took two weeks off from work, but looking back, I could have gone back to work after four days.

Stephen: Two months later, it was my turn. After seeing Zohar go through it, and getting to know our doctor, I was more at ease. The surgery and recovery were fine for me, in part because I knew what to expect. But the doctor did say afterward that I had an abnormally large stomach!

Our New, Healthier Outlook on Life

Zohar: I weigh 186 pounds now—I’ve lost 82 pounds! Everything is so much easier than it was before. Waking up is easier—I have so much more energy. Little things, like fastening my seatbelt, are easier. I love tucking in my shirt now—it's something I’d never done before.

Stephen: I’m down to 191 pounds, which is an 80-pound loss. Before, I’d be so frustrated and mad that my pants didn’t fit—I’d button them, and then the button would shoot across the room. Now it’s very easy to get dressed. 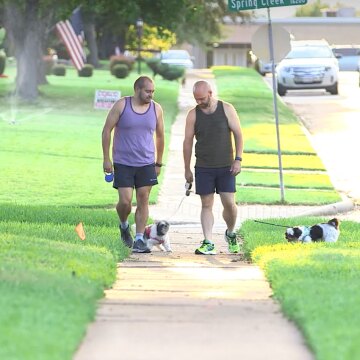 Zohar: My palate has changed in some ways, too. Before surgery, I could eat a whole avocado with a spoon. Today, I get nauseous if I try that. The texture is a little too creamy and rich.

We also look for alternatives to certain foods, like pizza crust. My latest recipe is a ground chicken-based crust. I mix it with seasonings, form it into a dough shape, bake it and then top it like a pizza.

Stephen: It’s my favorite pizza! I crave it. Before surgery, we’d eat out for breakfast, lunch and dinner some days—and eat to our eyes’ content. Now we eat at home much more. And if we do go to a restaurant, we’ll split an entree.

Zohar: We also look at nutrition facts for every product we eat. The quality of the food has to be good—nothing too fried, nothing too sugary. And we work with a nutritionist who gives us all the information we need to eat healthy.

We eat liquids and solids separately. We wait 30 minutes for our food to fully digest, then drink. It helps our body recognize that we are full; otherwise, liquids push things through our system too quickly, and we keep eating.

Stephen: One of the main motivations for surgery was that I didn’t want to eat as much as I was eating. I used to think: Life’s too short, I should eat the pizza. Now I’m satisfied with: Life’s too short—I can eat one slice of pizza.

Zohar: We love our life. We go spinning; we take lots of walks with our three Shih Tzus. We try to be active, but not crazy.

My biggest regret is that I didn’t do this surgery earlier. When you look at the value of your relationship, it starts to hit you: You want to be there for a long time.