Talent for Good: "My Company Let Me Take a Month Off Work to Volunteer"

Share
For World NGO Day, meet four Johnson & Johnson employees who signed up for a new company pro bono program that enabled them to take a leave from work to help nonprofits in Latin America advance their missions.
By Alice OglethorpeFebruary 26, 2018
Today's Top Reads Close
I

n the fall of 2017, Johnson & Johnson employees in North and Latin America were presented with an unusual opportunity.

Their mission, if they chose to accept it: pack their bags for a four-week stint in Latin America, where they'd use their skills to help nongovernmental organizations (NGOs) run more efficiently, overcome unique hurdles and better reach their goals.

The program, Global Pro Bono, is part of a new company initiative designed to tackle social causes by harnessing the power of its most powerful resource—its people. It's an offshoot of a successful program known as the Corporate Citizenship Trust Secondment Program that's been offered to company employees in Europe, the Middle East and Africa since 2014.

“Through the Secondment Program, employees agree to take a six-month assignment away from their jobs to help a nonprofit grow and be more successful,” says Yezenia Ramos

Yezenia Ramos,Senior Manager, Employee Engagement, Johnson & Johnson, Senior Manager, Employee Engagement, Johnson & Johnson. “The participants come back as different people—that's how moved they are by their experiences. We wanted to create a similar opportunity for employees in North America and Latin America that didn't require as much time away.”

Ultimately, 11 employees were selected to participate in the program's inaugural year—which wound up being just as impactful as Ramos had hoped.

But don't just take our word for it. Hear from four members of the freshman Global Pro Bono class, who share what it was like to do good through work thousands of miles from home—and return home with a newfound sense of purpose in life. 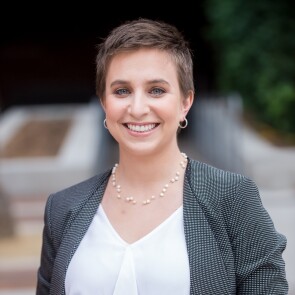 When Lifson first heard about Global Pro Bono, “I thought it was a cool idea, but I never believed I could leave work for an entire month,” she says.

But once she learned more about the program from someone on the Johnson & Johnson Global Community Impact team, which oversees the program, she changed her mind. “The approval process happened so quickly, and my boss was so supportive, that before I knew it, I was going!” she says.

Where Lifson was going turned out to be southern Mexico to work with Compañeros en Salud (Partners in Health), which operates health clinics and works to strengthen healthcare systems in rural areas. Lifson's job: brainstorm better ways to raise awareness and funds for the NGO.

She was certainly well-equipped for the challenge. “In my day job, I do strategic communications around sponsorships," she explains. "So I knew I could help the NGO find common ground with potential donors." 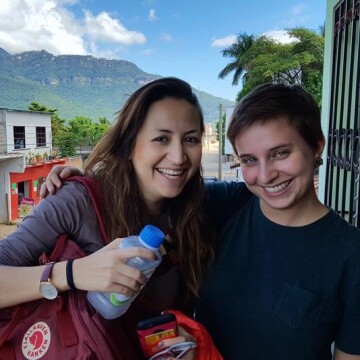 Lifson with a fellow Johnson & Johnson employee in Mexico

Working with a fellow Global Pro Bono participant from Colombia, Lifson canvassed the fundraising landscape, wrote up messaging templates for the NGO and created a plan for the organization to follow once the four weeks were up.

Lifson found time to seek out new and enriching experiences off the job, too.

“There were some amazing moments—like when I made fresh tortillas with a volunteer’s family, and tried eating crickets!—but also some stark reminders of what we were up against,” she says. “It’s hard to describe how remote some of these communities are—we'd drive for hours on a dirt road to reach people who needed care. In my day job, I don’t do actual healthcare delivery, so this enabled me to see what that can look like up close.”

I met moms whose babies had cleft palates and cleft lips, and I realized how similar all babies are—they just want to smile. A simple surgery could help change all of that.

Helping an NGO in Guatemala That Helps People Get Surgical Care 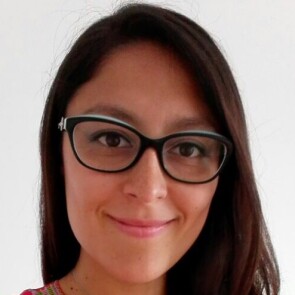 Volunteering was nothing new to Baltazar—she’s donated her time to help sea turtle habitats and rebuild houses in Mexico City following the 2017 earthquake. But spending four weeks helping Asociación Compañero Para Cirugía (Partner for Surgery) in Guatemala took her philanthropy to a new level.

Baltazar was tasked with helping the NGO—which organizes missions to help patients in urgent need of operations, like children with cleft palates—come up with a complete communications strategy. “This was a stretch from my role at Johnson & Johnson, working in IT, but I majored in journalism in college," she admits. "I was excited to be involved in more social kinds of work again.”

Once in Guatemala, she quickly learned that her job required more than simply putting pen to paper.

“One main issue they had was the need to create their own identity. They're financially supported by Partner for Surgery in the United States, but they want to be empowered to be more independent and raise their own funds, too,” Baltazar explains. “In order to develop a communications plan, they first had to address some bigger issues. So I met with the local board and came up with new ideas around governance, programs and objectives." 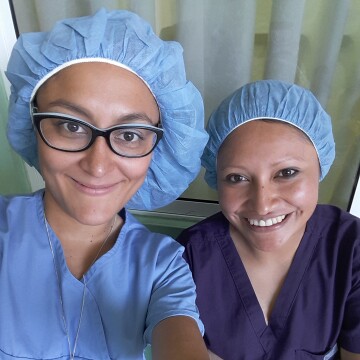 Baltazar with a Partner for Surgery medical worker

Baltazar also reviewed vision and mission statements. "Knowing the NGO's strengths, remembering its origins and confirming that those statements were still valid were important to finding the key messages and strategy that will help them raise more money," she points out. "Enabling them to see what they really needed felt great.”

So, she says, was getting to see firsthand the impact of her work.

“I met moms whose babies had cleft palates and cleft lips, and I realized how similar all babies are—they just want to smile,” she says. “A simple surgery could help change all of that.”

Helping an NGO in Peru That Helps Fight Childhood Anemia 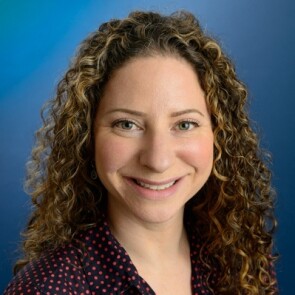 Smith grew up understanding the importance of helping others—she was born in Ghana while her dad was there helping the African country set up a Ministry of Health.

“So when I saw the email come in about Global Pro Bono, I thought: What a cool opportunity," she recalls.

A few weeks later, she was saying goodbye to her husband and 4-year-old daughter and boarding a plane for Peru, where she was going to help an organization called INMED Andes.

Her mission: assist in the creation of a national program to fight childhood anemia (which can be caused by intestinal worms) by delivering deworming medication to kids in need.

“It was like the role was written exactly for me,” says Smith. “They needed someone with experience in business planning, supply chain management and scaling up new technologies—all things I’ve done at Johnson & Johnson. Plus, I speak Spanish!”

The work, though, wound up being tougher than she'd imagined.

“In a country with many distinct communities and stakeholders, I had to figure out how to get them all to understand how important the deworming initiative was."

She also worked with the NGO to simplify the traceability of medications. INMED had asked the volunteers to track each tablet of medicine to each community and the child to whom it was distributed—a daunting task, to say the least. To make it more manageable, Smith asked questions and determined that the real need was to measure the overall rate of medical coverage.

"I realized that could be accomplished by simply capturing the number of kids treated in each district, which was a much more feasible goal," she says. 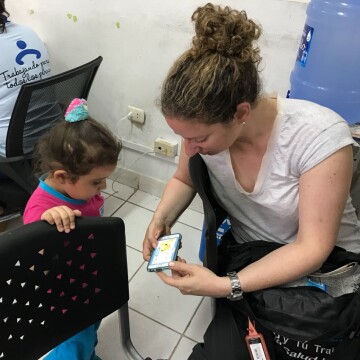 Smith working with a child in Peru

The challenges she faced in Peru also had an upside for her on a professional and personal level.

“One day, I was sitting in a hot room in the middle of the Amazon, trying to figure out how to gather data about the administration of the drugs," she recalls. "I felt self-conscious because of my accent and lack of expertise, but we weren’t really getting any helpful information. So I decided to show my ignorance and start asking a lot of questions—and we got so much amazing insight!"

Now, Smith is using the same strategy back at her job in Canada. When she's feeling unsure, "I recall my time in the Amazon and forge ahead," she says. "I’m humble, share what I’m seeking to achieve and ask questions.”

I saw how important it is to not be overwhelmed by complex problems—everybody can do something to help. You just have to decide to do it. That realization has totally changed the way I see the world.

Helping an NGO in Brazil That Helps Families Overcome Poverty 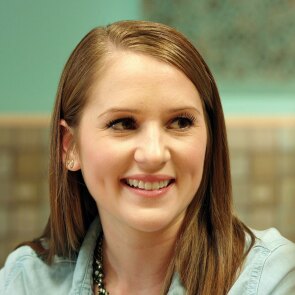 As soon as Pelz learned about the chance to take a Global Pro Bono sabbatical, she thrilled to the idea of getting out of her comfort zone. There was just one thing holding her back—she'd just started a new role at Johnson & Johnson.

“I was nervous about already asking my boss to take a month off,” she says. “But she saw it as a great opportunity for professional and personal growth."

Next stop: Brazil, where she would work with Saúde Criança, an organization that helps to get families out of poverty by giving them personalized two-year action plans, along with support to achieve them. Pelz was tasked with creating a new marketing plan that might solicit more corporate donations.

“It was outside the scope of my day-to-day job, but I was passionate about learning more about marketing," she says. "Plus, my role back home requires collaborating to make things happen quickly—skills that I could use in Brazil."

She also already had practical experience in bringing non-profits and corporations together: She had coordinated bone marrow donor drives at Johnson & Johnson through the charity Be The Match after undergoing her own transplant in 2014. 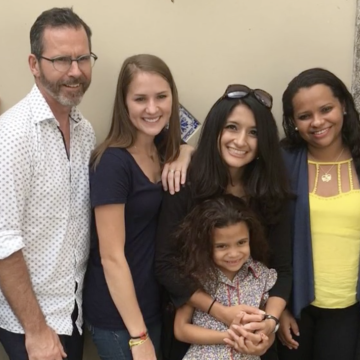 Pelz with Saúde Criança teammates and a young client

That accrued wisdom enabled Pelz and four other company volunteers to diagnose quickly Saúde Criança's key problem: “They needed to streamline their marketing materials, which were verbose and confusing," she recalls. "One of my favorite things we created was a gripping one-pager that could show readers in a simple, visual way the impact a donation could make.”

The NGO had a big impact on Pelz's day-to-day thinking, too.

“This organization tries to fix huge issues, as opposed to putting a bandage on,” she says. “I saw how important it is to not be overwhelmed by complex problems—everybody can do something to help. You just have to decide to do it. That realization has totally changed the way I see the world.”