Share
Save the Children, a longtime partner of Johnson & Johnson, has created unique education programs in Lebanon to help displaced refugee children thrive. We traveled to the region to tell the stories of some of these amazingly resilient kids and their families as they rebuild their lives.
By Lauren BohnOctober 17, 2017
Today's Top Reads Close
I

t had been awhile since 33-year-old Asma* saw her 4-year-old son Ahmed smile.

But on a hot summer morning in the hills outside Beirut, Ahmed walked into a Save the Children Early Childhood Development (ECD) Learning Center, and for the first time in months, he giggled at the sight of children mimicking the movements and sounds of their favorite animals.

“This is the first time he has ever been inside a classroom … he’s nervous,” Asma says, while Ahmed tugs on her arm. “He was born here in Lebanon, but you can tell he doesn’t feel at home. I don’t think anyone does. Our country is so close, but so far.”

Asma and her family fled Syria five years ago after shelling nearly destroyed their home. When her older children narrowly escaped a barrel bomb that tore through their kitchen, Asma knew it was time for them to leave. They departed with little more than the clothes on their backs. Asma didn’t have time to take her favorite teacups or photo albums full of cherished family memories. Life as they knew it was gone in just one afternoon.

“Starting over has been hardest on the children,” she says. “If it weren’t for spaces like this, we wouldn’t know where to find color.”

Since the civil war in Syria began six years ago, the number of refugees who've fled for neighboring countries has topped 5 million, according to the United Nations High Commissioner for Refugees (UNHCR). Asma and her family are among more than 1 million refugees—including nearly 500,000 children—who’ve fled to Lebanon alone.

Lebanon is educating Syrian children in public schools through a “second shift” system of additional afternoon classes exclusively for them. But according to Human Rights Watch, half of refugee children living in Turkey, Jordan and Lebanon are not attending school because families can’t afford the costs or they're relying on their children to work.

Through the support of partners like Johnson & Johnson, Save the Children is working to change that by providing access to quality ECD and psychosocial support activities to help build the resiliency of children like Ahmed. 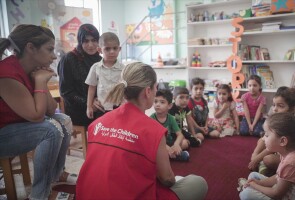 For example, through the organization’s Healing and Education Through the Arts (HEART) program, teachers use arts and creative teaching methods to help children process and communicate feelings related to their life-changing experiences.

“This is not a situation that is going away anytime soon,” says Benjamin Davies

Benjamin Davies,Partnership Director at Johnson & Johnson Corporate Citizenship Trust, Partnership Director, Johnson & Johnson Corporate Citizenship Trust, which has been supporting Save the Children's work with Syrian refugees since 2015. “So in 2017, we decided to move from humanitarian support to longer-term health system strengthening. As such, we are focusing on building the resilience of children and the communities in which they live.”

Naheed Bashir—head of teachers at the ECD Mount Lebanon site, which uses HEART methods within its daily activities—says the program has been a breakthrough in helping children like Ahmed who've never had the chance to be actual kids.

“The majority of the children here have no structure,” she says. “Their childhoods have been taken from them, so before they can ever learn, we need to give them space to learn through play in a safe space.”

You never get used to the pain—it becomes part of you. But these classes make me a better person. I have to stay positive. The only way we can keep hope for our children and for our future is through education.

— Laila, a refugee who participates in Save the Children's Positive Parenting classes

Bashir says it’s not unusual for children like Ahmed to have some mild to severe psychological issues that can impede learning and socializing. In fact, she often sees children act out violent games or draw violent scenes they’ve seen on television or, worse, real life.

Asma tried to bring Ahmed to the center last year, but he couldn’t stand to be separated from her. While he’s too young to process all that has happened to his parents, Asma says their home brims with conversation about the war—and her son knows his grandparents are still there.

“He sees me crying almost daily,” she says, holding back tears. “Without a doubt, he’s affected. It’s hard to shield children from the pain.”

Ahmed isn’t unique. His new classmate, 6-year-old Aliaa, could barely speak before she started kindergarten at the center, a two-floor building filled with colorful children's drawings and more toys than many of the kids likely have at home in the makeshift dwellings they live in.

“We didn’t know if she was mute or had comprehension issues,” says her teacher, Waheeda Hadam. After six months of thoughtful teaching and interaction with classmates, Hadam says Aliaa is "a whole new child."

Aliaa’s mother, Laila, blames herself for much of her daughter's worries.

“Aliaa was only 2 years old when we fled Syria, but I’m surprised by how much she remembers,” she says. “Sometimes she asks, ‘When are we going home?’ I have no answers for her.”

While Aliaa is in class, Laila and other mothers attend Positive Parenting classes offered by Save the Children.

“You can’t just teach the students,” Hadam says. “Parents have to be involved in the process, as well. They are often stressed, so we need to create spaces for them where they can talk about their problems but also learn ways to communicate and play with their children.”

“You never get used to the pain—it becomes part of you. But these classes make me a better person,” Laila says. “They teach me that, for my children to be calm, I have to be calm. I have to stay positive. The only way we can keep hope for our children and for our future is through education.”

Giving and Getting Back Through Teaching

For teachers at the ECD center, like 28-year-old Idris Wafa, working with children has been a way to process and work through his own pain and trauma. He fled Damascus just eight months ago.

Every morning, he takes three buses and travels nearly two hours each way to the Save the Children ECD center in Mount Lebanon, where students greet him with big hugs.

“When I teach them a new song or the alphabet, it makes me feel like I’m back in Syria, like I’m still contributing to their future,” he says. “We can’t just all be a lost generation. We have to move forward. What’s the alternative?” 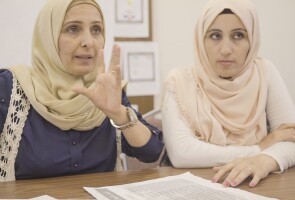 Fatima Qasa, a mother of three children, says there simply is no alternative. And when Save the Children knocked on her door one day during an enrollment campaign to register children for their ECD programming, a lightbulb went off in her head.

“I don’t have to just be a refugee in Lebanon. I can be a teacher,” she recalls realizing. “I can help not only my children, but other children.”

So Qasa did one of the most courageous things she’s ever done: She asked for a job.

Qasa and her family fled Syria in 2013, and rebuilding their lives in Lebanon has been no easy feat. Her husband used to run a prosperous market in northern Syria, but in Lebanon, he is forced to do day labor work.

The average monthly salary in Lebanon is approximately $400 a month, but rent can be more than $500, leaving many refugees struggling to make ends meet with just one job.

The Gift of Resilience

Lebanon’s scenic Bekaa Valley, near the Syrian border, is dotted with thousands of informal refugee settlements. Across its wide-open sepia-toned fields, refugees have built new lives with little more than tents and concrete slabs.

Seven-year-old Reem lives in a tent community on an old potato field. Her mother fled Syria with Reem and her two siblings three years ago. Reem’s father was unable to leave and has been in Syria ever since. 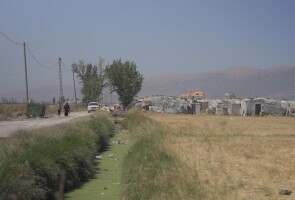 A tent community in the Bekaa Valley

“She misses him,” her mother, Amira, says, her face folding into tears in her makeshift kitchen composed of just a few pots and pans. “We all miss him.”

Two months ago, Reem had never stepped foot inside an early Learning Center. Now she's one of the best students at her Save the Children center, supported by Johnson & Johnson, just down the street from the settlement. Every morning she walks into “The Theater,” as they call the classroom, where her teacher reminds her that she’s a star.

“When she came, she was withdrawn,” says her teacher, Malika Badaa. “Since then, she learned the alphabet so quickly. She is the perfect example of a child who blossoms with just a little guidance.”

These kids come to us and you can tell by their eyes they’re full of fear. They aren’t used to their lives shrinking like this. But these children are resilient. And we’re trying to teach them that resilience is everything. Because it is.

Back in her home after an afternoon of playful learning and art, Reem’s grandmother asks her what she learned that day. Reem recites the alphabet, and the whole tent breaks out into applause.

Before attending school, Reem didn’t have many friends and would sit in the tent all day, uninterested in interacting with other children. Today, she and her friend Heba are nearly inseparable.

“Every morning, Heba opens her eyes wide and wants to go to school. She even wants to sleep with her name tag on. These programs restore their souls,” says Heba’s mother, Haya, who attends Save the Children’s Positive Parenting classes. She and her husband work as cucumber farmers to support their family.

"Before coming to school, I was bored," Heba says, while running her hands over her green dress. "Now I've made friends and have fun and learn."

Benor Reeda, a Syrian refugee who teaches at the center, says the children constantly remind him to be resilient.

“These kids come to us and you can tell by their eyes they’re full of fear,” he says. “They aren’t used to their lives shrinking like this. I’m not even used to it sometimes, so how can they be? But these children are resilient. And we’re trying to teach them that resilience is everything. Because it is.”

Back north in Mount Lebanon, Ahmed has finished with school for the day. Asma snaps a few photographs of him on her cellphone and uses WhatsApp to send them to relatives in Syria.

Another mother gives Asma a hug. “We’re doing the best we can,” she says. Asma gently nods.

“I want them all to have good futures,” she says. “To be important, loving people. Most of all, I want them to be proud of themselves. That is all we want.”

*The names of all mothers, teachers and children have been changed for their safety

Want to meet more amazing teachers who are part of this impactful Save the Children program? Watch this video, which features a teacher from the Mount Lebanon Learning Center: 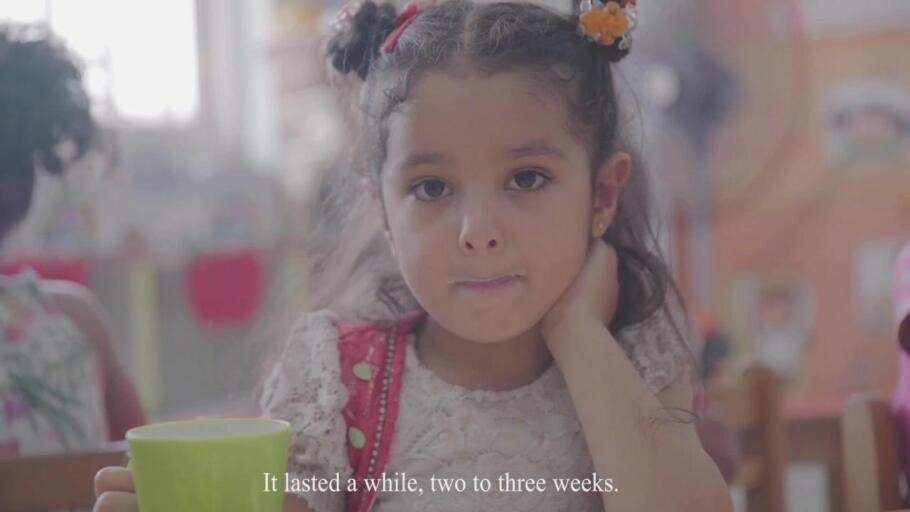 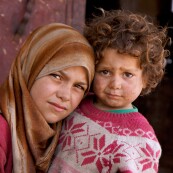