Share
Since 1988, Johnson & Johnson has partnered with Operation Smile to help under-served children. One employee shares the life-changing experience of participating in a volunteer mission in Vietnam.

ast month, I had the rare privilege of seeing a child’s life transformed right before my eyes. It happened during a two-day medical mission in Hanoi, Vietnam, with Operation Smile, a charity dedicated to providing free cleft lip and cleft palate surgeries for children in more than 40 low- to middle-income countries around the world.

Every three minutes, a child with a cleft condition (a gap in the lip or roof of the mouth) is born. In most developed countries, the condition can be repaired with a relatively simple surgical procedure within the first few months of life, but with almost 5 billion people lacking access to safe and effective surgeries around the world, even a simple procedure like this may not be possible.

As a result, these children can face serious health issues, such as difficulty with eating that can lead to malnutrition or starvation, and recurring ear infections that can cause hearing loss. And that’s not even mentioning the social isolation and bullying that often happens.

Since 1988, Johnson & Johnson has provided the sutures used in Operation Smile surgeries—and since our partnership began, more than 100,000 children have had surgeries. 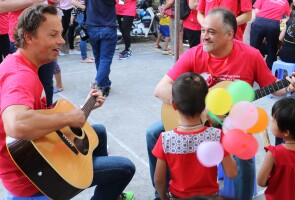 Sterkens and Rodriguez strum their guitars for some patients

Putting a Smile on Everyone’s Face

Every child helped by Operation Smile has a unique story, and when my team and I arrived at the hospital in Hanoi for our group volunteer medical mission, our first task was to provide a supportive, stress-free environment for each of them.

Many of the families scheduled for surgery had traveled overnight by bus to get to the hospital, so by the time they arrived, the children were tired, hungry and scared. Parents had to put aside their own fears to remain positive and calm their children as they were being screened by medical staff to ensure they were fit for surgery.

Rowena Yeo, Vice President of Information Technology for Janssen Asia Pacific, put into words how we all felt: "With every patient who came through, I secretly prayed they'd be eligible for surgery."

People say music calms the soul, and I had no hesitation in teaming up with Cesar Rodriguez, Managing Director, Xian Janssen, to play some classic songs on our guitars. This broke through the language barrier, and parents and children alike sang along, making for a far more relaxed environment.

It was that afternoon that I met Phuc (pronounced “foo”), a 6-month-old baby from a rural village outside Hanoi. At first, Phuc, who was born with a cleft lip, seemed scared and overwhelmed by all the new faces, but it didn’t take long for him to warm up and show us his jolly personality. He was soon grabbing my nose as I tried to tickle him, and he even let me hold him while his mother, who was doing her best to stay strong despite her obvious nervousness, took a break. 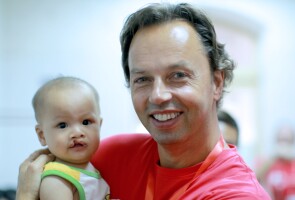 Sterkens with Phuc before his surgery

Phuc was just one of 80 children who were operated on the next day. I was astounded by the collaboration, professionalism and humanity of the surgical teams, who performed two operations at a time, every 45 minutes, with a standard of care that was second-to-none.

It was my role that day to carry baby Phuc from the operating room to his mother in the waiting area. She was too emotional to speak, but I saw her eyes flood with relief, gratitude and joy as she embraced him. It was an incredibly special moment that reminded me that the opportunity to change the course of someone’s life is the reason I work for Johnson & Johnson—and how fortunate I am to partner with compassionate colleagues who share this belief.

One of those colleagues—Chris Hourigan, President, Janssen Japan—told me that the two days of our medical mission were the most emotional and most rewarding of his career.

Providing a life-altering surgery through Operation Smile costs $240. I’m proud to work for a company that has pledged a five-year, $25 million commitment, including surgical supplies, to help Operation Smile continue to improve the lives of children and their families. That’s a lot of smiles to go around.