254
Learn how a group of more than 180 employees in Poland organized to get more than 4,000 boxes of food and care items weighing 24 tons total to colleagues in their neighbor country—following a long Johnson & Johnson legacy of providing aid to people in crisis around the world.
By Linda RodgersApril 12, 2022
Today's Top Reads Close

When Tomasz Piechal first learned in late February of the brewing conflict in Ukraine, he was shocked.

“You wouldn’t expect such a thing to happen so close by,” says Piechal, who’s a General Manager for Central Eastern Europe at Johnson & Johnson MedTech and is based in Warsaw, Poland. “In Poland, we’ve lived and worked with people from Ukraine for many years and have a huge heart for them."

“From day one of the crisis, we began hearing that there was a huge willingness from employees to do something to help,” he says.

Collecting the Items That Matter Most

Johnson & Johnson has been involved in disaster relief for more than 100 years, having historically sent supplies and donations to people all over the world during times of trouble, including the Syrian refugee crisis, Hurricane Michael and the Ebola outbreak in West Africa.

Most recently, Johnson & Johnson stepped in to support its employees in Ukraine—as well as their families—by providing access to lodging and financial resources. The company is donating $10 million to the International Rescue Committee and International Federation of Red Cross and Red Crescent Societies (IFRC) to support refugees in Ukraine's border countries. It's also giving Americares, Direct Relief, IFRC, International Health Partners, Save the Children and UNICEF—global health organizations with which it has longstanding partnerships—access to its supply chain network to strengthen their reach and capabilities during this time.

Still, the company’s Polish employees wanted to do their part to help their coworkers in Ukraine. 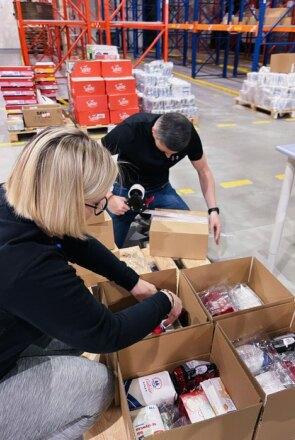 During a meeting of the local Polish crisis management team—which was formed in 2020 with the goal of implementing COVID-19 safety measures at company offices—a member who’d been in touch with employees in Ukraine shared their need for food and other essential goods.

Piechal became the coordinator of the effort to gather products for shipment.

“When I sent the first email to employees in Poland that we would be doing this, I immediately got a lot of responses from people who wanted to volunteer, either to donate products or to come and do something in person,” he says.

He sent out a list of requested items, including such nonperishable foods as pasta, rice, lentils, beans and tuna as well as everyday items like soap, water, toilet paper, shampoo, toothpaste, diapers and feminine hygiene products.

“We also provided some chocolate and sweets, because we wanted to give employees’ children a bit of the bright light of childhood,” says Piechal.

Next, he gathered a team to help him organize the collection. People dropped off donations at their offices across Poland or at a Warsaw warehouse. Then, over the weekend of March 6 and 7, groups of people showed up in waves to pitch in and pack products into boxes, arriving as early as 8 AM.

“It was a really huge group of people. I even saw people in the warehouse who’d traveled for four hours one way to do this voluntary job,” Piechal says.

After the job was finished, volunteers who’d just arrived still wanted to contribute. “They said, ‘Okay, the boxes are already packed, but maybe you still need me to clean up the room or whatever. I still want to come and help,’” he recalls.

Harnessing the Power of People

By the end of the weekend, more than 30 volunteers had packed 4,200 boxes weighing a total of 24 tons.

The next step? Loading them onto two trucks that are currently bound for Ukraine.

Each care package contains enough food and items to last 30 days. If there is still a need for supplies after that, the Polish crisis team will repeat the process.

“We already have the know-how, and we know the power and energy of our people, so I’m confident we can repeat the same job as many times as it will be required,” Piechal says.

An effort to organize care packs for Ukrainian employees who were evacuated to Poland is currently underway. And some Polish employees have created an informal buddy system to help their Ukrainian colleagues acclimate themselves to Polish life, whether it’s knowing how to enroll their kids in school or figuring out the banking system.