Share
The cell's mitochondria generate 90% of a body's energy. Could scientists harness that power to fight disease and perhaps even aging?
By Renee MoradJanuary 09, 2018
Today's Top Reads Close

Scientists often refer to the mitochondria as the energy factories of the cell. For good reason. The intracellular organelles transform the food we eat and the air we breathe into an electric potential that drives processes like DNA replication or protein building. Individually, the impact of any given mitochondrion is small. The potential energy within a cell is about 0.2 volts. But add all those cells up, and the potential energy within a human body is roughly equivalent to a lightning bolt.

Doug Wallace — director of the Center for Mitochondrial and Epigenomic Medicine at the Children’s Hospital of Philadelphia Research Institute, and the 2017 winner of the Dr. Paul Janssen Award — has been studying mitochondria and their DNA for 50 years. More than anyone he understands the importance of mitochondria. “They generate more than 90% of cellular energy,” he says. “Anything that generates that much energy can't be trivial.”

And yet mitochondria, for all the energy they contribute, have been largely overlooked in medicine. “All the clinical subspecialties are based primarily around anatomy, and so you have neurologists, ophthalmologists, cardiologists, nephrologists, dermatologists and so on, but that model doesn't take into account mitochondria,” says Wallace. “Since different organs rely on mitochondrial energy to different extents, partial mitochondrial defects result in organ-specific symptoms.”

That's now changing. Led by Wallace, scientists are now digger deeper into the role mitochondrial disease might play in many of our most pervasive diseases and even into aging itself. The idea is nothing short of a paradigm shift, viewing energy broadly rather than organs specifically. And if Wallace is right, that idea could change millions of lives for the better.

In the past, scientists have frequently looked to nuclear DNA for answers about disease and aging, but Wallace believes mitochondrial DNA could be the missing link that can steer them toward new understandings about disease, and potentially, new therapies. 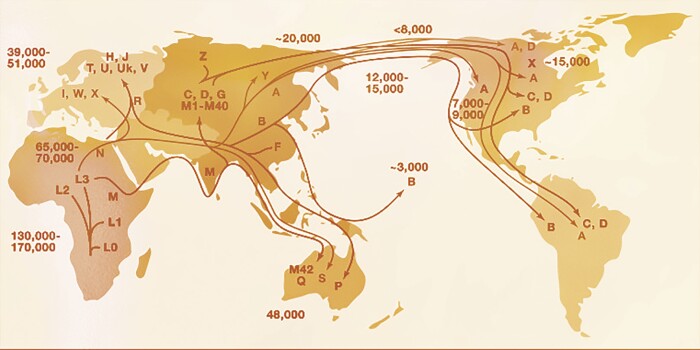 Using mitochondrial DNA, Doug Wallace was able to retrace the migration of humans out of Africa.

Most DNA, called nuclear DNA, is located in the nucleus of our cells, and contains two copies of each gene, of which there are more than 20,000. For each gene, one copy is inherited from the mother, and another is inherited from the father. But mitochondrial DNA, inherited exclusively from the mother, is much smaller and is located outside the nucleus, inside the mitochondrion. The mitochondria turn food’s hydrogen and carbon and inhaled oxygen into carbon dioxide (CO2), water and adenosine triphosphate, or ATP, which stores energy.

In 1980, Wallace discovered that mitochondrial DNA changes over time by sequential mutations. “Since almost everybody has a slightly different mitochondrial DNA that makes for different efficiencies in mitochondrial function, this creates a lot of energy diversity, which is good for adapting to changing environments. But it also means mitochondria are very important in susceptibility to disease,” Wallace says.

“My belief is that mitochondrial dysfunction underlies the etiology of most common complex diseases, as well as aging,” Wallace says. He explains that a person suffering from chronic headaches might see a neurologist, but there’s also the possibility that “there’s a systemic energy defect causing the headache. There’s nothing wrong anatomically with the brain.” Wallace believes the same can be said for problems with the heart, muscles, and renal and endocrine systems.

In 1988, Wallace found the first inherited mitochondrial-DNA disease, called Leber’s hereditary optic neuropathy, which leads to vision loss. By the early 2000s, hundreds more mitochondrial-DNA diseases were discovered. Many of these genetic disorders starve the body’s cells of energy and come with symptoms such as seizures, respiratory problems and intellectual disabilities. Wallace’s website called MITOMAP.org outlines all the known polymorphisms and pathogenic mutations, of which there are hundreds, that have been found in mitochondrial DNA to date.

Wallace believes that mitochondrial polymorphisms may be important for humans’ predispositions to a variety of diseases. Recent studies suggest that mitochondrial DNA variations could lead to everything from autism, cancer and inflammation to neurodegenerative diseases. For example, one recent study, conducted by the Memorial Sloan Kettering Cancer Center and the Boston-based Cambridge Institute, suggests in many types of cancer, tumor cells have fewer copies of mitochondrial DNA than the cells that make up normal tissues. The researchers also discovered that the number of copies of mitochondrial DNA in certain tumors is related to the incidence of mutations that cause cells to become cancerous — a finding that could help direct new treatments for these tumors.

Mitochondrial DNA also plays a role in aging. “Over time, we accumulate more and more mitochondrial-DNA mutations that slowly erode our energetic capacity,” Wallace says. “As people get older, this is why they often complain that they don’t have the energy that they used to.”

More important, their cells and organs don't have the energy they need to function and maintain themselves. Wallace believes this could lead to a number of age-related diseases, such as Alzheimer’s and Parkinson’s diseases. For large, energy-intensive organs — the brain uses 20% of the body's energy, for example — any change in energy output can have a profound effect on function. 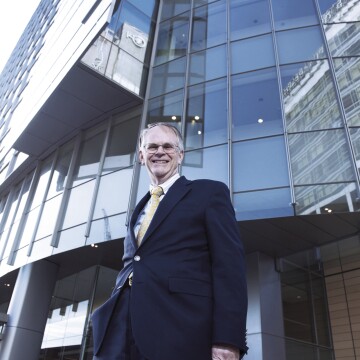 Cellular energy, according to Doug Wallace, could be the key to future disease treatment.

In the 1970s and ’80s, Wallace pioneered the concept of maternal inheritance, and he used that pattern to identify the most recent common ancestor of all contemporary humans, the so-called Mitochondrial Eve (a term Wallace does not particularly like). In doing that work, Wallace noticed that human migrations were usually accompanied by mutations in mitochondrial DNA, which allowed our species to exploit new environments. That helped us as a species proliferate, but now it’s presenting new challenges. For example, someone with mitochondria adapted to an active lifestyle, low-fat diet and hot climate might be maladapted to a more the sedentary lifestyle and high-fat diet common in colder climates.

“The caloric intake and climates of many individuals are no longer in sync with their genetic history,” Wallace says. “It also explains why people with certain ancestral lineage might be more susceptible to certain types of diseases.”

In most genetic studies that have looked for associations between genes and diseases, investigators focus on variations in nuclear DNA, not mitochondrial DNA. And yet, after decades of research, it's evident that nuclear DNA might not contain all the answers scientists seek.

“We’ve completely ignored energy in Western medical philosophy,” Wallace says. While Alzheimer’s disease patients assume they need to see a neurologist, Wallace explains, nobody in the West is going to suggest a biochemist instead.

Wallace is confident that a more holistic approach to medicine and a greater emphasis on energy’s role could bring forth new preventions and treatments for disease in the future. He’s also certain that the significance of mitochondrial DNA should play a more prominent role: “You can’t live without energy,” he says.

Meredith Hardy’s sons are living life to the fullest despite their devastating diagnosis. 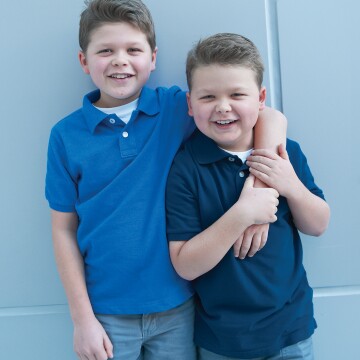 The story of brothers Lachlan and Niels offers hope for those suffering from mitochondrial disease.

About 18 months after her second child was born, Hardy had a painful realization. Her children were not normal. Her youngest son, Lachlan, almost died when he was three weeks old. She spent most of his infancy reviving him because he had a hard time breathing and sleeping at the same time. Her older son, Niels, started with acid reflux and chronic constipation. Then, he had frequent sinus infections, and his balance and speech were affected. He also had frequent vomiting and unexplained fevers.

After countless appointments and no diagnosis, Hardy and her family uprooted from Charlotte, North Carolina, to Philadelphia to be close to the Children’s Hospital of Philadelphia. She thought someone there might know what was happening to her boys.

Hardy’s doctor at Children’s Hospital of Philadelphia immediately suspected mitochondrial disease, which was ultimately confirmed by a muscle biopsy.

Mitochondrial disease is an inherited chronic illness that can be present at birth or developed later in life. It impacts an estimated one in 4,000 people and can cause debilitating physical, developmental and cognitive disabilities with symptoms ranging from poor growth and loss of muscle coordination to seizures, vision or hearing loss and organ failure.

Today, the boys, now 13 and 11, are committed to a rigorous treatment plan, which includes immunoglobulin therapy, steroids, seizure medication, a custom cocktail of supplements and two hours of intense interval exercise daily. They are thriving, and they represent hope for other families experiencing similar challenges. "We’ve helped more than 60 families so far with advice and by sharing our treatment plans," Hardy says.

This article was produced for Johnson & Johnson Innovation by Scientific American Custom Media, a division separate from the magazine's board of editors