Share
An app to distinguish reality from hallucination, a probiotic for acne and a lifesaving pump for heart-failure patients. These are but a few of the brilliant ideas from promising healthcare start-ups.
By Charles Choi, Renee MoradDecember 18, 2017
Today's Top Reads Close

A drug’s effect depends on its target. More than half of all prescribed drugs, including antihistamines and opiates, target a family of hundreds of proteins known as the Gprotein coupled receptors (GPCRs). These molecules help cells talk to each other, and play key roles in cardiovascular, gastrointestinal, hormonal and neurological disorders. However, current drugs only target a few dozen of these GPCRs.

To find new drugs that activate or deactivate GPCRs, Ab Initio Biotherapeutics works primarily with large, diverse sets of antibodies to determine which variants best interact with a target or exhibit a desired function. The company's scientists then create more variants that resemble the most successful proteins, says Ab Initio’s co-founder, CEO and president, Kenneth Lin. In 2016, the San Francisco-based firm partnered with Pfizer to help it engineer antibodies that could activate an undisclosed GPCR. According to Lin, Ab Initio is also working on a therapy targeting MC4R, a GPCR strongly linked with appetite.

2. Back to Reality by App

The Toronto-based digital health innovation company App for Independence, or A4i, is developing clinically proven mobile interventions to help patients with schizophrenia and psychosis, and their caregivers, better manage symptoms. A4i is a joint venture between The Center for Addiction and Mental Health in Canada and digital health solution provider MEMOTEXT. This company developed an app from evidence-based content that helps patients prepare for everyday tasks. It can be set up to provide reminders and a feed with evidence-based and peer-to-peer support. Users can also give it access to a device’s microphone to use an ambient sound recorder, which is designed to help individuals understand if sounds are real or hallucinations. As explained by Amos Adler, CEO of A4i, “If we can succeed in automating some risk identification and creating relevance for patients with our personalization algorithms and machine learning, then we can succeed in creating engaging support for patients beyond the walls of the provider setting.”

Roughly 1 million sexually transmitted infections are exchanged each day. If untreated, they can lead to cervical cancer, pelvic inflammatory disease and infertility. However, people are often reluctant to ask their doctors to test for such infections, so Eve Medical in Toronto developed a kit for women to screen themselves.

“It started when I found out that several of my friends had been avoiding their screening tests for years, and I realized a lot of them were seeing this as a necessary evil instead of something positive they were doing to take care of their health,” says Jessica Ching, Eve Medical co-founder and CEO.

Women can order Eve Medical’s kit online — deliverable anywhere in Canada, and soon to more areas — to collect samples themselves. They send samples to a lab in a prepaid box and can read their results on the company’s site. Counseling sessions with licensed physicians are available after women get their results. Currently Eve Medical screens for human papillomavirus (HPV), chlamydia and gonorrhea.

4. A CAR-T of Cancer Therapies

San Francisco-based Chimera Bioengineering is developing gene sequences that, when plugged into CAR-T cells, can help scientists control the immunological response with specific drugs. For example, they can boost the number of CAR proteins to make T cells more likely to bind to diseased cells than healthy ones, or decrease the number of CAR proteins to reduce the T cells’ potentially dangerous inflammatory responses. “It’s like a remote control for your TV, but instead of an electromagnetic signal, the drug is the controlling signal,” says Ben Wang, co-founder of Chimera Bioengineering. 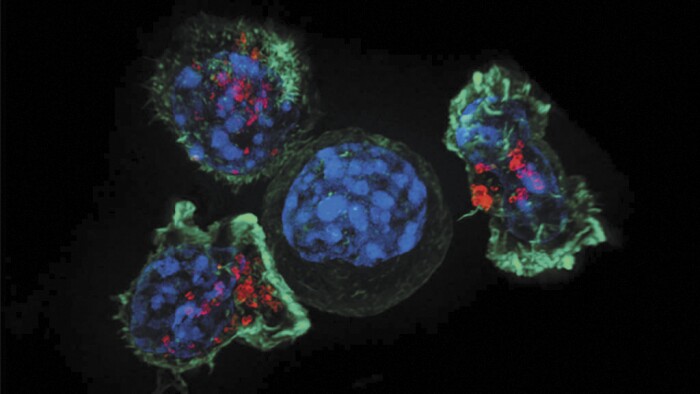 T cells (green) can be tailored to find, surround and attack a patient's cancer cells (center)

Your face is covered in bacteria, and much of it is Propionibacterium acnes. Most strains are linked with healthy skin, but certain ones are linked with acne. For decades, doctors have taken a scorched-earth approach to acne, prescribing antibiotics that killed all forms of P. acnes, good or bad. As a result, up to 70% of these microbes are now resistant to conventional antibiotics. “Dermatologists, despite being 1% of the medical force, prescribe upward of 8% of antibiotics nationally annually,” says Naked Biome CEO and co-founder, Emma Taylor.

Naked Biome is developing a probiotic therapy for acne. Instead of killing P. acnes, the San Francisco-based firm would have patients flood their faces with live, healthy strains of the bacterium, ensuring the good bacteria will outcompete the bad, Taylor says.

Hopefully, this will treat and prevent acne and other skin diseases and reduce antibiotic use. Naked Biome is entering clinical trials to see if its approach is safe and effective.

Operating rooms increasingly rely on imaging technologies to help guide surgeries, both before and during a procedure. However, existing imaging agents work for only for a few minutes at a time, and they are usually only suitable for one kind of imaging. Multiple injections with imaging agents can increase the risk of kidney damage.

NanoVista has developed a way to combine multiple imaging agents in bubbles of fatty molecules each about 100 nanometers, or billionths of a meter, wide. The Toronto-based firm’s first product works with multiple imaging technologies, remains effective for up to two weeks and was successfully tested on 10 different human and animal tumor types. NanoVista’s bubbles are designed to be injected a week before surgery to help plan tumor removals. These will also visibly fluoresce during operations to help surgeons completely remove cancers, says NanoVista co-founder Jinzi Zheng. 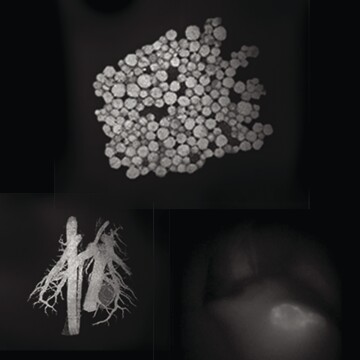 Nano-size bubbles (top) could be used in multiple imaging techniques to tag biological structures. A CT scan of a tumor amidst vascular and lung tissue (lower left) is an example. The markers are also long-lasting. They are still detectable in a tumor four days after injection (lower right).

Manufacturing lines rely on molds and dies to press out items. The downtime needed to change them for different products can cost manufacturers millions of dollars annually.

PinPress is developing a shape-shifting tool that can essentially serve as a thousand molds in one, significantly reducing changeover time. Their device consists of a block of pins, much like old pin-art desktop toys. A magnetic actuator individually moves pins up and down, and fluids fill the cavity under the pins to lock the block’s shape in place. An elastic rubber-like skin can be placed on these pins to smooth the surface and cover the space between the pins, says PinPress co-founder and CEO Asif Khan. Currently, the pins are roughly 7 millimeters wide, but the company hopes to shrink them to less than a millimeter to help make products with finer details, Khan says. The Port Hope, Ontario-based firm is now working on blister packages for pills and tablets.

8. Pumping Up a Failing Heart

One in five U.S. adults will develop heart failure, according to the American Heart Association. When drugs can no longer help patients with advanced heart failure, one recourse is left ventricular assist devices, which help circulate blood using mechanical pumps connected to the heart by tubes. However, implanting these bulky machines involves invasive, risky surgeries — 60% of patients experience severe complication, and 10% die soon after surgery.

Procyrion, a Houston-based company, is developing Aortix, a heart pump thinner than a pencil and less than 6.5 centimeters long. Aortix can be delivered into the aorta in a minimally invasive manner by inserting a catheter into a large artery near the surface of the groin.

The company has completed animal testing with prototypes and has moved on to human trials. It hopes to have Aortix ready for the market by 2020, says Procyrion CEO, Ben Hertzog.

9. An App to Engage Patients

Self Care Catalysts in Toronto has developed a mobile- and web-based app that patients can use to share relevant medical information, such as symptoms, medications and moods. They can also supply health data from their smartwatches and other wearable devices, and interact with their peers on the app’s social network for support.

The company plans to capture everything that happens to patients "outside the clinic in the real world in real time,” says the company’s founder and CEO Grace Castillo-Soyao. Much remains unknown about patients’ experiences and decisions between visits to doctors or researchers, she notes. Doctors and researchers can look at anonymized, aggregated data from patients to monitor, say, how well drugs or behavioral intervention programs are working, Castillo-Soyao explains.

Sunscreen can only help prevent skin cancer if it’s continually on the skin. Suncayr has developed a system that lets people know when to reapply.

The Kitchener, Ontario-based firm engineered a transparent ink that changes color when exposed to ultraviolet rays and incorporated it into stickers called SPOTs. People stick the SPOTs on their skin. When the SPOTs change color, it’s time to reapply. “You can use one SPOT all day long, even if you’re swimming or sweating” says Andrew Martinko, co-founder of Suncayr.

All the ingredients in each SPOT are already approved by the U.S. Food and Drug Administration and in use in cosmetic products. Martinko says that Suncayr will sell SPOTs in Australia in 2017 and launch in North America in 2018.

This article was produced for Johnson & Johnson Innovation by Scientific American Custom Media, a division separate from the magazine's board of editors