Preventing the Next Ebola Outbreak 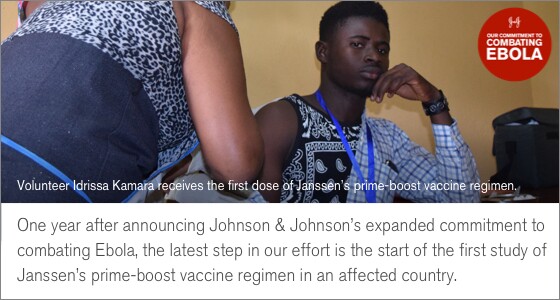 Early this January, just six weeks after Johnson & Johnson announced the acceleration of an Ebola vaccine program in response to the world’s deadliest Ebola outbreak, a team of us flew to Sierra Leone to begin exploring the possibility of conducting a clinical trial there.

That same week, Sierra Leone had recorded almost 250 cases of Ebola, and since March 2014, almost 10,000 cases and nearly 3,000 deaths. The devastation we saw on that first trip was horrifying.

Today, Ebola no longer terrorizes the people of Liberia, Guinea and Sierra Leone, other African countries or the rest of the world. And just this week, since March 2014, the World Health Organization reported no new cases.

This is the result of dedicated work and collaboration by health care workers, non-profit organizations, civil societies and foundations, local and foreign governments and the private sector who are now focused on the hard work of recovery and on the lessons learned for preparedness.

The threat of Ebola has abated for the moment, but we have another threat we must watch out for – complacency.

Without a treatment, licensed vaccine, or cure for Ebola, we risk once again a lack of preparedness for the next time an Ebola outbreak happens. For history shows us that it is only a matter of time. Ebola cases continue to pop up sporadically in the region and we know that, since its discovery, there have been 17 different Ebola outbreaks. Preparedness for future outbreaks is essential. And as part of that preparedness, we must test every promising prevention tool.

That’s why despite the fact that the most recent and devastating outbreak has been contained, we remain steadfast in our commitment to test, develop, and bring our vaccine to the finish line.

In the past year, our Janssen Pharmaceutical Companies have partnered with leading global research and non-governmental organizations to accelerate the development and deployment of a prime-boost vaccine regimen: conducting multiple Phase I and II studies in rapid succession across the U.S., Europe and Africa; scaling up production of 800,000 vaccine regimens; and securing support from global, national and local authorities.

Today, several Sierra Leonean volunteers received the first dose of the vaccine regimen and in two months they will receive a second dose. This vaccine is different from other vaccines currently being tested in other clinical trials in the region and a major step to there potentially being more than one available to prevent against future outbreaks. To make it all happen we have worked with our partners to build new health and vaccine storage facilities, train local health workers and promote understanding, acceptance and compliance with the vaccine regimen – all in record time.

While the Ebola epidemic no longer grabs global headlines, we cannot risk allowing Ebola to cause the human suffering that the world has witnessed in West Africa. And this is why, for our team and partners, we will continue to do what we can, as fast as we can, to prevent it from ever happening again.