Share
In honor of World TB Day, we take a look at the work being done in South Africa, Vietnam and India to stop tuberculosis in its tracks.
By Nanette VarianMarch 24, 2016
Today's Top Reads Close

More than two billion people—about a quarter of the world’s population—are infected with tuberculosis. TB is preventable, and curable, yet the disease kills 4,000 people each and every day.

March 24th is World TB Day and this year’s theme is “Unite to End TB.” It’s a fitting message for the Johnson & Johnson Family of Companies, which has been at the forefront of a number of groundbreaking research, treatment and outreach programs and partnerships aimed at eradicating the scourge.

In fact, the company’s efforts to address TB are part of an overall Global Public Health commitment to measurably improve the lives of individuals, families and communities. This includes working to help eliminate MDR-TB (multi drug-resistant) and XDR-TB (extensively drug-resistant), as well as simplifying treatment regimens, for patients worldwide.

In commemoration of World TB Day, here’s a look at the daily lives of three employees working to bring new hope to TB sufferers in Vietnam, South Africa and India. 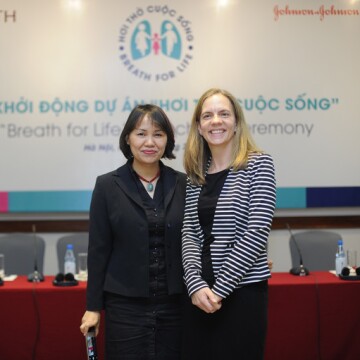 Binh at a Breath for Life event in Vietnam

“Public health has opened new horizons for me,” says Dr. Mai Thanh Binh, who studied economics in addition to attending medical school. The Hanoi native was the northern sales manager in Vietnam for Janssen-Cilag, one of the Janssen Pharmaceutical Companies of Johnson & Johnson, until 2014, when the company announced the formation of a new Public Health group in Vietnam—and Binh was asked to join the team.

“My boss said, ‘Binh, you are a medical doctor, you understand the health care system, and you’re good at communicating,’ ” she recalls. “You should move to Market Access-Public Health.”

And with that, Binh was tasked with overseeing “every activity related to public health, such as TB, HIV, hepatitis and emerging pandemic diseases,” she says. Breath for Life, an innovative program aimed at combatting pediatric TB, was one of the first projects that Binh helped coordinate from the ground up.

I am a mother of three, and I really don’t want another child to have to die of TB.

Some 1,200 new cases of TB are diagnosed among children in Vietnam each year. But the disease, which progresses more rapidly in kids, is also more difficult to detect in them. Research shows that as many as 90% of new childhood cases could be going undetected in Vietnam annually.

Breath for Life, says Binh, “was built to bridge the gaps of case detection and prevention in childhood TB.” The two-year pilot project, announced in February 2016 in partnership with the international health nonprofit PATH, will roll out this year in Nghe An, a high-burden province for TB.

In collaboration with the government’s National Tuberculosis Control Programme, Breath for Life will train healthcare workers in pediatric TB detection and management, and set up referral systems for treatment. The project will also focus on improving systems for recording and reporting TB in children, and suggest ways in which the model could be replicated in other provinces.

“Everything is new,” says Binh, who in her downtime enjoys reading the works of the ancient Chinese philosopher Lao-Tzu. “Public health is different from my job in sales. I can bring more opportunities and hope to the most vulnerable populations, so I feel very proud of my job. I am a mother of three, and I really don’t want another child to have to die of TB.”

One of the myths about TB in her country relates to which populations are affected, says Abeda Williams, Medical Affairs Director for Janssen Pharmaceutica South Africa. “You think that if you’re living in an urban area, you are not exposed,” she says. “You think because you aren’t poor you can’t get it.” 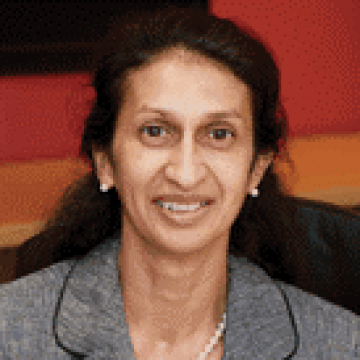 But Williams notes that there are doctors, police officers and nurses in South Africa who’ve had TB. “It is not limited or isolated,” she adds.

And according to Williams, too many people in the country don’t seek medical help until it’s very serious. “They think, ‘Oh, it’s just a cough. It will go away. Maybe it’s just a cold,’ ” she says.

So one of the initiatives Williams is most proud of spearheading is the “How Will I Know If I Have TB?” outreach program. “It’s a massive screening campaign in South Africa to help the government identify undiagnosed and untreated patients,” she explains. “A mobile unit goes out into the community to help explain such things as the symptoms of TB. We’ve screened more than 100,000 people.”

Compounding the problem in South Africa is the rise of multi-drug-resistant TB, which according to one analysis, could claim as many as 2.6 million lives annually by 2050 if left unchecked. South Africa, says Williams, has the third-highest rate of MDR-TB cases worldwide.

You think that if you’re living in an urban area, you are not exposed.

MDR-TB treatment includes a two-year daily cocktail of pills and a half-year of daily injections, “which isn’t easy,” notes Williams. “Imagine having to get an injection every day for six months. So we try to monitor these patients monthly.”

Her group has also launched a pilot program to provide infection-control kits and educational materials to extensively drug-resistant TB (XDR-TB) patients so that they may live safely within the community.

Williams, who grew up in a segregated area under apartheid, says it can take time to get projects reviewed that she’s eager to get going. So to help relieve stress, she enjoys gardening and exercise, especially running. “It’s not just physical fitness—it’s mental fitness,” she says with a laugh.

When asked what inspires her to do this work, Williams replies without missing a beat: “Because I can see the difference I can make for patients. That’s why I really enjoy what I’m doing.” 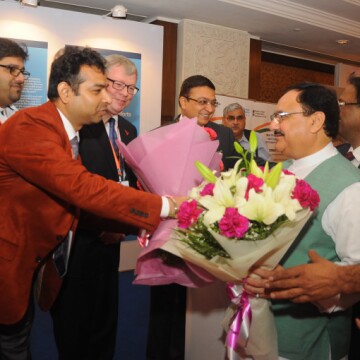 For 40 years, there had been “no new drug in the TB space,” says Anand Rishi, General Program Manager for Janssen India. And that spelled disaster in Rishi’s country, where the estimated number of new MDR-TB cases—which don’t respond well to traditional treatment—tops 70,000 each year.

That is until about two-and-a-half years ago, when Rishi began serving as Janssen’s “access lead” in India for a drug that was approved by the FDA for use in MDR-TB patients in the U.S. in 2012.

“India is the TB capital of the world,” Rishi says. “Every TB patient spreads the disease to approximately 15 individuals over a lifetime, so he creates 15 more patients if he doesn’t get treated on time.”

To help get patients in India access to the drug, Rishi and his team worked closely with the government to secure approval for the drug’s use in 2015, with the goal of distributing the medication—for free—to some 600 patients this year.

“That meant a transformation not just for us but for a lot of other countries,” Rishi says. “We are going to begin an access project for the drug in Pakistan next, and Nepal should be starting in the next few months.”

Every TB patient spreads the disease to approximately 15 individuals over a lifetime.

Back in 2013, when Rishi agreed to take on the project, he never expected the emotional pull this drug-access work would exert on him. “It was an emotional journey,” says Rishi. “You realize that your responsibility—your first responsibility—is to the patient.”

In particular, he recalls a young MDR-TB sufferer with diabetes who needed lung surgery. Since his prognosis was extremely poor, his doctor received permission to use the medication under India’s “compassionate use” program, which allows early access to drugs approved in other countries.

That young man was the first person to receive the drug in India, says Rishi, adding that he’s now fully recovered and a college kid “like any other” who enjoys hanging out with friends—who have no idea he once nearly died from TB.