May the Strip Be With You: 5 Questions for the Designer Behind the New Star Wars BAND-AID® Brand Adhesive Bandages

Obi-Wan Kenobi isn’t your only hope the next time you need protection: As The Last Jedi flies into theaters today, Johnson & Johnson has released bandages that pay homage to the film.
By Jessica HendersonDecember 13, 2017
Share
Share
Today's Top Reads Close

We spoke to the master of the bandages, Utah-based graphic designer Jim Killian (who admits he totally "geeked out" about the assignment) about the force behind the one-of-a-kind strips he created.

Was it intimidating to work with such beloved Star Wars characters?

Star Wars has been around forever and people love it so much, so I tried to do justice to these characters that everyone is so emotionally attached to. Just being able to say that I made these, that I’m a very minor part of this cultural juggernaut, is huge.

And I have two kids that are 3 and 6, so it’s awesome to work on something they get excited about too. 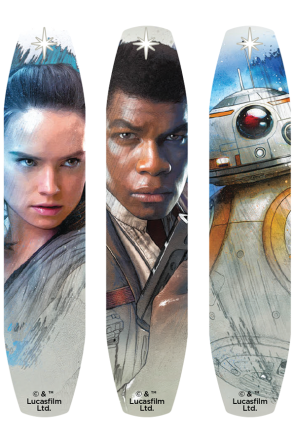 Lucasfilm and Disney are known for keeping the details of these films under wraps. How did you go about sourcing inspiration for your designs?

Even though I signed an NDA, and they kind of indicated which characters they wanted to see get a bandage, they really didn't tell me anything!

Around the World With Johnson & Johnson: 6 Unbelievable Places Company Products Have Been

I used their archives, where I could find out what a character looks like before other folks, but there weren’t any story or plot notes there. I asked questions about new characters, but didn’t get much information back.

Believe it or not, Google is a good friend, because somehow fan sites already seem to know everything.

Any chance those archives are at Skywalker Ranch?

I wish they’d sent me there! I was using digital archives—I logged on to a very secure website with lots of passwords—full of their creative stuff. It's overwhelming, there's so much to dig through.

This is the only time I've cheered for the Dark Side! During approval rounds, people didn't like the Dark Side because they were worried it might look too scary. Light versus dark is what the whole movie is about!

For these bandages, we looked for characters that would appeal to kids, and that had a clean design because of the small size of the strips. Then we created and proposed 10 to 20 different packs of 12 various bandage designs that got narrowed down to the final box.

What are some of the unexpected details people might not realize you have to take into account when designing a BAND-AID® Brand adhesive bandage?

All those tiny little perforated dots can make it difficult to print an overly complicated design, especially since the machines print millions of the strips at once at really high speeds.

J&J Fun Facts: 7 Things You May Not Know About BAND-AID® Brand Adhesive Bandages

Are you more drawn to the Light Side or the Dark Side?

This is the only time I've cheered for the Dark Side!

For this box, we did two sides: one with a black background that shows Captain Phasma and Stormtroopers. On the Light Side are the good guys: Rey, Poe and Finn. 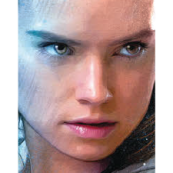