5 Things to Know About This Year's Flu Shot

Share
Is it too late to get one this year? Is there anyone who shouldn't get it? We answer these and other pressing questions about the vaccine so you can stay healthy this flu season.
By Camille Chatterjee, Staff Content Strategist, Global Content LabDecember 03, 2017
Today's Top Reads Close
H

ave you gotten your flu shot yet?

If you haven't, you’re not alone: Last flu season, less than 50% of people in the U.S. reported having been vaccinated by the end of November, according to the Centers for Disease Control and Prevention (CDC).

Even if you swear you never get the flu, getting vaccinated is not only crucial for the safety of those around you, but it may be more important for your own health than you realize.

“First, it would be really remarkable if you never got the flu in your life,” says Ted Kwaks, Ph.D.

Even if you don't have flu symptoms, you could be passing the illness on to populations who are at especially high risk of complications, including young children, older people, pregnant women and those with chronic conditions. For them, having the flu could lead to long-term health problems, hospitalization and even death.

“In the U.S. alone, tens of thousands of people die of influenza or related conditions each year,” notes Kwaks. "And a lot of people end up in the hospital because of it.”

For National Influenza Vaccination Week, we've rounded up five key things everyone should know about the flu shot—and why you should make a plan to get one if you haven’t already this season.

It’s not too late to get a flu shot in December.

While the CDC advises people to get a flu vaccine by the end of October, early December is still ahead of the typical peak of flu season, which occurs between December and February (it varies year to year).

“As long as the flu is still circulating in your community, it’s not too late," she says.

Anyone over the age of 6 months can get the vaccine.

Pregnant women pass on the shot’s benefits to their babies, protecting them from flu infection in utero and even several months after birth.

The flu vaccine is safe for adults, children and babies older than 6 months.

It is also safe and recommended for pregnant women, who are more prone to influenza than other adults due to changes in their heart, lung and immune function, per the CDC.

Bonus: They pass on the shot’s benefits to their babies, protecting them from flu infection in utero and even several months after birth.

The vaccine is even safe for people with egg allergies who were once told to skip the flu shot, since it generally contains egg protein. That said, be sure to discuss your allergy with your vaccine provider because some egg-allergic people should only get the shot under the supervision of a medical professional, Dr. Grohskopf says.

Flublok, the first 100% egg-free vaccine, is an even better option for these individuals, if it's available at their provider. Just note it is not approved for children under 18 years old.

There are two forms of the vaccine, which both work ...

There are several different types—or strains—of the influenza virus. And since it's impossible to predict with 100% certainty which of these strains will be circulating come flu season, vaccine makers must essentially make an educated guess about which to include in their product, based on a recommendation from the World Health Organization.

Healthy adults may receive one of two vaccine types: a trivalent version, which protects against three different strains of the influenza virus and has been around for many years, or a relatively new quadrivalent version, which is designed to protect against four virus strains but “hasn't had enough experience in the real world for us to know how much better it works than trivalent shots,” says Dr. Grohskopf.

Bottom line: Either type of vaccine is safe and effective.

“Don’t delay vaccination to try to get a specific product,” Dr. Grohskopf says. “Sometimes there are limited quantities of certain vaccine types, or they’re more prevalent in certain regions. We’re fortunate that there are so many different places you can get vaccines now—retail establishments, drugstores, employers. The important thing is to get vaccinated.”

... except the intranasal vaccine.

If you opt for an intranasal vaccine, just know it likely won’t be as effective as getting the injection.

Shot-haters rejoiced when an intranasal form of the flu vaccine—which is sprayed into the nose, rather than injected into the muscle—was first introduced in the early 2000s.

But this year, the intranasal flu vaccine is not recommended for use by the CDC. “For two recent flu seasons, it hasn’t worked very well against the forms of the influenza virus that were most prevalent in those years,” Dr. Grohskopf explains.

That said, the intranasal version is still approved by the U.S. Food and Drug Administration and may be available for use this year. So if you opt for one, just know it likely won’t be as effective as getting the injection.

A new vaccine in the works has the potential to be even more effective.

Since vaccines are created so far in advance of flu season each year, sometimes the virus mutates in an unforeseen direction by the time winter comes along, and the strains in the shot don't match the strains that are actually circulating.

An ideal solution to this would be to have one universal flu vaccine that would work every year, no matter which strains were most prevalent in a given season. It’s a potential option that doesn’t exist—yet.

Research Kwaks and his team are conducting could help change that.

“The upside of a universal flu vaccine is that it could likely protect against pandemics and flu viruses that haven’t even hit yet,” he says.

His team has designed molecules called mini-HA antigens containing parts of the flu virus that appear within a wide variety of viruses. Vaccinations containing these antigens would provide protection against many more strains than current vaccines do.

"It’s only a concept at this point," he says, "but so far, in preclinical models, it seems to show promise.”

A final version is about 10 years away, so until then, he strongly advocates for getting a vaccine that’s available now: “I think people underestimate how important it is.” 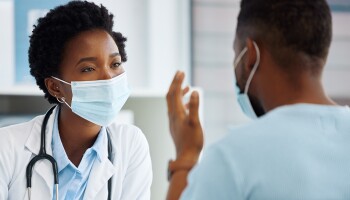