The Making of Tomorrow’s Super Communities: How the Lake Nona Life Project Could Save Your Life

Share
Clichés aside, this small town in America could have a big impact on your future—and you don’t even have to live there. Welcome to Lake Nona, the community that could hold the secrets to perfect health.
By J. BianchiOctober 05, 2016
Today's Top Reads Close

Smoking. Eating a diet high in cholesterol. Opting to be a couch potato over logging time at the gym.

You’d be hard-pressed to find someone today who doesn’t know that these unhealthy habits can lead to heart disease—the top cause of death in the U.S. But what if we told you that, just a few decades ago, even medical professionals didn’t know that behaviors like smoking were linked to cardiovascular disease?

It’s true. And we have one ambitious research project to thank for finally opening our collective eyes: the Framingham Heart Study, which ultimately helped scientists pinpoint the top risk factors for heart disease.

The landmark study was the brainchild of epidemiologist Thomas Dawber, M.D., who decided in 1948 to start tracking 5,209 men and women between the ages of 30 and 62 who lived in the town of Framingham, Massachusetts. The goal: identify health factors that might contribute to cardiovascular disease.

Initially, the project was just intended to run for 20 years, but it’s still going strong today. Over the past 68 years, top medical journals have published more than 1,200 articles based on its findings. In essence, the Framingham study has changed the face of heart health—and doctors the world over now use much of what was discovered during the study in clinical practice.

Twelve presidents and 36 Olympic Games later, we now know that an in-depth, long-term analysis of one community’s health outcomes can prove enormously valuable in revealing how certain behaviors can influence the onset of disease in a population over an extended period of time—and ultimately help scientists figure out how to better prevent and treat it.

But despite the Framingham Heart Study’s resounding success, no one has tried to mimic its design, likely because this type of longitudinal research can be costly and time-consuming.

That is, until now.

In early 2013, a team of researchers from Johnson & Johnson Health and Wellness Solutions (JJHWS) dreamed up an initiative called the Lake Nona Life Project. The multi-generational study, conducted in conjunction with the non-profit Lake Nona Institute, would track people who live or work in an 11-square-mile, 7,000-acre community in southeast Orlando called Lake Nona.

But rather than focus on just one condition, like heart disease, the scientists decided to look at multiple aspects of wellness, including things like sleep and exercise. And given that more than 10,000 people currently call the community home, and roughly 5,000 work there, the potential for great health discoveries is, well, great.

To learn more about how our fates could be forever changed by the Lake Nona Life Project, we tracked down researchers, doctors and, of course, residents taking part in the revolutionary study. What they have to say is sure to have a positive impact on us—and generations to come.

Thanks to its collection of world-class health facilities—the University of Central Florida College of Medicine, Nemours Children's Hospital and the Johnson & Johnson Human Performance Institute, just to name a few—Lake Nona is often referred to as “Medical City.” 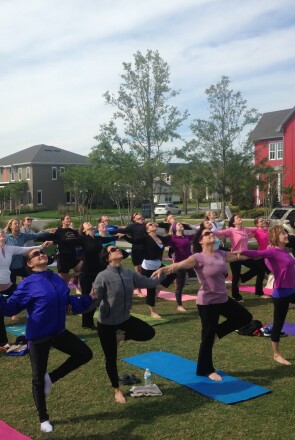 Free yoga classes are just one of the healthy perks afforded to Lake Nona residents.

With so many high-profile institutions clustered in one locale, the team at JJHWS believed that the town of Lake Nona could be an ideal place to launch a study revolving around one simple question: What could we learn about health and wellness from this community?

So together with the Lake Nona Institute, the team at JJHWS created a scientific advisory board made up of physicians, public health specialists and other researchers. Over the course of about two and a half years, they hashed out how the study would be executed. In May 2015, study coordinators began recruiting residents—and the Lake Nona Life Project was born.

Lake Nona, which Fortune magazine once named “the next great American city,” really is an ideal locale to conduct a study of this caliber. Not only is it one of the fastest-growing communities in the country—residents are projected to top 25,000 in the next 12 years—but its population is also notably diverse.

There’s also a huge emphasis on health and wellness in Lake Nona that’s evident from the moment you step foot on the community’s sprawling, well-manicured grounds, comprised of 44 miles of running and cycling trails and 10 swimming pools. Residents can take part in a bike-share program, join one of 10 fitness centers, and sign up for free outdoor yoga and tai chi classes on the weekends.

I became the poster boy for cardiovascular fitness. So when I heard about the Lake Nona Life Project, I thought: This is for me.

Weekly movie nights and musical events are designed to encourage neighbors to connect and spend time together. In fact, many homes in the community were designed with front porches for the same reason. “We believe that people who are connected socially are, in general, healthier people,” says Gloria Caulfield, Executive Director of the Lake Nona Institute. “People who are lonely and isolated tend to suffer more from depression, overall, and don’t live as long.”

If you’re a scientist, the appeal of such an über-healthy environment is pretty evident: It has the potential to provide a basic blueprint for helping others across the country—perhaps throughout the world—to achieve peak health.

“Lake Nona offers an opportunity to more deeply study important topics like well-being because the community is designed for it—there are many activities to evaluate,” says Shawn Mason

Resident Natalia Foote, 35, joined the study with her husband, Michael, 34, after a friend recommended they attend a community meeting about it. “When we learned about the goal of the study, we were blown away,” Foote says. “We thought: Of course we want to be a part of this. It just reinforced our decision to move to Lake Nona in the first place.”

What initially drew the Foote family—the couple has two boys, ages 6 and 4—to the area was its sense of community and togetherness. “You’re surrounded by individuals who have a like-mindedness about being active and have a healthy focus,” says Foote, adding that she hopes the research will show that living in an environment that promotes nutritious foods and physical activity will lead to healthier residents.

Indeed, the Foote family has become an especially active bunch since moving to Lake Nona: Michael recently finished a marathon, and Natalia is training for her second triathlon. As for the kids, Jacob plays golf at his elementary school, and Charlie wants to climb every tree that he sees.

All in all, Natalia can't think of a better place to call home. "I often pinch myself and go, ‘Wow, I live here,’ ” she says. “It does feel special.”

Donating Your Body, Mind and Time to Science

To take part in the study, you must live or work in Lake Nona (or reside with someone who works there), be over the age of 18, and communicate fluently in English. Participation is voluntary, but the goal is for 70% of eligible people within the community to join. 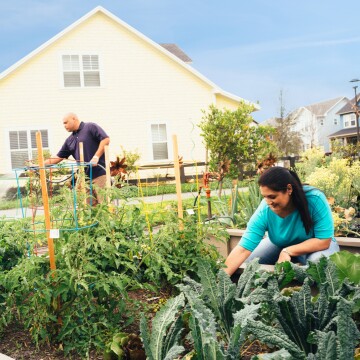 In addition to growing their own fresh fruits and veggies, residents have access to an on-site farmer's market.

As part of the study, all subjects get free access to the JJHWS Digital Health Coaching program, which helps participants create wellness goals and get motivated to achieve them. Study subjects also take a 20-minute survey every other year. “People don’t always make dramatic changes year over year,” explains Dr. Mason. “But every two years, you can start to see things shift.”

The survey has 12 sections and covers various aspects of health, including diet, exercise, oral care, smoking, allergies and sleep. Sample questions include things like: How many hours of sleep do you get per night? How often do you work out, and if you do, do you do so by yourself? Participants can also voluntarily share their medical records privately with study leaders.

To date, more than 1,500 residents have signed up, and of that pool, 700 have taken the survey. As time goes on and the sample size increases, scientists can begin to analyze the data of Life Project participants.

“I’m alive because of the Framingham study,” he says. After suffering a severe heart attack in 1990 and undergoing double-bypass surgery, doctors recommended that Greene eat more whole foods, amp up his activity levels, and meditate regularly—all heart-healthy strategies that came out of the landmark Framingham research. “I became the poster boy for cardiovascular fitness,” he explains. “So when I heard about the Lake Nona Life Project, I thought: This is for me.”

He and his wife Claudia love walking and biking on Lake Nona’s trails, and he has joined a team of people that knocks on doors in the community to encourage people to participate in the study. "I like to be forward-thinking, and I like to be part of what the future is bringing us," he says.

Of course, part of the beauty of the study is that its ultimate purpose is not yet clear. “What we’ll learn will unfold with the data,” says Jennifer Turgiss

To Turgiss’ point, researchers plan to narrow the study’s focus based on the data that starts to trickle in from the surveys. For instance, if they notice that many participants aren’t sleeping well, they may do a sub-study on insomnia and how it relates to, say, stress or certain lifestyle habits.

“We have a lot of questions in the survey around mental health, too, because we think that could be an interesting area of learning,” Turgiss adds.

Compared to their Framingham counterparts, Lake Nona researchers also have one added advantage: easy access to the kind of data-tracking technology that was the stuff of science fiction in 1948. “We can incorporate Fitbits, Jawbones and other types of trackers to measure exercise, sleep and more,” Dr. Mason explains. “We could even have people take flash quizzes on their phones.”

One person who could well be taking one of those quizzes someday is 39-year-old Arno Pfeffer. Like Greene, he was eager to add his name to the study’s registry.

Pfeffer, a hotel manager, relishes living amidst all the greenery that Lake Nona offers, regularly buys fresh produce from the on-site farmer’s market, and often attends free health events in the community. "I learned a great relaxation tip at one of them—a quick exercise I can do in my office chair that helps my neck and shoulders," he says.

Most of all, Pfeffer is excited about what his participation could mean for the future. "We have a great opportunity to make a difference,” he says, “and help not necessarily my generation, but generations to come.”