Share
Diagnostic tests. Clinical trials. A vaccine. For World Alzheimer's Month, we sat down with scientists at Janssen Research & Development to learn how their work has the potential to alter the future of how we detect and treat the disease.
By Jane BianchiNovember 13, 2017
Today's Top Reads Close
E

very 66 seconds. That's the alarming rate at which someone in the U.S. develops Alzheimer's disease. But there is reason to be hopeful.

Thanks to studies from the past couple of decades revealing that the disease can start showing up in the brain up to 20 years before symptoms appear, researchers are now focused on ways to better detect it in its early stages—enabling them to potentially slow or halt the illness before it becomes worse.

So what we used to think of as the "onset" of Alzheimer's—the point at which a person becomes cognitively impaired—might, in fact, be "late-stage" Alzheimer's.

Less than 5% of the time, the progressive disease is caused by a specific genetic mutation. Scientists aren't exactly sure what causes Alzheimer's in the other 95%, but there are two known abnormalities associated with the disease. One is the accumulation of beta-amyloid plaques, or clumps of protein that damage brain cells. The other thing doctors tend to see in the brains of Alzheimer's patients are "tangles," protein threads that get twisted inside brain cells, preventing the cells from getting proper nutrition.

And that's just the beginning of what researchers hope to uncover—work that now has support from Bill Gates, who just announced a $50 million investment in the Dementia Discovery Fund (DDF), which is focused on identifying new treatments for the disease. Janssen Pharmaceuticals, part of the Johnson & Johnson family of companies, is a founding collaborator and investor in the DDF.

For World Alzheimer's Month, we're looking at three cutting-edge techniques currently being studied at Janssen Research & Development—one is an investigational vaccine with the potential to help prevent the onset of the disease—that might someday help change that 66-second statistic.

Today, doctors can look for the disease in the brain early, at any age, by giving a patient a PET scan (a type of brain imaging) or a spinal tap. But the tests are expensive, not to mention somewhat invasive and time-consuming. So one big question facing doctors is: How do we figure out who, exactly, needs them?

"I Want to Revolutionize Healthcare": Meet the 26-Year-Old CEO of Start-Up IntuiTap

One theory on how to find out what's going on in the brain may be to look closely at the eye via retinal imaging. Scientists believe that when amyloid plaque accumulates in the brain, it also accumulates in the retina. And research has shown that this buildup can begin years before Alzheimer's symptoms set in.

A close-up view of amyloid plaque, which accumulates in the brain and may lead to Alzheimer's

Advanced retinal imaging is being developed to potentially scan your retina to detect whether amyloid plaque is present, and if so, how much. "It's early-stage technology," Narayan explains. "But we've done some testing with humans, and there is encouraging preliminary data that now needs to be replicated. We're working on a couple of big studies to do that."

We need to treat Alzheimer's like all other chronic diseases—before it gets to the end stage, so we have more time to treat people before they're impaired.

If this type of test proves successful, it's something that, down the line, an eye doctor might potentially be able to give you at a regular checkup within 15 minutes.

Another diagnostic tool under development is a memory test using a tablet or smartphone. When you develop Alzheimer's, certain types of memory are the first to go, such as the ability to recall words you've heard out loud.

Currently, a psychologist can administer this test face-to-face, but scientists at Janssen are developing a version of the test that can be administered by a program on a tablet or smartphone that would talk to a patient—similar to how digital voice assistants work.

The hope is to determine whether patients can get similar results taking the test at home, which could someday potentially help doctors better triage patients.

A Drug That Could Slow the Progression of the Disease

"We need to treat Alzheimer's like all other chronic diseases—before it gets to the end stage, so we have more time to treat people before they're impaired," says Gary Romano, M.D., Ph.D.

To that end, Romano is working on two clinical trials of a drug that could potentially slow the progression of Alzheimer's in patients who don't yet show any noticeable symptoms.

The first, the EARLY Trial, is currently enrolling a total of 1,650 patients worldwide who are over age 60, have a parent or sibling with Alzheimer's and who show diagnostic signs of the disease in their brains (abnormal levels of amyloid plaque) but no detectable symptoms. Researchers plan to follow these trial participants for four years.

The second, the DIAN Trial, is currently enrolling 140 patients globally who have a rare, dominantly inherited mutation in certain genes that causes early-onset Alzheimer's and who either have no or mild cognitive impairment. Study participants will be followed for at least four years. 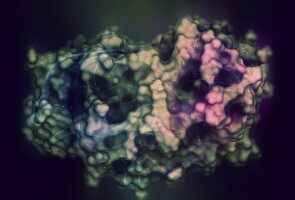 A BACE inhibitor, which may be able to block the production of amyloid plaque

The drug that's being tested in the clinical trials is called a BACE inhibitor. There's an enzyme that catalyzes the first step in the production of amyloid plaque, which builds up in the brain and is associated with Alzheimer's. This BACE inhibitor is being studied to see if it has the potential to block that enzyme, which could, hopefully, slow production of amyloid before it gets to an abnormal level and causes major cognitive impairment.

"So instead of studying patients whose brains are already full of amyloid, we are studying how to prevent amyloid from developing in the first place," Romano explains. "This has the potential to really make a difference."

Beyond amyloid, there's another protein your brain makes called tau. There's "normal" tau and there's "abnormal" tau, which is associated with Alzheimer's.

"The question is: When looking at treatments, how can you target the abnormal tau, but leave the normal tau unaffected?" says Husseini Manji, M.D.

Husseini Manji, M.D.,Global Therapeutic Head for Neuroscience at Janssen Research & Development, Global Therapeutic Head for Neuroscience, Janssen Research & Development. "Well, one scientific breakthrough we've discovered is that the abnormal form of tau seems to spread from one nerve cell to another. So if you can figure out how to target what has left a nerve cell (the abnormal tau), you can leave the normal tau unaffected inside the nerve cell."

We'd likely wait until people are first showing some tau in the brain, and then we'd try to nip it in the bud. If it's safe and efficacious, it could become a routine vaccine for Alzheimer's that everyone gets by, say, age 30.

The preventative treatment that Manji is describing—and that his team is researching—is a potential Alzheimer's vaccine, which would introduce a fragment of an abnormal tau protein into a patient's body to encourage the development of antibodies against abnormal tau proteins.

"It wouldn't be like a childhood vaccine [that's administered before the onset of disease]," Manji adds. "We'd likely wait until people are first showing some tau in the brain, and then we'd try to nip it in the bud. If it's safe and efficacious, it could become a routine vaccine for Alzheimer's that everyone gets by, say, age 30."

The vaccine that Manji's team is developing is in an early stage. "We're in the human testing phase, validating that the vaccine gives a good antibody response in people," he says. "The next step is to then show that it helps prevent the spread of tau, and the final step is to show that it also slows memory decline."

As Manji explains it, when it comes to Alzheimer's research, he believes that what makes Janssen a leader in the space is its willingness to attack the disease at a very early stage.

And he's looking forward to what the coming years will bring.

"I remain quite optimistic. The nature of biomedical research is that often it's in incremental advances. The hope is that the first things we're doing will have a lot of benefit, and that you can build on them and have an even greater benefit," he says. "The answer could be targeting a combination of amyloid and tau, or it could be a number of other combinations. But I do feel confident that things are on the right track."