154
Despite obstacles and setbacks, these researchers vowed to never give up working to develop a new treatment for non-small cell lung cancer. For Lung Cancer Awareness Month, they share their journey.
By Jessica BrownMay 21, 2021
Today's Top Reads Close

It's a sobering fact: More people in the United States die from lung cancer than any other type of cancer.

Lung cancer is often diagnosed at a late stage, after the disease has metastasized—in other words, spread to other parts of the body. At this advanced phase, therapies aren't considered to be a cure, and the goal is to extend patients' lives and quality of life as much as possible.

This is particularly true in the case of non-small cell lung cancer (NSCLC), which accounts for around 85% of lung cancer cases. There are several types of NSCLC, and patients typically have a poor prognosis: for NSCLC with epidermal growth factor receptor (EGFR) mutations, the five-year survival rate is less than 20%.

Initially, chemotherapy was the only treatment available. It provided short-lived anti-tumor activity and was significantly toxic. Over time, other types of treatments called tyrosine kinase inhibitors (TKIs) were found to improve patients' lives and quality of life, but tumors developed resistance to these TKIs and patients had few options left.

It's patients like these that spurred researchers at the Janssen Pharmaceutical Companies of Johnson & Johnson nearly 10 years ago to try and find an effective drug for EGFR mutant NSCLC. The team elected for a novel approach: a bispecific antibody, which is a recombinant protein that can bind to two different antigens (substances that provoke an immune response in the body) that would target the disease.

It wasn't an easy road—studies were delayed, the science was complex and the COVID-19 pandemic brought in-person work to a grinding halt. But now that the treatment has been approved by the U.S. Food and Drug Administration (FDA), the team can proudly say their work and commitment have paid off.

“This is an exceptionally talented and dedicated team of drug developers," says Amy Roshak, Vice President, Development and Oncology Portfolio and Lung Cancer Compound Development Team Leader at Janssen Research & Development, LLC. "Their drive and commitment were endless. It’s really a privilege to work beside this team every day."

We caught up with four scientists who were integral to the development of a treatment for NSCLC to learn exactly what it took. 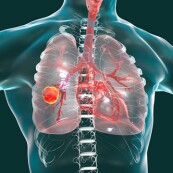