A new drug is giving new hope to sufferers of this form of leukemia. Sen Zhuang, M.D., Ph.D., explains the science behind it—and why he thinks cancer researchers have a lot in common with Steve Jobs.
By Molly TriffinOctober 13, 2016
Share
Share
Today's Top Reads Close
I

t’s perhaps the most devastating moment of a person’s life: hearing your doctor say, “You have cancer.”

And it’s an all too common one: According to the American Cancer Society, nearly 14.5 million people in the U.S. today have a history of cancer, with 42% of men and 38% of women receiving a diagnosis in their lifetime.

Now imagine a very different scenario: Your M.D. informs you that you have the C word—only it’s not a death sentence. Rather, it’s a controllable condition that you can work with your doctor to manage…and maybe even eradicate.

This may sound like science fiction, but Sen Zhuang, M.D., Ph.D., Vice President of Oncology Clinical Research at Johnson & Johnson, insists it’s not far-fetched. “I think it is inevitable that we will be able to transform cancer in the next 15 to 20 years,” he says.

In pursuit of that dream, Dr. Zhuang and his team have been at the forefront of incubating a new generation of cancer drugs. One of their latest developments, Imbruvica®, represents an impressive step forward.

The U.S. Food and Drug Administration (FDA) approved Imbruvica, jointly developed by Janssen and strategic partner Pharmacyclics, an AbbVie Company, in 2014 to treat patients in the most advanced stages of chronic lymphocytic leukemia (CLL)—the most common type of leukemia in the U.S.

This year, the FDA gave the go-ahead for the drug to be used as a first-line treatment for CLL, so individuals who have been newly diagnosed can now use the medication.

We sat down with Dr. Zhuang to talk about the science behind Imbruvica—and how it’s already improving the lives of many people worldwide.

Imbruvica helps treat chronic lymphocytic leukemia. Can you tell us more about this form of cancer? 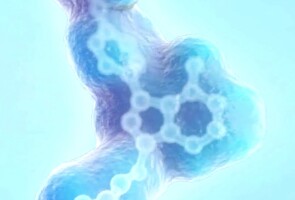 A look at Imbruvica under the microscope

Dr. Sen Zhuang: Chronic lymphocytic leukemia (CLL) is a type of blood cancer. Around 15,000 patients are newly diagnosed with CLL in the U.S. every year, and close to 100,000 people in the country have it.

It’s basically the name for an uncontrollable growth of certain white blood cells called lymphocytes that, over time, can destroy the body’s ability to produce normal red blood cells, white cells and platelets.

Red cells carry oxygen, and if there are too few of them or they aren’t working properly, the result can be anemia and constant fatigue. Normal white blood cells fight infection, so people with CLL have severely depressed immune systems. Finally, inhibiting the creation of platelets can prevent blood from clotting.

The average lifespan for CLL patients, from the time of diagnosis, is five to seven years. Unfortunately, with this disease, those years are often filled with struggle. As CLL progresses, it can become more serious and difficult to control. Many people end up dying from an infection.

How have patients historically been treated for CLL, and how is Imbruvica as a treatment different?

Historically, people receive chemotherapy. While chemotherapy generally works by attacking cancer cells, it can also affect other non-cancerous cells that grow quickly, such as those in the digestive tract.

Imbruvica is a pill that’s taken once a day (patients take three to four capsules at a time) that uses a different approach to attack cancer cells: It blocks an enzyme in white blood cells called Bruton’s tyrosine kinase (BTK), which drives the growth of CLL tumor cells. So by blocking BTK, Imbruvica causes the cancer cells to die.

In March, the FDA approved Imbruvica for use as a first-line therapy for CLL. Why is this so significant?

In the past, Imbruvica was only approved for people who had relapsed after trying other therapies. First-line treatment approval means that Imbruvica can now be used to treat people who have been newly diagnosed with CLL.

Getting Imbruvica approved as a first-line indication is a step toward the goal of helping to manage this illness in a different way, but we need to continue to do research so we can understand even more about how it can be used to treat this disease.

What have you observed in newly-diagnosed patients taking the drug?

When we look at the results of oncology trials, we perform a calculation called the hazard ratio, which assesses how a given drug reduces the risks of the cancer worsening, or death. When we received the hazard ratio results for Imbruvica patients who were newly diagnosed with CLL, we realized that it reduced these risks by more than half.

What inspires you to do this work?

After getting my medical degree and a Ph.D. in pharmacology, I was treating cancer patients when I became fascinated by the concept and process of developing a chemical or biologic agent that could help patients. So 12 years ago, I joined Johnson & Johnson to help develop drugs for cancer patients.

I’m not particularly good at anything else—I am not athletic, I don’t dance, and I don’t sing. This is what I love to do, and I am incredibly fortunate to do something that actually impacts life and death.

Each year, we invite a few patients to talk to our team. It is always the best moment for me. At times, I’ve been brought to tears after hearing that, after treatment, some patients were able to attend their kid's wedding or see their grandchildren—things that might not have been possible without this drug.

I’m also blessed to be working during a time when science and medicine are advanced enough that we can enable real progress. With CLL, for example, our ultimate aspiration is to transform it into a manageable condition that won’t substantially shorten life expectancy, much like high blood pressure or diabetes.

Steve Jobs had been trying to make an iPhone since the 1990s, but he didn’t have the technology to do it until the early 2000s. In the ’80s and ’90s, we wanted to develop transformational drugs for cancer, but we weren’t there.

Today, the science and technology are mature enough. We are there. And I’m going to be a big piece of it.