Can Artificial Intelligence Change How We Discover Drugs?

Janssen Research & Development, part of the Johnson & Johnson family of companies, has been at the forefront of treatment innovation for decades.

In fact, Dr. Paul Janssen, the Belgian physician who founded his eponymous company in 1953, discovered and developed dozens of lifesaving medications throughout his career.

Is It Ever OK to Take Expired Medication?

Traditionally, the process of discovering new pharmaceuticals takes years, due to the vast amount of data scientists must comb through to first identify the chemical compounds that are most likely to help treat a targeted disease—before they can even begin testing their effectiveness.

How AI Is Reinventing Drug Discovery

In a typical drug discovery experiment, cells representing a specific disease, such as lung cancer, are exposed to a variety of compounds, and a microscopy snapshot is taken of each reaction that follows.

There’s so much unmet need out there. Our algorithms can help us better mine our information to find better treatments faster.

One such experiment might generate half a million snapshots. Scientists commonly use AI to help sort through them, with the goal of finding a compound that could create the desired reaction for the disease they are studying.

However, there hasn't been a way to use the data gathered from those snapshots to inform later experiments for other diseases. Realizing how valuable it would be to recycle these learnings, Janssen researchers teamed up with academic partners from leading European universities to develop computer algorithms that scientists can now use to predict how other types of cells will likely react to the same compounds, giving them a leg up when starting a new study.

"We no longer have to start from scratch every time," explains Hugo Ceulemans

In fact, Ceulemans and his team found this AI method to be up to 250 times more efficient than the traditional method of drug discovery.

“There’s so much unmet need out there when it comes to medications,” Ceulemans says. “Our algorithms can help us better mine our information to find better treatments faster.” 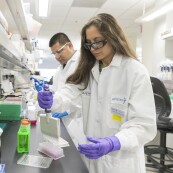