Share
When Janssen Pharmaceuticals merged with Johnson & Johnson in the early 1960s, a fruitful collaboration that continues to this day was born. Learn about the man who coined over 100 patents and developed dozens of life-changing medications.
By Elizabeth MarglinFebruary 22, 2017
Today's Top Reads Close

Putting people first is at the heart of Johnson & Johnson's company Credo. And that wouldn't be possible if not for the remarkable people who have trailblazed at the company since its founding in 1886.

In the latest installment of our "Employee Blast from the Past" series, we're putting the spotlight on Paul Janssen, without whom the Janssen Pharmaceutical Companies of Johnson & Johnson—and the groundbreaking work that comes out of their labs—wouldn't exist.

Why He’s So Legendary ...
Janssen, the son of a doctor, was born in Belgium in 1926. And although his father's vocation no doubt inspired his own passion for medicine, he was driven toward research after the loss of his 4-year-old sister to tuberculous meningitis. Despite modest financial means, he boldly founded his own independent research lab at the age of 27.

Early on, Janssen recognized the relationship between a compound's chemical structure and its action as a medicine and, in turn, synthesized many revolutionary drug compounds, including a breakthrough treatment for psychotic disorders. To further grow his lab’s potential, Janssen decided to merge his company with Johnson & Johnson, a move that was finalized in February 1962.

The rest, as they say, is history. 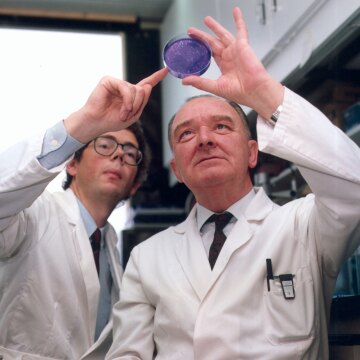 Johnson & Johnson’s resources dovetailed perfectly with the pace of Janssen’s research enterprise, which at the time of Janssen's passing in 2003, had grown to 34 foreign affiliates and a workforce of 16,000—and an impressive portfolio of noteworthy medications, including Imodium®, a potentially lifesaving treatment for diarrhea.

As Janssen made the rounds of his research labs, he was known for relentlessly asking: “What’s new?” So it's only fitting that, after his death, the company made his dream discovery: the first new treatment for tuberculosis in more than 40 years.

What Most People Don't Know ...
After setting up the first western pharmaceutical company in China, Janssen became involved in the fate of one of their national treasures: the historic Xian Terracotta Army, whose façades were being destroyed by mold.

Janssen helped protect and preserve the statues by using antifungal medicine from his lab—and the Janssen Pharmaceutical Companies of Johnson & Johnson continues to aid in the preservation of these priceless artifacts.