Share
The company has a legacy of supporting members of the armed forces. This year, it's expanding its military leave benefits for employees like Chris Serafin, who is proof of how generous military policies can make a world of difference for those who serve.
By Johnson & JohnsonApril 27, 2017
Today's Top Reads Close

Johnson & Johnson has a long and proud history of supporting its military service members, which dates as far back as the Spanish-American War in 1898, when the company held positions for employees and paid their salary while they served.

Today Johnson & Johnson continues to show its support by offering employee members of the armed forces generous benefits such as paid time off after military leave to help employees acclimate to life back home.

And this month Johnson & Johnson is proud to announce that it's expanding its U.S. military leave policy to pay service members their full salary, in addition to what the military pays, while deployed.

“We are continuously looking for ways to support our employees across all the dimensions of their lives, and our heritage includes a special emphasis on our military employees that continues through today,” says Peter Fasolo

He will be recalled to active duty again, so on the cusp of his redeployment, we asked him to reflect on how the company's military policies have helped both him and his family.

"In June of 2014, I was recalled to active duty as an Operations Officer for the Defense Logistics Agency in Afghanistan. Although I always knew this was a possibility—I’m in the U.S. Navy Reserve, and I’d served my country in active duty before—nothing can quite prepare you for getting deployed.

One day I was sitting at my desk at Janssen, and the next I was getting ready for combat.

In addition to being briefed on everything I’d face in Afghanistan, I also had to figure out who was going to take care of things around the house while I was gone, and help with hockey game carpools.

It’s incredibly daunting to know that you’re going to miss out on these simple parts of family life when you’re gone for nearly a year. 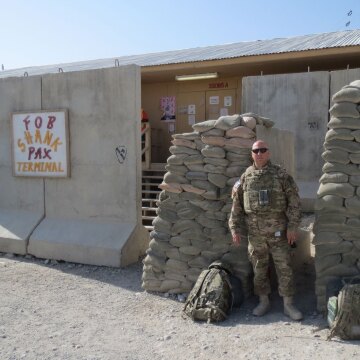 Serafin in Afghanistan in 2014

Of course, there was also work to wrap up—and the big job of mentally preparing for what was to come. About a month later, I was on the ground in 120-degree heat at a forward operating base in Afghanistan, where I was in charge of 350 military, civilian and joint contractors.

It’s kind of like drinking from a fire hose—you have to get up to speed quickly because people’s lives are at stake.

For the next nine months, I was constantly 'on.' The threat of an attack was always imminent, so I rarely had a restful night of sleep.

But although this was hard for me, it was even harder on my family.

I’ll never forget video messaging with them on Thanksgiving. In the middle of our conversation, we started taking incoming fire and I had to go abruptly. I stayed in a bunker for the next couple of hours, and my wife and kids had no idea if I was OK or not.

When I returned home in March of 2015, I was so grateful to be back—but the transition was a tough one. My assignment had been the most challenging I’d ever faced. Plus, I missed so much, including my 20th wedding anniversary and my daughter’s 16th birthday.

When I’m away, my family’s expenses go up because I’m not there to fix things around the house or cut the grass. Now I won’t have to worry that my wife and kids aren't being taken care of when I’m deployed.

It’s a lot harder to acclimate to life back home than one might imagine. When your family is used to operating without you, it takes some time to rebuild those relationships.

Not only was Johnson & Johnson understanding of this, but it was also incredibly accommodating by enabling me to take three weeks’ paid leave to decompress and reconnect with my family. It’s a benefit that’s offered through the company’s extended veterans and military leave policy.

My first week back at the office, the Chairman and CEO, Alex Gorsky, who also happens to be a fellow veteran, scheduled a meeting with me in his office. Here was the busiest man within the corporation making time to welcome me home and ask how I was doing.

I still feel so grateful thinking about that kindness.

I will be deploying again, and knowing that I’ll have time to acclimate when I come back takes a lot of worry off my plate. The last thing you want to stress about while you’re deployed is whether or not your management team at work is going to support you when you return, or if you’ll be able to have time to reconnect with your family.

And this time, I’ll be able to take advantage of a new Johnson & Johnson policy that pays employees 100% of their company salary, in addition to what they receive from the military, while on leave.

What people don’t realize is that when I’m away, my family’s expenses go up because I’m not there to fix things around the house or cut the grass. Now I won’t have to worry that my wife and kids aren't being taken care of when I’m deployed. For my family, this benefit is just above and beyond.

People talk about the Johnson & Johnson companies as a family. Well, I have to say that it feels true to me.

I’m proud to say that I work at a company that truly honors people who serve their country." 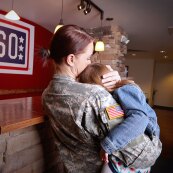