How Johnson & Johnson is Working to Create a Healthier Planet

41
For World Health Day, learn about the rapid progress the company is making toward its commitment to creating a cleaner, safer environment around the globe.
By Kimberly GoadNovember 30, 2021
Today's Top Reads Close

Wonder how much progress Johnson & Johnson is making toward its ambitious goals to help protect the health of our planet?

In fact, the company has made considerable strides in transitioning to renewable electricity and is more than half of the way toward meeting the goal of sourcing 100% of electricity needs at its facilities around the world from renewable sources by 2025.

But what does that mean exactly?

The benefit: Generating electricity from low-carbon energy sources decreases emissions of harmful gases, according to the Harvard T.H. Chan School of Public Health, and helps to mitigate climate change, which the World Health Organization recently called the single biggest threat to the health of humanity.

This is all part of how Johnson & Johnson is accelerating its longstanding commitment to help improve the health of our planet through three ambitious goals it plans to meet in the areas of renewable electricity, carbon neutrality for its operations and value chain emissions reductions. 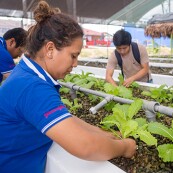 21 Health for Humanity Goals for 2025
Learn more about the full list of global citizenship and sustainability goals Johnson & Johnson has set.
Read them here