Share
BabyCenter® just released its annual ranking of top baby names for 2017—along with top naming trends among new parents. See why monikers like Sky, River, Cloud and Blaze are all the rage.
By Kaitlin AhernDecember 05, 2017
Today's Top Reads Close

The results are in: BabyCenter® has announced its hotly anticipated Top 100 Baby Names of 2017, culled from more than 500,000 little ones born in 2017 to parents registered on BabyCenter's website.

The experts at BabyCenter, part of the Johnson & Johnson family of companies, report that Sophia and Jackson took the top spots on the list for girls and boys, respectively.

Each year, BabyCenter's trend trackers also look at notable patterns in rising-star names. In 2017, those pilfered from pop culture (think LeBron, as in LeBron James of the NBA’s Cleveland Cavaliers, and Moana, the star of Disney’s animated hit) were popular—along with monikers that pay homage to the earth.

"Young parents have deep respect and concern for the environment,” says Linda Murray

Check out these 10 earthy names on the rise.

Both sexes are responsible for this name's increasing popularity over the years. In 2017, it climbed 26% on the girls’ list, where it has enjoyed a steady ascent since 2008. And on the boys’ side, the name rose a respectable 6%.

Celebrities have likely played a part: Singer Kelly Clarkson hopped on the trend in 2014 by naming her daughter River Rose, and celebrity chef Jamie Oliver dubbed his son River Rocket in 2016.

Famous Forests include Oscar-winner Forest Whitaker and, of course, the title character in the classic movie Forrest Gump. This year, the German-origin name is up 26% for boys.

This girl’s name shot up 32% this year in the U.S., following an upward trend that started in the early 1990s. And it's just as popular in Australia, Canada and the U.K.

The willow tree, which has appeared in many works of literature, is often associated with magical or healing powers.

Fans of the X-Men are no strangers to this strong girl’s name, which spiked 44% this year. And given how many epic hurricanes and tropical storms occurred in 2017, it’s no wonder weather was on a lot of new parents’ minds.

The whimsical Sky (sometimes spelled Skye, like the Scottish Isle of Skye) rose 20% in popularity for girls in 2017.

A rising star in 2016, when it climbed an impressive 76% in popularity, Cloud gained another 23% in the boys’ category this year. While Cloud could easily be grouped with Sky as a playful, dreamy name, its prevalence can probably be attributed to tech-savvy parents in Silicon Valley.

While the fiery moniker Ember has tended to be a more popular choice for girls, boys are starting to catch up, with a 47% uptick in popularity in 2017.

Keeping with the fiery theme, Blaze, or Blaise, is a hot unisex name that rose 19% for boys in 2017. In 2014, actress Kate Winslet went the double nature-name route and named her son Bear Blaze.

Up a surprising 88% for boys and 25% for girls, Hazel, which takes its name from the flowering shrub, also crosses over into the rising trend of color-inspired names. While less primary than Blue or Red—both of which rose in popularity for boys this year—Hazel has a more classic feel.

Although it's not as popular as sister name Violet, the purple plant-inspired Lavender is a strong contender among the color-nature names, rising 27% for girls this year. 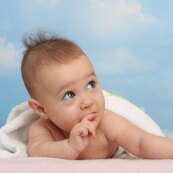