The Big Baby Trend of 2018: Giving Your Little One a Zen-Inspired Name

Share
BabyCenter® just released its top baby names for 2018—along with some interesting insights into why moms and dads are increasingly opting for monikers like Dream, Ocean and Peace.
By Kaitlin AhernDecember 03, 2018
Today's Top Reads Close

Chances are you know a baby named Jackson or Sophia ... but what about Dream and Sky?

BabyCenter®, part of the Johnson & Johnson family of companies, releases a much-anticipated annual list of the most popular names for newborn boys and girls, based on info culled each year from parents who registered on its website. Not surprisingly, Jackson (for the sixth year in a row) and Sophia (for the ninth year running) topped the lists in 2018, but an interesting new trend also emerged in the data—names that summon a sense of calm and serenity.

“The stress of our go-go-go, always-on world has parents turning to Eastern spiritual practices, like meditation and yoga, and re-centering their perspective on what matters most,” explains Linda Murray

That quest for re-centering seems to be translating to how new parents name their little ones, too—like these eight tranquility-invoking choices that are climbing the ranks.

The biggest mover and shaker this year is Peace, which rose a whopping 66% in popularity for girls, continuing an upward trend that started two years ago and isn’t showing signs of slowing down.

Also popular? Names from other languages that invoke a similar meaning, such as Irina (Russian), Noe (Spanish) and Frida (German).

The next up-and-comer is Dream, which saw a 42% increase in popularity for girls this year. Parents partial to this name may be channeling celebrities who've chosen this creative name for their kids.

Although generally associated with girls, Sky is becoming an increasingly popular pick for boys—it climbed 38% on the boys' list in 2018.

Another new favorite choice for boys is Ocean, which saw a 31% leap in popularity. According to Murray, names like Ocean are popular with millennial and Gen Z moms and dads who tend to be inspired by the things they love.

"In the past, we'd look to the Bible or royalty for name inspiration,” she explains. “Today's parents turn to other sources. We've had two decades plus of anything-goes 'unique' names. It's not like the days when every other baby was named Jessica, Jason or Jennifer."

Among the more whimsical names on the list of 2018 trendsetters is Rainbow, which climbed by 26% for girls.

According to the folks at BabyCenter, parents considering Rainbow may also like the name Aurora because of its connection to the equally colorful and atmospheric aurora borealis—the northern lights.

The musically minded name Harmony rose 15% in the girls’ category. The moniker has Greek roots and translates as “a beautiful blending.”

BabyCenter data shows that parents who pick this name are apt to choose such names as Melody, Serenity and Aria for siblings.

On the boys’ side, the name Sage saw a 15% boost in popularity. The word comes from the Latin for “wise,” but it also reflects another budding trend—naming children after favorite foods, such as the herb sage.

The perennially popular baby girl name Hope, which invokes "trust" or "faith," climbed 10% in the rankings this year. Although it's not as surprising a selection as Peace or Rainbow, Hope has an enduring quality that appeals to many new parents. 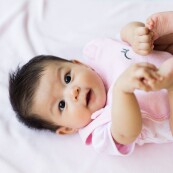 Can’t Find the Right Name? There’s an App for That!
Check out Baby Names by BabyCenter, which can help you discover new names, read up on meanings and origins, and even create a match list with your partner.
Download the app