The following ad will be appearing in major print and online news outlets starting December 17. 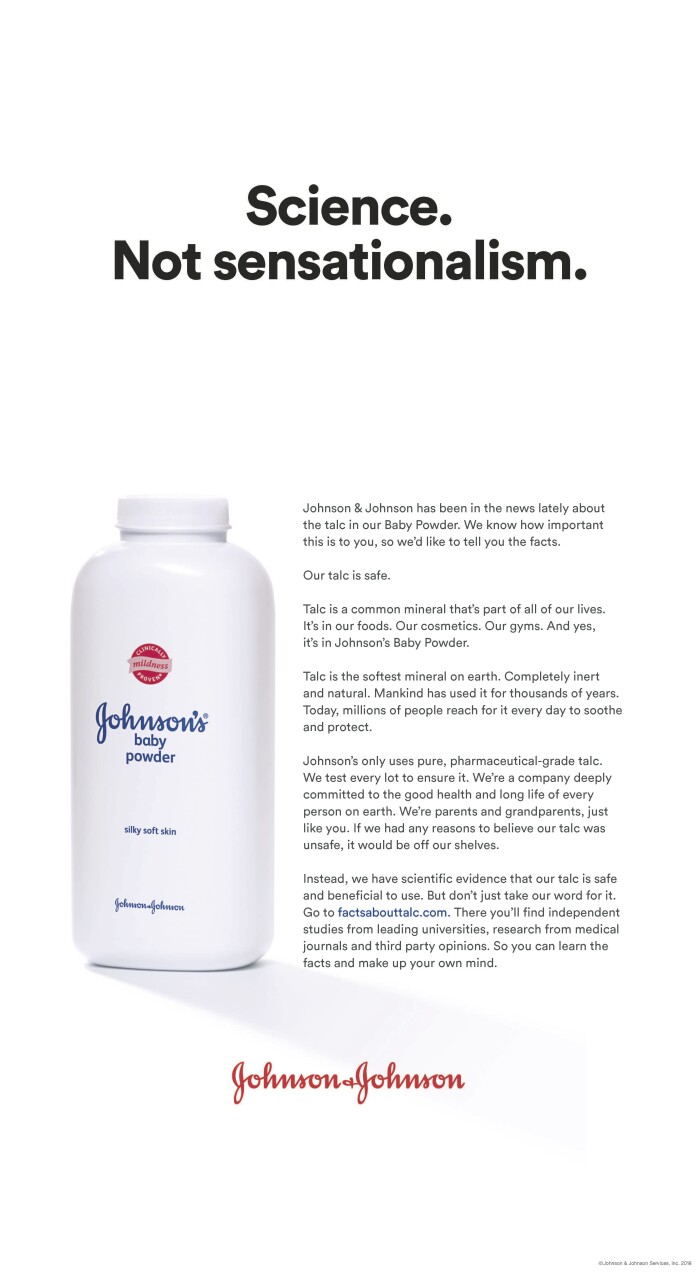 THE FACTS ABOUT THE DECEMBER 14, 2018 REUTERS ARTICLE

On Friday, December 14, 2018, Reuters published a story about Johnson & Johnson (J&J) baby powder that misrepresented J&J, our product, our actions, and the science about talc. Reuters misled its readers by printing inaccurate statements, withholding crucial information that otherwise undermines its thesis. Reuters published this story even though it was advised that it had the facts wrong.

Prior to publication, Reuters was supplied with substantial amounts of information that demonstrated the following that was ultimately omitted from the final article:

The information Reuters relied upon has been publicly available for years. It is unfortunate that while Reuters was provided with many of these detailed facts, they elected not to report them.

Below are the facts. More can be found at www.factsabouttalc.com.

I. Reuters’s story ignored the overwhelming science showing that talc does not cause cancer.

Reuters declined to report on the critical, dispositive science conducted by independent, leading health researchers that examined the carcinogenic effects of cosmetic talc products and concluded that talc is safe and does not cause ovarian cancer or mesothelioma.

The Nurses’ Health Study
The study followed over 78,000 women for 24 years (over 31,000 used talc). The study showed no overall increase in the risk of ovarian cancer.

The Women’s Health Initiative Study
The study followed over 61,000 women for 12 years (over 32,000 used talc). The study showed no overall increase in the risk of ovarian cancer.

The Sister Study
The study followed over 41,000 women for 6 years (over 5,500 used talc). The study showed no overall increase in the risk of ovarian cancer.

II. Reuters misinformed its readers about the facts showing J&J talc does not contain asbestos.

A. Although Reuters received dispositive information showing that today’s talc – mined in China for the last 15 years – does not contain asbestos. Reuters chose not to inform its readers of this fact.

B. For decades, independent tests of thousands of samples of our talc mines and processed talc by the world’s leading labs, regulators, and most prominent universities have found that our talc does not contain asbestos. Nevertheless, Reuters failed to disclose to its readers the independent institutions, laboratories, and universities that tested J&J’s cosmetic talc and concluded it did not contain asbestos.


This information was supplied to Reuters and they omitted it from their story.

Yet, although Reuters was informed of the following information, it elected not to disclose it:

C. Reuters acknowledges that the minerals which can in rare instances form to create asbestos can also form to create what Reuters calls “unremarkable” rocks which are not asbestos or “non-asbestiform.” This is like the difference between graphite and diamonds. Both are made of the same element (carbon), but they have very different properties; you can’t cut glass with graphite. Yet Reuters proceeds to treat these “unremarkable” rocks like asbestos. There is no scientific evidence that finding infinitesimal amounts of non-asbestiform minerals, which are “ubiquitous in the earth’s crust” according to the United States Geological Survey, means you find asbestos, which is rare. It neglected to tell its readers that there is no evidence that exposure to minute amounts of non-asbestiform minerals has carcinogenic effects.


D. Reuters failed to explain the meaning of background levels of asbestos.

E. Reuters erroneously reported there were “asbestos fibers in samples taken from the Vermont operation” in the 1980s. But it actually cited five test results that were indeed industrial talc samples from a California mine (Red Hill)—not Vermont—that was never used for cosmetic purposes.

F. Reuters misleadingly reported that X-ray scanning is the primary method that J&J used and that J&J only periodically tested its talc with transmission electron microscopy (TEM). In fact, since the 1970s, J&J has had in place a rigorous program of routine testing that requires that it or its supplier take hourly samples of its cosmetic talc production and test composites of those samples using X-ray Diffraction (XRD), Polarized Light Microscopy (PLM), and TEM. Indeed, J&J had tested on a regular basis both the source talc and composites of its samples with TEM. When performing these tests, J&J always used the state-of-the-art methods and technology for testing talc. This testing concluded that there was no asbestos in J&J’s cosmetic talc.

G. Reuters then criticizes J&J’s TEM testing because it only tested “a tiny fraction of what was sold.” Reuters completely dismisses the scientific validity of composite sampling. That is why when you go for a blood test, your doctor doesn’t remove all of your blood to test it, just a sample.

Even though J&J’s outside experts tested samples of talc with TEM, it ensured that these samples were representative of its total supply by combining hourly samples taken during each shift and then randomly testing those composites by TEM.

Reuters was apprised of these facts.

H. Reuters Gives A One-Sided View Of The Testing Conducted During Litigation.

The actual evidence shows that the sample she tested was most likely not J&J’s talc, and further, that she refused to allow J&J to run its own tests on the sample.

I. Against the independent tests of thousands of samples using state of the art methods, the articles point to a handful of outlier results that were either retracted, proven false by subsequent testing, or shown to be unreliable. This issue is not open to dispute. The science has been clear that our talc does not and did not contain asbestos.

J. In the 1970s, J&J experienced a similar event of false information in the media, when reports surfaced, based on preliminary and erroneous test results, that J&J’s talc was found to contain asbestos. Testing after those inaccurate reports confirmed, yet again, that our talc does not contain asbestos.

III. Reuters has received information showing that J&J has shared any information sought by global regulators, including the FDA, and that the company has been transparent about it.

A. J&J has consistently provided the FDA access to the company’s processed talc and independent labs’ testing results. Not only did J&J not hide anything, it has provided substantial documentation of test records and methodologies to help inform the FDA on these matters.

This information was supplied to Reuters and they chose not to report it.

B. Reuters reported that J&J withheld information from the FDA without noting that J&J provided extensive testing information to the FDA, disclosing many of the issues Reuters claims that J&J hid, even though disclosure was not legally required. For example:


C. Reuters reports that J&J pressured the FDA to allow it to use a testing methodology that would only detect 1% of asbestos. This is misleading.

D. Reuters also failed to mention that J&J was just one source of information to the FDA.

E. Reuters falsely reported that many of the documents “were shielded from public view by court orders that allowed J&J to turn over thousands of documents it designated as confidential,” and claimed that the contents of these documents were reported in the article for the first time. In fact, every single company document Reuters falsely claims is new has been listed on an exhibit list at a trial, several of which J&J won. J&J documents shown to juries at trial, by either J&J or plaintiffs, are publicly hosted on J&J’s website www.factsabouttalc.com.

Nor is the reporting anything new. Far from a new theory or insight, Reuters has resurrected a disproven argument about asbestos in J&J’s talc that dates back to news reports from the 1970s. These recent allegations were covered by other outlets in January, which linked to the same documents that were allegedly new nearly a year ago. A Bloomberg article called the story “deja vu for some investors” citing its own article on the topic from over a year ago.

G. Reuters misreported the circumstances of the discovery of J&J’s documents in the Coker case.

H. Reuters withheld from its readers that no jury verdict in a talc case against J&J has been upheld on appeal, and every one that has been through the appellate process has been overturned.

I. Reuters claims that “J&J declined to comment further for this article” even though Reuters was provided with extensive documents—most of which were not included in the article. J&J offered numerous times to meet with Reuters in person to discuss with appropriate experts all of its allegations, and each time Reuters refused.