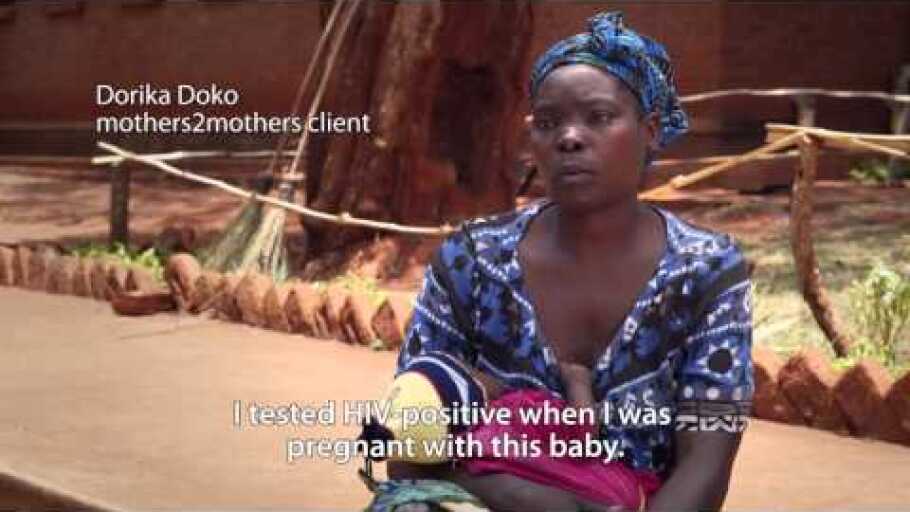 “It is possible for HIV-positive women to give birth to healthy babies as long as the pregnant mother follows medical advice,” says Dorika Doko, who found out she was HIV-positive when she was pregnant. “I started taking medication and gave birth to my baby without any problems.”

That is the reassuring message Dorika tells all her friends. Dorika received care and support throughout her pregnancy from mothers2mothers (m2m) mentors at Malingunde Health Center in Malawi.

Significant progress has been made over the last decade towards the elimination of pediatric AIDS. Yet each day, 600 children are still infected with HIV. Almost 90% of these children live in sub-Saharan Africa, and most acquire HIV from their mothers during pregnancy, childbirth, and breastfeeding.

m2m matches newly diagnosed pregnant women in Africa with specially trained mentor mothers who share a common bond – they are also living with HIV. These mentor mothers are part of the health care team, working alongside clinical staff to provide education and support, showing each woman how to keep her baby free from HIV and live a healthy life. By providing peer education and psychosocial support to HIV-positive pregnant women and new mothers, the program has proven effective in helping women access medical interventions that significantly reduce the risk of mother-to-child transmission of HIV, supporting them to lead healthy lives.

The program also has a positive impact on the mentor mothers themselves. Because of their employment by m2m and their own experiences and expertise, they gain financial security, become respected role models in their communities, and challenge stigma and discrimination around HIV.

“I encourage pregnant women to get tested for HIV/AIDS, so they can get timely and adequate counseling,” says Grace Kasunda, a community mentor mother in Mitundu, Malawi, who tested HIV-positive in 1997. “Through m2m initiatives we are able to mobilize women and encourage them to seek medical attention as soon as possible. It’s all about encouraging HIV positive women that this is not the end of the road.”