Since they debuted nearly a century ago, BAND-AID® Brand adhesive bandages have been called on to cover many a minor injury, including the myriad scuffs and scratches that come with childhood.

In fact, the brand's pint-sized consumers have had an endearing relationship with the sticky strips since Johnson & Johnson started selling them in 1921.

“From the beginning, they had a soothing effect on children,” says Margaret Gurowitz

Margaret Gurowitz,Chief Historian, Johnson & Johnson, the company's in-house historian. “And kids would use them in play, mimicking their parents’ behavior by cleaning and bandaging the boo-boos of their dolls and pets."

So it should come as no surprise that the bandages even starred in a popular children's book.

How a Book About Bandages Became a Kid Lit Classic

In 1950, executives at Simon & Schuster caught wind of kids' affinity for the product, which led to the publication of Doctor Dan the Bandage Man as part of the popular Little Golden Books series for children.

The story stars a young boy named Dan who gets a scratch on his finger while playing with friends. His mother cleans the injury and puts a bandage on it, and Dan instantly feels better. Using his newfound knowledge of first aid, he then happily cleans and bandages the small wounds (both real and imagined) of his toys, pets and family members.

“Doctor Dan the Bandage Man brings up a tremendous amount of nostalgia and has multigenerational appeal. It has absolutely become a classic.” 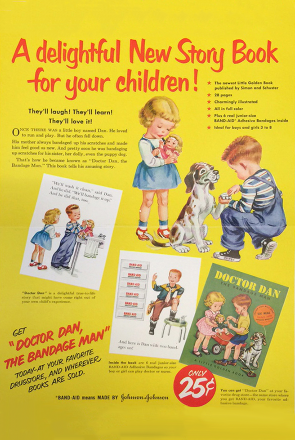 A fun poster advertising the book from 1950

For its first print run, the publisher partnered with Johnson & Johnson to include six BAND-AID® Brand adhesive bandages with each book, so children could practice the simple first aid techniques illustrated in the story.

Doctor Dan the Bandage Man struck a chord: At 1.75 million copies, it was the largest first printing of a Little Golden Book at the time—and went on to become one of the most popular of all time in the series.

Nearly 70 years later, the book is still available through Penguin Random House, which now publishes the Little Golden Books. It is also part of the Smithsonian Museum’s permanent collection, where it is recognized as being a key piece of American culture.

“Doctor Dan the Bandage Man brings up a tremendous amount of nostalgia and has multigenerational appeal,” Gurowitz says. “It has absolutely become a classic.”