Share
For the first installment of our J&J Lightbulb Moment series—which looks at pivotal "aha moments" at the company that had a lasting impact on healthcare—we delve into how a chance meeting on a cross-country trip inspired a life-changing invention.
By Ayn-Monique KlahreJune 07, 2017
Today's Top Reads Close

etween roughing it in the great outdoors on a camping trip to tackling some of those long-awaited home improvement projects, injuries abound come summertime, making it prime first aid kit season.

But the next time you reach for those handy medical supplies to patch up a boo-boo, consider that there was a time when staples, like bandages and gauze, weren't commercially available to consumers.

That all changed in 1888, when Robert Wood Johnson had a fortuitous conversation on a train. He was on his way from the company's headquarters in New Brunswick, New Jersey, to Colorado for a vacation—and happened to sit near the chief surgeon of the Denver & Rio Grande railroad line.

The Founding of First Aid Kits

Johnson and the surgeon got to talking, and Johnson learned that workers who were servicing the locomotives and laying down the railroad's cross-country tracks were frequently—and seriously—injured.

"Not to get too gory, but we’re talking about a lot of crushed limbs and missing fingers,” Gurowitz says. Without the tools and knowledge needed to stabilize such injuries, they could often lead to fatalities. 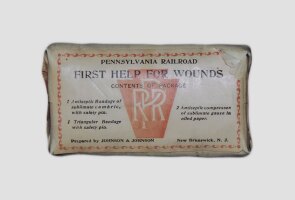 This information inspired Johnson, who wrote to the surgeons of different railroads to find out what they’d need in a first aid kit. Armed with this intel, Johnson developed the first commercial first aid kits—one for the railroad (shown at right) and another for general consumer use.

“The earliest first aid kits included items like sterile dressings, sutures and surgical tape,” Gurowitz says. The supplies were housed in sturdy metal boxes, with instructions for how to address common injuries printed on the outside.

By 1890, the kits were so popular that Johnson & Johnson made more versions, including large-scale branded kits for different railroads, factories and public buildings, and, eventually, smaller kits tailored for car and air travel and even one for Scouts.

“Whenever there was new technology, like the automobile or airplane, the team would anticipate a need for a first aid kit,” Gurowitz says.

So the next time you reach for a first aid kit on the soccer field or your cross-country road trip, be grateful for that serendipitous conversation more than 100 years ago.