Share
We crack open the pages of a special issue of Red Cross Notes, a company publication that spotlighted several ways surgical care changed after the war—and how Johnson & Johnson contributed to many of the advances.
By Meghan RabbittNovember 10, 2016
Today's Top Reads Close
Share expand 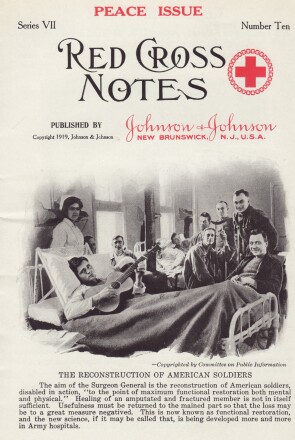 When World War I ended on November 11, 1918, it left an unprecedented legacy: more than 10 million soldiers had died and countless more were left wounded. The war also had an impact on medical professionals, who had to invent new ways to minimize injuries and loss of life among soldiers.

Johnson & Johnson's early leaders realized the value of these learnings and decided to produce a special company publication that featured the various wartime medical innovations that could help soldiers in future conflicts—and civilians in everyday life, too.

So for this month’s peek at a fascinating historical find from our company archives, we asked in-house historian Margaret Gurowitz

Margaret GurowitzChief Historian, Johnson & Johnson to crack open the pages of a special issue of Johnson & Johnson’s Red Cross Notes publication, which was distributed to medical professionals shortly after World War I.

How the War Changed Medical Care

World War I created unique situations for medical professionals, including the fact that injuries were often made worse thanks to infections brought on by muddy trench warfare. In response, Johnson & Johnson stepped in to mass-produce a new antiseptic wound treatment, called the Carrel-Dakin system, to ensure that the product made it onto battlefields across Europe.

“And this was in addition to round-the-clock production of sterile dressings, sutures and bandages to also help the wartime effort,” Gurowitz says.

Prior to the invention of the Carrel-Dakin system, doctors often had to resort to amputation as a first course of treatment to save lives on the battlefield. But the system now enabled them to better irrigate deep wounds sustained from automatic weapons fire during World War I, helping to reduce infections and the need for amputations. Red Cross Notes highlighted this advance so non-battlefield surgeons could also learn about it.

The publication also featured a novel treatment produced by Johnson & Johnson called Redintol that was used to treat soldiers who had suffered burns during the war. American doctors had appealed to the company to manufacture a product similar to one originally developed in France that was difficult to obtain stateside. Redintol, a paraffin and resins compound that doctors melted onto the affected area, helped heal severe burns, while minimizing scarring.

“Even though there wasn’t a great deal of agreement or information at that time about how to manage ‘shell shock,’ the fact that this issue of Red Cross Notes mentioned the importance of treating the mind shows that it was a concern even then,” Gurowitz says. “Service members need help to recover from the devastating effects of war—no matter where or when they serve.”