Adventures in Advertising: How Johnson & Johnson Left Its Mark on the Early Days of TV

Share
In time for TV's big awards weekend, our Chief Historian shares how the company supported a hit family show in the 1950s.
By Magdalena PuniewskaSeptember 18, 2019
Today's Top Reads Close

Since its founding in 1886, Johnson & Johnson has been a healthcare pioneer. And in the 1950s, it became an innovator on the silver screen too as one of the first companies to sponsor ads on TV.

“Johnson & Johnson always strove to be ahead of the curve,” says Margaret Gurowitz

Tune in to learn more about Johnson & Johnson’s first major foray to the tube.

TV Adventure, Brought to You by Johnson & Johnson

In the 1950s, television began replacing radio as the must-have entertainment source in American homes. In 1950, just 9% of Americans had televisions; by 1960, that figure had jumped to 90%. As a result, companies started to move their advertisements from radio to TV as well.

A common advertising practice that stuck around from radio was sponsorship. As opposed to buying just one commercial slot during a program, companies would spend more to be the “patron” of that show, often beginning and ending their ad with the words, “This episode was brought to you by …”

Johnson & Johnson was one of television’s first major sponsors. In 1955, it backed The Adventures of Robin Hood—a family-oriented program that followed legendary outlaw Robin Hood and his devotees as they fought injustice in and around Sherwood Forest in England. 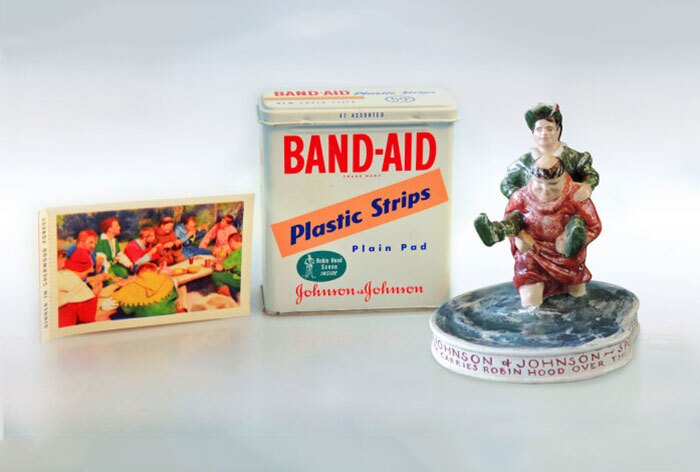 To help create excitement before the show aired, special tins of "Sherwood Green" BAND-AID® Brand adhesive bandages were created that contained an Adventures of Robin Hood trading card; a collectible figurine of Friar Tuck giving Robin Hood a piggyback ride was also produced (all shown above). “Johnson's® Baby Shampoo also ran a promotion through which consumers could send in a box top from the bottle and 50 cents to get a special Robin Hood hat,” adds Gurowitz. 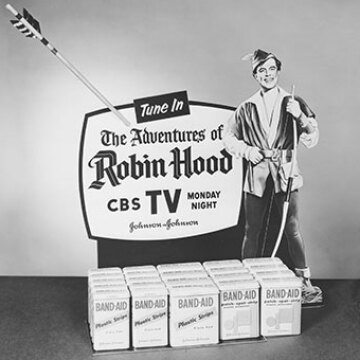 Once the show premiered, the company was introduced in the title sequence, acknowledged in the credits, and products were highlighted during commercials. Johnson & Johnson also led a nationwide contest for 30 Boys Clubs in 20 cities across the U.S. tied to the show.

“Children were asked to write up what they would do for their community if they were Robin Hood," explains Gurowitz. "The prize for the best entry was a trip to England."

Today, the company continues its onscreen legacy and history of supporting underserved communities through endeavors like 5B, a recent documentary about the country's first dedicated AIDS unit in San Francisco that won the Entertainment Lions Grand Prix award this year at the Cannes Lions International Festival of Creativity.