When the 8.3 magnitude quake struck, the company mobilized to send supplies and other aid to the city—a practice that continues to this day.
By Lindsay Lambert DayApril 17, 2017
Share
Share
Today's Top Reads Close

Johnson & Johnson has a storied history of helping those in need. What are the origins of the company's disaster relief efforts?

It was early morning on April 18, 1906, when San Francisco was struck by a massive earthquake that registered 8.3 on the Richter scale and caused major damage throughout the city. 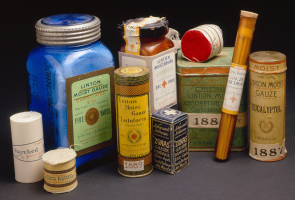 Immediately afterward, Johnson & Johnson sales agents in San Francisco were able to get special permission to telegraph an appeal for help to company headquarters in New Jersey.

The railroad ran right through our New Brunswick campus (and still does), so it was very easy to load rail cars full of such medical supplies as gauze, sutures and bandages and get them out to San Francisco as quickly as possible. The company also sent monetary help, and employees took up their own collection and sent aid, too.

In a 1913 newsletter, Fred Kilmer, Johnson & Johnson's Director of Scientific Affairs at the time, wrote: "Johnson & Johnson sent a cash contribution of one thousand dollars to the San Francisco sufferers; at enormous expense they sent by express, within thirty hours, a supply of goods for emergency use in the field. To all druggists and hospitals who had suffered by the earthquake they extended their sympathy in a substantial manner ..."

In 2006, to mark the 100th anniversary of the earthquake, Johnson & Johnson made a contribution to the San Francisco Fire Department's Neighborhood Emergency Response Team training program to help fund disaster relief preparedness for the future. The company also donated a disaster relief module, which contains cases of medical and personal care supplies, to the city for use in future emergencies.

Providing aid to those in need is one of Johnson & Johnson's guiding principles and it continues to this day through support during disasters like Superstorm Sandy, the Syrian refugee crisis and the Ebola outbreak, and through our ongoing partnership with Save the Children.