Pioneering With Papaya: The Secret Ingredient Used to Treat Indigestion in the 1800s

The holiday season can do a number on your stomach. But as Johnson & Johnson's in-house historian tells us, things weren’t so different in the 19th century—and we made the products to prove it.
By Liz KriegerDecember 08, 2016
Share
Share
Today's Top Reads Close

Johnson & Johnson has a long history of making products to help treat indigestion, dating to the late 1800s. What was the first product it produced for calming an upset stomach?

Margaret GurowitzChief Historian, Johnson & Johnson: Stomach problems were really common during this time period. For starters, the standard diet was pretty heavy on meats, starches and sweets—all of which can be heavy on the stomach.

Plus, the Industrial Revolution brought about immense change, which led to a lot of stress ... and indigestion. 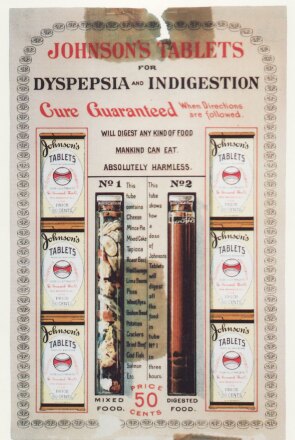 Johnson & Johnson has always done a good job of zeroing in on healthcare problems in need of solutions—and the company’s earliest leaders were no exception. So they set about experimenting with remedies for people's stomach woes.

In 1887, the company came out with Papoid tablets that contained extracts of papaya enzymes. A later product, Johnson's® Digestive Tablets (shown right), also had papaya extract as its main ingredient.

It’s not surprising that the company looked to nature to treat indigestion because many remedies were made from natural extracts back then. Papaya, in particular, was known to contain powerful enzymes—strong enough to tenderize meat, in fact!

Johnson & Johnson sold Papoid until the 1950s, when scientific advances made the product obsolete. Today, people can turn to more modern treatments for ailments like heartburn, such as Pepcid®.

Did somebody say holiday parties?