Share
In time for Halloween, we dig into our archives to spotlight frighteningly clever advertisements from as far back as 1887.
By Meghan RabbittOctober 05, 2016
Today's Top Reads Close
Share expand 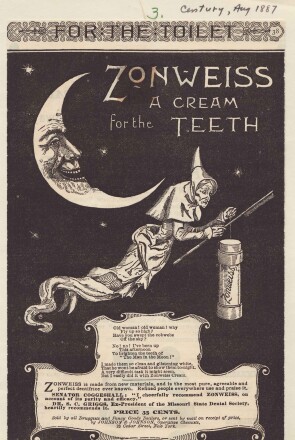 When you’re a company that has been around for 130 years, you have archives teeming with rich historical materials just waiting to be unearthed.

Margaret Gurowitz,Chief Historian, Johnson & Johnson, to comb through our museum records for fascinating finds from our past.

To kick off the series this October, she’s giving us the skinny on two spooky ads—one for tooth cream and the other for an iconic bandage product—just in time for Halloween.

According to Gurowitz, this 1887 advertisement for Johnson & Johnson’s first consumer product—Zonweiss Tooth Cream—was likely inspired by a broom-toting character from a popular children’s nursery rhyme of the era, “There Was an Old Woman Went Up in a Basket.” But in place of a broomstick, this woman flies the night sky with an old-style toothbrush and a canister of tooth cream.

Zonweiss: The Johnson & Johnson Invention From 1887 That Inspired People to Brush Their Teeth

Zonweiss was an innovative offering when it debuted in 1886: It was a tooth-cleaning product that could be used by multiple family members without cross-contamination. The Zonweiss pot came packaged with a small spoon that each person could use to spread the cream onto a toothbrush.

“Until that point, everyone would dip their toothbrushes into the same jar, which was really unhygienic and an easy way to spread germs," Gurowitz explains. 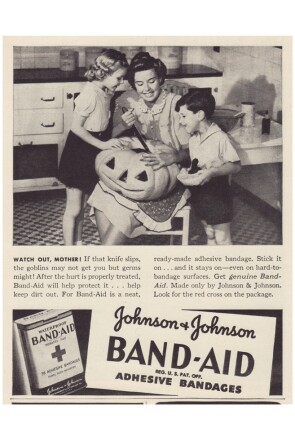 It looks like a Halloween nightmare waiting to happen: One slip of that big butcher knife and the picture-perfect mom carving a jack-o-lantern in this ad will be reaching for a box of BAND-AID® Brand Adhesive Bandages.

DryBak: The First Waterproof Bandage Ever Made by Johnson & Johnson

Gurowitz explains that when Johnson & Johnson first launched the BAND-AID® brand in 1921, advertising focused on how the product worked. But by the 1930s, when the ad at right appeared, messaging pivoted to focus more on creating a need for the bandages, such as having them on hand for your kids to help protect cuts and scrapes.

Here’s hoping that the moms who saw this ad spent Halloween dealing with more “boos” than “boo-boos.”