49
Our Heritage J&J Museum Find of the Month

Windows on the Past: The Johnson & Johnson Employees Who Were Forever Commemorated in Stained Glass

49
In the 1930s the company commissioned a series of colorful panels to pay homage to men and women who worked at Johnson & Johnson. For Employee Appreciation Day, we tell the story behind the art.
By Marisa CohenMarch 06, 2020
Today's Top Reads Close
Share
Did you like reading this story? Click the heart to show your love. 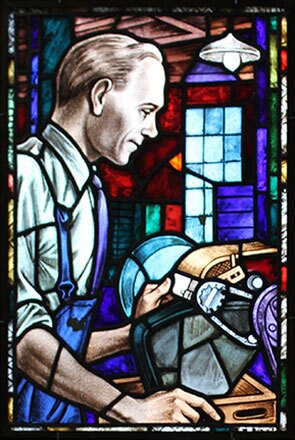 A window showing an employee using a material-shaping tool

When you think of majestic stained-glass windows, you might picture a soaring Renaissance cathedral, a university library or a grand estate. But for many years, a glorious series of 12 stained-glass windows designed by Frederick Soldwedel also adorned the walls of a building at Johnson & Johnson’s headquarters in New Brunswick, New Jersey.

And the subjects of these works of art were not biblical figures or monarchs, but hardworking employees of the company, proudly putting in a day’s work.

“Our then Chairman and CEO General Robert Wood Johnson felt that stained-glass artwork was one of the most permanent and beautiful ways of perpetuating memory,” says Margaret Gurowitz,

What makes these windows even more remarkable, points out Gurowitz, is that they were commissioned and created in 1936, during the Great Depression. “At that time, most companies were focusing on cutting expenditures," she explains. "So this shows just how important Johnson & Johnson has always considered its employees to be.”

One such employee was Elizabeth P., who joined Johnson & Johnson in 1886, the year it was founded.

The panel featuring Elizabeth is currently on view at the Wolfsonian Museum in Miami. According to museum materials, Elizabeth became a forewoman, and in 1939 earned $1,500 a year—a salary that was ahead of the national average then for all men and women workers. 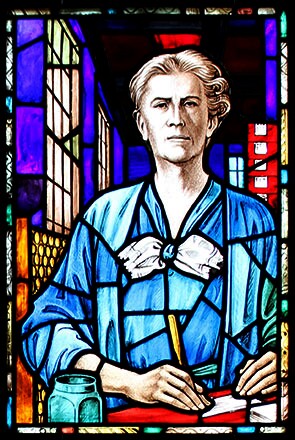 A window depicting Elizabeth P., who was a label department supervisor

“She was an early label department supervisor,” says Gurowitz, adding that this is why Elizabeth is depicted adhering a label to a jar.

Other subjects include a woman from the surgical dressings department shown folding bandages, a pipe fitter, a woman washing glassware in the company’s research labs, a lathe (a machine used for shaping materials like wood or metal) operator and an executive in a shirt and tie. Each is depicted in a dignified pose, with details giving clues to their line of work.

Eventually the building was demolished when changes were being made to the company's New Brunswick campus. Prior to its razing, each window was carefully removed, framed and presented to the family of the employee depicted in the work of art. “Many of the windows are still likely cherished family heirlooms,” Gurowitz says.

Four of the windows were subsequently acquired by the Wolfsonian Museum in Miami. The panel featuring Elizabeth is currently on view at the museum, as part of an exhibit titled “A Universe of Things,” in a section called, appropriately, “Women’s Work.” According to museum materials, Elizabeth became a forewoman, and in 1939 earned $1,500 a year—a salary that was ahead of the national average then for all men and women workers.

“A number of years ago, I had the privilege of seeing one of the windows in person," Gurowitz says. "It truly was an eye-catching and awe-inspiring piece of artwork.”