A Medical Miracle in Mexico: The Fabiola Lopez Valenzuela Story

From the moment that Fabiola took her first breath 14 years ago, her battle to survive began.

Her story unfolds in the mountains of Chihuahua, in a remote village about three hours from the state’s capital. The year was 2002, and Fabiola’s parents, Maria Elena Valenzuela and Candelario Lopez, were getting ready to welcome their daughter into the world.

The plan was to give birth at home with the help of a midwife, but as Maria Elena entered the final stretch of pregnancy, she realized something was terribly wrong. Maria Elena was in labor, and as her contractions progressed at a rapid and alarming pace, the couple rushed to a local clinic.

"I remember the doctor told me to push with all of my strength because we were running out of time to deliver the baby safely, and if we didn’t succeed, my life and hers would be at risk,” recalls Maria Elena. "I fainted, and when I awoke I overheard the doctors whispering that something was not right.”

There was also an added complication that day: Fabiola was born on a holiday, so specialized doctors weren’t available to perform the necessary operation. Since there was no ambulance driver on duty, either, the doctor who delivered Fabiola whisked her into his car to drive her to the capital for emergency surgery.

“Everything was happening so fast—I’d hardly recovered from the delivery when the doctor took my baby away,” says Maria Elena. “I wasn’t able to travel, so my heart was broken because I had to stay at the hospital. I was feeling so many emotions: sad, frightened and angry. And I was asking myself, Why me? I thought my pregnancy was going well.”

The First of Many Medical Challenges

Fabiola’s surgery was complicated. The exposed spine had to be aligned, the opening along her back had to be sutured, and a valve needed to be inserted into Fabiola’s head to drain excess fluid that had accumulated on her brain.

“I wasn’t able to see her until 15 days later, when I was discharged,” says Maria Elena. “I will never forget that day, seeing her sleeping in her crib. I said, ‘My sweet baby, I am here.’ Fabiola opened her eyes immediately, as if she had recognized my voice.”

Fabiola's battle for survival was over, but she had a new one to wage: the battle to live.

Due to Fabiola’s condition, Maria Elena was told that her daughter would never walk, and she would face other challenges due to compromised motor skills. But Maria Elena remained undeterred, vowing to do whatever she could to give her daughter a better quality of life.

“Since she was born, I’ve taken Fabiola every week to therapy appointments,” she says. “When a rehabilitation center was built in our area, I immediately applied for her to go. Fabiola spent two years on the waiting list, but once she was selected at the age of 7, we never missed a day. We took public transportation there, and I got her on and off the bus myself, sometimes with the help of other passengers.”

But despite Maria Elena’s best efforts, Fabiola struggled with the fact that even sitting proved painful and exhausting because scoliosis had left her with a malformed spine.

That is until the family met Lorena Santillana, President of Fundación Xiomara, an organization dedicated to helping children with orthopedic problems.

Santillana introduced Fabiola’s parents to Dr. Enrique Rosales, a pioneer in orthopedic surgery in Mexico, and he contacted Global Spine Outreach (GSO), an international organization that specializes in providing children with much needed spinal surgery.

Upon hearing of Fabiola’s situation, GSO reached out to DePuy Synthes to see whether the company’s titanium VEPTR® Titanium Rib could help stabilize Fabiola’s spine. 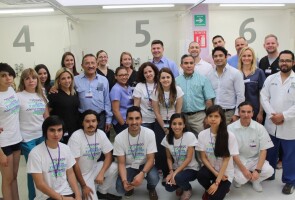 The team that helped Fabiola gain a new lease on life

“The DePuy Synthes Expedium® 5.5 System used during the procedure allows surgeons to adapt the device to the anatomy and needs of every patient, so they know they have something reliable in their hands,” says Silverio Aja Pérez, Spine Business Unit Manager, Johnson & Johnson Medical Mexico, S.A. de C.V.

Once the device arrived in Mexico, volunteer surgeons from GSO performed the delicate, 13-hour procedure in the capital of Chihuahua.
“There were risks, but we had not come this far to give up,” says Maria Elena. “There were moments when I wanted to crumble, waiting all those hours outside the operating room, but then I’d remind myself of Fabiola’s enormous desire to live. If she can do it, why can’t I?”

It’s only been a few months since the surgery, but Fabiola’s posture has already improved significantly, and she’s even grown two inches. She can now spend an entire day at school without getting tired, and sleep on her back—a simple act that wasn’t possible before.

But perhaps most rewarding is the impact that the surgery has had on Fabiola’s spirit.

Next year she will turn 15—and she’s already planning her quinceañera, a celebration that marks the passage from childhood to womanhood.

Fabiola’s wish? To wear a red dress and dance the waltz like any other teenager, even if it’s from her wheelchair.

Her newfound will to live is strong.