Share
After three kids, Nosiphiwo Skota thought she knew all there was to know about child-rearing—until she began receiving messages from MomConnect. For Mother’s Day, she shares why her phone is now an invaluable tool in her parenting arsenal.
By Nosiphiwo Skota, as told to Sean ChristieMay 10, 2018
Today's Top Reads Close
F

or many soon-to-be parents, scouring the web and peppering an ob-gyn with questions for how to give birth to a healthy, happy baby is commonplace. But for millions of moms around the world, reliable internet access—not to mention reliable access to medical care—isn't always a given.

That's why, since 2010, Johnson & Johnson has been supporting mobile messaging programs designed to target low-income mothers in 10 countries—programs like MomConnect, an initiative of the South African National Department of Health that has reached 1.8 million moms in three years and is now available in 95% of health clinics in the country.

After pregnant women visit their local clinic for the first time, they're encouraged to sign up for the MomConnect service, which sends health information about baby development and childcare through text messages (it's compatible with even the most basic mobile phone) or WhatsApp.

How can two simple healthcare messages a week make a huge difference in a parent's life? We spoke to Nosiphiwo Skota, a mother of four—and MomConnect evangelist—to find out.

Nosiphiwo Skota: "My mother had six kids—two girls and four boys. So I never felt lonely as a child because I was never alone. We lived in an earth house in a place called Baziya in the Eastern Cape, which is near the village of Qunu, where Tata [Father] Nelson Mandela was born.

We were a happy family. My older sister was the firstborn, and also my closest friend. We were quite traditional, with the females doing household chores like cleaning, cooking, washing clothes and ukutheza, which is fetching firewood.

Why Africa Is a Hot Spot for Healthcare Innovation

I did fine in school, but I had a shock when my sister married and became makoti [a Xhosa bride] and entered the home of her husband’s family. That left me with all the household chores, which I really did not like, although sometimes one of my brothers would help a little bit.

I wanted something else for myself—I wished to become a nurse. But in the end, I got married in June 2005 while I was still in school, in grade 11, and left home to join my husband in Cape Town.

I can’t lie to you: It was difficult, a completely different life. We were living in Khayelitsha in a small house, which was actually more like an umkhukhu [shack]. It was never quiet, not even at night, and there was crime and violence like I had never seen. I had no family there, and I knew nobody.

After just three months there, I got pregnant.

I can’t say that I was prepared for it, but at least I was able to talk to my mother, who became my adviser. If I was feeling sick, or my legs were swelling, I would call her and she would tell me it is this or this, and you must do that. My husband used to joke that she was like my Google—if I was confused about something with the pregnancy, he would say, "Google Mama." That became her name in our house: Mama Google.

I gave birth to my first son in October 2006. We named him Kungawo, which means God’s power in Xhosa. My husband and I both have strong faith, which helped us get through that first year, but the truth is, I was very ignorant and just trying to make it through every day without something bad happening.

In 2007, I visited the Eastern Cape for the funeral of my sister’s husband. Afterward, I looked for a temporary job so I could have enough money to return to Khayelitsha. I remember I wasn’t feeling well at the time, and a few weeks later, I was in a taxi when I started vomiting. Each time the taxi stopped to let me out, the women I was riding with said, "Sisi, you are pregnant." But I was still suckling my firstborn and I said to them, "How can I be pregnant with such a young child, and with my husband not here?"

The SMS messages kept coming after my daughter was born, and they convinced me to do some things differently than I’d done with my other children. MomConnect has definitely taught me a lot. I am even teaching Mama Google a few things!

I did visit the local clinic, and they confirmed that I was already four months along. We called our second boy Inathi, which means God is with us, but I can’t lie—my faith was being tested. Both babies were in towel diapers, and if I wasn’t breastfeeding, I was washing. Feeding and washing, that was my life.

After Inathi, I went to Nolungile Youth Clinic for family planning sessions with a nurse, who put me on contraception. I wanted more children, but I also knew that if we were surprised again it would be too much.

In 2012, we decided to try again. We wanted a girl—my husband maybe even more than me. We were overjoyed to have Aluve, another beautiful boy, but afterward my husband said, "That’s it, I’m done." He was convinced by now that we would never have a girl, but I knew we would, although I said nothing.

Five years after Aluve was born, I got pregnant for the fourth time in 2017. At my first checkup, the nurse said, "Have you heard about MomConnect?" She explained that it uses SMS to give mothers information about pregnancy and caring for a baby in its first year. I told her that my advice always comes through the phone in the form of Mama Google anyway, so it was fine to register me for this additional service.

One of the first messages I received was about the importance of drinking milk and amasi [fermented milk] during pregnancy, so that the baby can develop strong bones. I welcomed this because I love amasi, and because I was unable to stand the smell of meat in those months. I had heard this is a sign you are pregnant with a girl, so I drank a lot of amasi to make sure my baby girl’s bones would be strong! Two MomConnect users discuss a message sent by the service

That birth was the most difficult of the four. The labor pain was something else and it went on for a long time, but when she was delivered and I saw her, I just shouted Ivakele! Which means: God has answered!

The SMS messages kept coming after she was born, and they convinced me to do some things differently than I’d done with my other children. One message I liked advised that windows should be open while cooking, because a baby’s growth can be compromised by breathing smoke and fumes.

Other messages advised that a baby only needs breast milk in the first six months, which challenged me because, in my culture, it is believed that the baby needs cereal and water, as well as breast milk, to grow well. I fed my boys a lot of cereal, but with Ivakele, it has only been breast milk from the start. And although I often feel like adding something out of habit, another message always comes reminding me of why I should not do this.

In fact, I have just come from the clinic, and Ivakele actually weighs more at 4 months than her brothers did at the same age. Also, she doesn’t suffer from constipation, which was a problem for her brothers.

MomConnect has definitely taught me a lot. I am even teaching Mama Google a few things!"

Hear what fellow moms Nelisa, Thandokazi, Thandeka, Gugu and Irene learned about themselves and their babies through the MomConnect experience in this video: 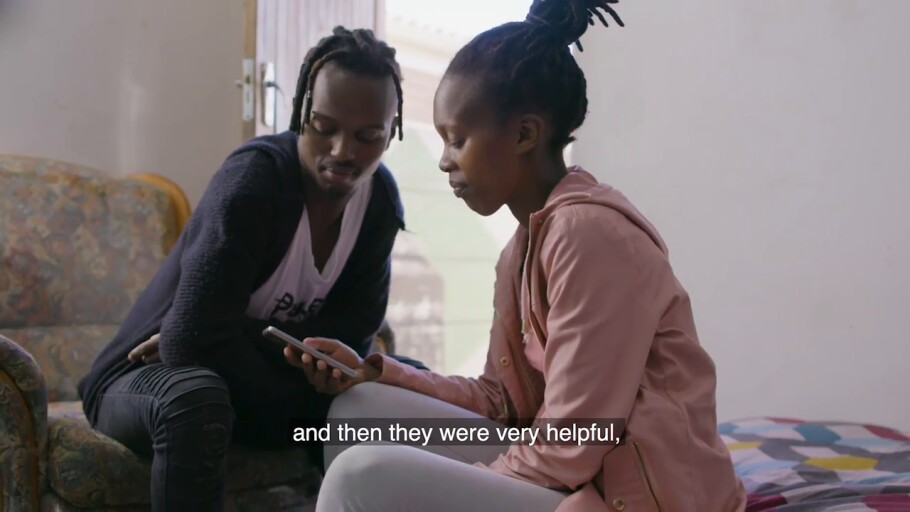