Share
Would you bike across states to help fight cancer? What if you had the disease yourself? For Carmen, who was diagnosed with multiple myeloma 15 years ago, it's not even up for discussion.
By Susan SegrestAugust 28, 2017
Today's Top Reads Close
W

hen Carmen Phaneuf met Mike Grant 20 years ago at a University of Pennsylvania graduate student happy hour, she asked him three questions: Do you ski? Do you sail? And do you ski up in Vermont at Sugarbush?

He got two out of three right, and they’ve pretty much been a high-energy team ever since.

The ride is also personal: Carmen has multiple myeloma, which is considered incurable but treatable, thanks to recent advancements in research.

DARZALEX™: The Multiple Myeloma Drug That Could

According to the American Cancer Society, the disease occurs when malignant plasma cells multiply in the bone marrow, crowding out the normal plasma cells that help fight infections. These malignant myeloma cells can then cause tumors, called plasmacytomas, which can damage the kidneys, lower immune function and cause bone problems.

The 3,400-mile Road to Victories ride, from California to Connecticut, kicks off on September 2—and Carmen, 49, and Mike, 55, will be part of a team of cyclists personally impacted by the disease. Carmen and 11 other riders will tackle the first leg of the trek, spanning from Los Angeles to Flagstaff, Arizona. Mike will be one of seven riders participating in the full cross-country ride from Los Angeles to Fairfield, Connecticut.

In advance of the big race, we sat down with the couple to share the story of Carmen's diagnosis 15 years ago, her current treatment and how they’re preparing for the Road to Victories ride. 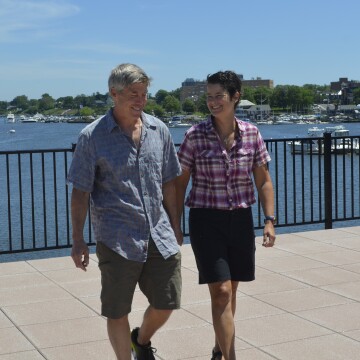 Mike and Carmen near their home in Little Silver, New Jersey

Carmen: It was September 2002 and Mike and I were getting ready to have a child, so I went to my primary care doctor to get prepregnancy blood work done just to make sure everything was good.

The test results came back and I was mildly anemic. That wasn’t really abnormal, but my platelets were also a little low. I was like, “What’s the big deal?” But my doctor wanted me to see a hematologist. Eventually, after many rounds of tests, the hematologist did a bone marrow biopsy, and was concerned.

He said, “You either have a lymphoma or you have something called multiple myeloma.” Mike and I Googled it and learned multiple myeloma had around a three-year life expectancy, was prevalent in African-American males and there were only two treatments on the market at the time. I was 34 years old and was like, “WHAT?”

Mike: My first response was shock and fear. We’d just come off a long sailing adventure, which we’d chosen to do before we really settled into parenthood. We were riding high and it really felt like getting chopped off at the knees. I remember talking to a really good friend of ours and just weeping into the phone.

Carmen: The doctor referred us to another expert. She said, “There’s a guy, Dr. David Siegel, and he’s the best.” We told Dr. Siegel we wanted to have a child. Back then, I was the first patient he’d ever had with multiple myeloma who wanted to get pregnant.

At that point, I had what is called smoldering myeloma, which means the myeloma is static and may not progress for months or even years, so we were in a watchful waiting period. Dr. Siegel said, “If your tumor markers remain stable over the next six months, then let’s see if you can get pregnant, and I’ll support that.”

I’ll never forget May 5, 2011, when the nurse practitioner called to break the news that I had a bone lesion on my pelvis. I was in shock. It didn’t matter how prepared I thought I was.

Mike: He also said they had no data to go on so he really didn’t know what to tell us. He looked directly into my eyes and said, “You can go ahead with it, as long as you are comfortable having a 10-year-old on your own.” It was a very touching but honest conversation.

Carmen: We went ahead and got pregnant immediately, and Rachael was born December 12, 2003. Three months later, we did blood work and my myeloma cell numbers had gone up a little bit. Three months after that, they had almost doubled.

For the next nine years, my numbers slowly crept up and I continued to have various diagnostic screenings, including getting MRIs every year, PET scans and more.

Mike: Other than going every three months to monitor her condition—and it’s always a little stressful to go to a cancer unit—we had nine years after the initial diagnosis of living a pretty normal life.

Carmen: In 2010, I had a bone marrow biopsy that showed the disease was progressing. Still, I thought: I’ve had time to prepare for this. I’m ready.

I’ll never forget May 5, 2011, when the nurse practitioner called to break the news that I had a bone lesion on my pelvis. I was in shock. It didn’t matter how prepared I thought I was.

Carmen: My first day of treatment was one of the hardest of my life. I was standing outside my cancer center in New Jersey, and I didn’t want to go in. The real journey was now going to start, and it was very hard to accept.

The treatments—which include stem cell transplants (where they collect my stem cells prior to chemo and give them back to me afterward), chemotherapy and more—are still ongoing because, with this condition, you pretty much have to be on constant treatment for the rest of your life. There is no cure.

Mike: The doctor told us that these stem cell transplants generally work for about two years, but they lasted for over four, which was good. But then Carmen's numbers started going up again, so after consulting with our transplant expert, we decided to try an allogeneic transplant, which involves collecting stem cells from a matching donor and transplanting them into the patient to suppress disease and restore the immune system.

Two matches fell through, but the third was a perfect match—a 23-year-old man in Germany.

Carmen: The first 100 days are the most crucial, and I did great. Treatment is ongoing and we are being proactive, trying different things as new issues or complications develop. Six months after the transplant, I did a triathlon, and then Mike and I decided to participate in the Road to Victories race.

Gearing Up for the Big Challenge 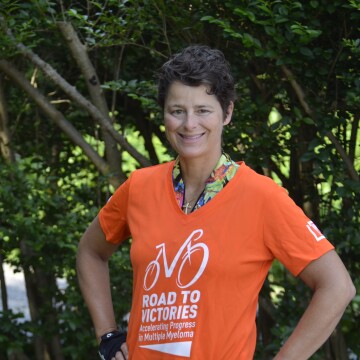 Carmen: We’re both working hard to get ready. I’m up to riding about 120 miles a week, and I have both a personal trainer and a personal cycling trainer.

Mike: I’m also spending 12 to 15 hours per week riding my bike, in addition to other training. But that's the easy part.

The MMRF’s track record of getting treatments for multiple myeloma approved in the time it normally takes for one is what's really impressive. We’re thankful to both the MMRF and Janssen Oncology for creating this platform and for supporting the research.

Carmen: This ride is going to be challenging, but a huge accomplishment. I’ve been through a lot in terms of treatment, so in that way, I’m so lucky to be able to do it. I have nothing to lose, so I’m going to do everything I can to just live life and live it in a quality way.

But more than that, I know I’m taking patients along with me for the ride. A lot of people look at me and say, “You don’t look like you have cancer.” And I don’t. But I know if there is no cure found, I will one day. 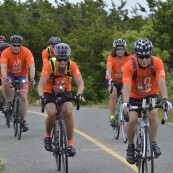