Some of the highlights: Coverage for fertility treatments went up to $35,000. The reimbursement for employees who adopt rose to $20,000 per child under the age of 18. And up to $20,000 is now provided for surrogacy assistance.

All of this is in addition to the fact that, as of 2015, all new parents at the company are eligible to take eight weeks of paid leave during the first year of the new child's birth or adoption, and mothers who give birth may have up to 17 paid weeks off.

These benefits have one overarching goal in mind: help employees not only pursue dreams of becoming parents—but also enable them to be able to spend time with their children in those key formative weeks as a new family.

In homage to Mother's Day, we asked Aubrey Martina

The Long Journey to Motherhood

My husband, Duke, and I got married in 2004. We always knew we wanted kids, so about two years in, we decided to stop not trying to get pregnant and see how it went.

Eighteen months later, I still wasn't pregnant. We were living in Bentonville, Arkansas, at the time and had to drive two hours to Tulsa to see a fertility doctor because there were none near us. When we moved to the Philadelphia area, we consulted with three additional doctors.

Over six years, I think we did seven rounds of intrauterine insemination (IUI) and four rounds of in vitro fertilization (IVF). We hit Johnson & Johnson’s then-lifetime max of $25,000 for fertility benefits. And I never did get pregnant.

Our doctor told us he didn’t know why I wasn’t getting pregnant—that we were in that 20% of people for whom everything checked out fine.

A Dad’s Story: How Adopting My Daughter from China Changed My Life

He wanted us to keep going, but I couldn’t do it anymore—not just financially, but emotionally. That was a really hard decision. But I realized the endgame was trying to have a family, not just getting pregnant. I said, "Maybe we need to look at adoption."

My husband was reserved about it at first. We had to do a lot of research and a lot of discussing. The more we read and the more we talked about the fact that we wanted a family, the more he got used to the idea.

We matched with Noelle’s birth mother in August 2012. I felt like she was my soul mate—it was the most emotional, awesome experience.

We met with a couple of agencies, and in October 2011, we had a home study—an intense screening process of all prospective parents that's done by a social worker. By that January, we'd started the matching process, during which you start talking with pregnant women who are making adoption plans.

We matched with a woman in August 2012, after learning about her background and the type of adoption plan she was looking for, and having a three-way call with her and her caseworker. I felt like she was my soul mate—it was the most emotional, awesome experience of personal connection. She let us know within 24 hours that she wanted to move ahead with us. We started emailing and calling to get to know her. 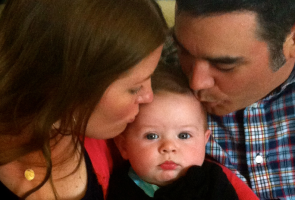 Martina and her family on her first Mother's Day

That October, we visited her in Cincinnati, where she lives. We met a couple of her friends. I felt like we had known her forever. She and I look a lot alike: We are the same height, and have similar hair. People have even said she could be my sister.

Every time we got a call from her, we were afraid she would tell us she had changed her mind. As our Cincinnati trip came to an end, I remember saying to my husband, "I don’t want to leave her."

In the end, it all worked out. You always think your child is a gift, but Noelle was, in fact, born on Christmas Day.

By combining the week Johnson & Johnson gave at the time for “new additions leave,” paid vacation time and unpaid time guaranteed by the Family and Medical Leave Act (FMLA), I was able to take six weeks off work when Noelle was born. I also took advantage of a $5,000 adoption reimbursement that was offered at the time.

What It Means to Be a Dad Today: 5 Modern Fathers Share Their Work/Family Balance Secrets

After traveling to be with Noelle’s birth mother prior to the delivery, and Noelle being in the hospital for 10 days afterward, it was reassuring to know that I wouldn't have to rush back to work after returning home. It enabled the three of us to foster a sense of togetherness. I remember playing with her, going for walks, taking a lot of pictures and videos and cuddling "skin to skin,” which played a critical role in her bonding with us.

Once I heard that the new policy includes eight weeks for new additions to the family, and more reimbursement for adoption, I called my husband and said, 'This could change things for us.'

Those weeks were so special, which is why I am proud of Johnson & Johnson's change in policy—and really excited for other families who get to take advantage of it. I also appreciate how the company is embracing the different ways we create our families, using positive adoption language and inclusiveness of LGBT families. 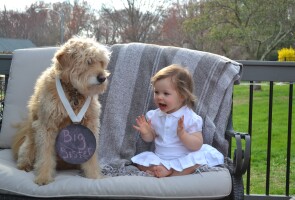 The birth mother's preference was to have a closed adoption, so we haven’t had any connection since, per her wishes. There are definitely days when it feels like a loss—you’re grieving someone who's no longer in your life who was so important.

But I’m so relieved and so grateful for what we do have to share with Noelle. We asked questions and wrote things down early in the process so I can tell her one day what her birth family traditions are. We also have a separate baby book about our adoption journey that we plan to share with Noelle when she’s ready.

This whole process has made me believe in fate—if we hadn’t gone through everything that we’ve gone through, we probably wouldn’t be the mother and father that we are today. We spent eight years trying to become parents; meanwhile, we grew up and figured out who we are and are probably better for it.

In fact, once I heard that the new policy includes eight weeks for new additions to the family, and more reimbursement for adoption, I called my husband and said, "This could change things for us." We’re not quite sure if we will decide to expand our family, but if we do adopt again, this makes it more feasible!