Share
Tackling a triathlon isn't for the faint of heart. But Mark van Ooij, an Associate Scientific Director for Janssen Vaccines & Prevention B.V., is doing just that—and he's taking what he's learned from his disease to propel him forward.
By Mark van Ooij, as told to Susan SegrestSeptember 06, 2018
Today's Top Reads Close
D

ealing with a chronic illness can be incredibly challenging.

For Mark van Ooij, who’s been battling ulcerative colitis and Crohn’s disease for much of his adult life, it felt as if it controlled almost everything he did. That is, until about five years ago, when a new treatment and a subsequent new outlook on life helped him go from being too weak to walk up a flight of stairs to training for his first full triathlon.

As Associate Scientific Director of Vaccine Process and Analytical Development for Janssen Vaccines & Prevention B.V., part of the Johnson & Johnson family of companies, van Ooij spends his days working on vaccines for such global health issues as HIV and influenza, as well as such emergency outbreaks as Ebola and Zika.

But the Netherlands-based 40-year-old is about to tackle one of his biggest challenges to date: competing in the grueling Challenge Almere-Amsterdam triathlon on September 8—a one-day, 140-mile event that will have him swimming, biking and running.

On the eve of the race, van Ooij opens up about what this feat means to him, and how he’s taken his life back from debilitating inflammatory bowel disease.

Mark van Ooij,Associate Scientific Director of Vaccine Process and Analytical Development, Janssen Vaccines & Prevention B.V.: "Growing up in the Netherlands, I was always very active, but that all changed when I turned 18.

I was diagnosed with ulcerative colitis (UC), a chronic disease in which the lining of the large intestine becomes inflamed and develops tiny open sores. The combination of inflammation and ulceration can cause abdominal pain and the urgent need to go to the toilet, among other symptoms.

I’d never actually been sick before, so I assumed that I could just take prescribed medication and everything would turn out fine.

But I became increasingly ill over the years that followed, and my colon became so inflamed that my body couldn’t absorb the nutrients from my food. After four years of constant illness, I joked that my prime sporting activity was running to the toilet—15 or 20 times a day.

Eventually, I was also diagnosed with Crohn's disease, which is similar to UC, but it can affect any part of the gastrointestinal tract. These two forms of inflammatory bowel disease (IBD) affect an estimated 5 million people worldwide and the causes are not very well understood, although it's thought that a genetic component is involved. Other people in my family also suffer from mild IBD, but I have the most severe case.

In people with IBD, the immune system mistakes food, bacteria and other common materials in the intestines for dangerous invaders. In response, the body sends white blood cells into the lining of the intestines, where they produce chronic inflammation and ulcerations. While there are times when the disease is more active than others, specific factors like stress and physical exertion can cause flare-ups.

For years, everything in my life revolved around how quickly I could get to the bathroom. Could I manage the 45-minute commute to the university that day? Was there a restroom close to my classes? Would there be a line for the toilet at an event I wanted to attend? Often, when my friends were out enjoying music festivals, I was at home with bowel cramps.

"How Things Changed the Day I Became a Dad"


Along the way, with the help of many specialists, medications and diet adjustments, I got it under control enough to complete my Ph.D. and begin a fulfilling career working to develop vaccines. And then a series of things happened that sent me in a new direction.
Share expand 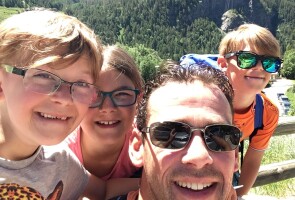 Mark van Ooij with his children (left to right): Kim, Lieke and Lars

I became a father to three children, who are now between 10 and 13 years old, which meant that my disease was no longer the most important, consuming thing in my life. Also, my outlook on the disease changed: I was able to better accept the fact that this was something I could have for the rest of my life and be less stressed about it. Around the same time, my symptoms began to subside.

But as with all chronic diseases, progress is sometimes followed by setbacks. I became resistant to some of my medications and was very ill for a time. This, however, led me to find different specialists, who found new treatments that have helped to better manage my flare-ups.

There’s actually a lot of exciting innovation going on with IBD. In fact, Janssen is doing work focused on the gut microbiome, which has made me feel even more hopeful for the future.

In some ways, competing in a triathlon is similar to having a chronic disease: There's adversity along the way, but there are also many things that you can gain from it.

Over the course of several years, my flare-ups became less frequent and less severe. My quality of life increased, and I could now do more with my kids. As they became more active, it motivated me to be more active too.

About five years ago, when colleagues started talking about participating in a quarter-distance triathlon—about .6 miles swimming, 27.5 miles biking and 6.5 miles running—I felt maybe it was something I could do, even though I hadn’t exercised since I was 18.

Of course, when I started training, I was worried about sparking a flare-up, which would make both training and retaining a good quality of life very difficult. I still vividly remembered when I was so sick that I lost more than 20 pounds in three weeks, and when I was so weak from my illness and other complicating factors that I couldn't walk up a flight of stairs—but I wanted to give it a try.

There were about 18 of us training together from the company, and it was a very tight group. It was such an amazing feeling when I completed that first triathlon, because I had to overcome so many hurdles, both physically and mentally.

"I've Been So Inspired—and I Hope I Can Inspire Others"


Last year, I decided to work toward competing in a full 140-mile triathlon in the fall of 2018, just after my 40th birthday.

In the past few months, I've trained about 15 hours a week with my coach. Also, and equally important, we’ve been working on the best way for me to get sufficient nutrition while I'm training and during the race—which isn’t easy for someone with a gastrointestinal disease.

It’s been very beneficial for me mentally. I find that after a full day of work, running helps clear my brain, and I often find solutions to problems I’ve been struggling with all day. Or, at least, they leave my mind for a while.

Triathlons are an endurance sport, so you have to enjoy the endurance aspect of it, even though it isn’t always easy. In some ways, competing in a triathlon is similar to having a chronic disease: There's adversity along the way, but there are also many things that you can gain from it, such as resilience and mental toughness.

I understand that, at any point in the future, I could have a relapse and not be in any shape to compete, so I’m very motivated to cross the finish line on the 8th of September—after living with a chronic disease for more than half my life.

I feel lucky. I was inspired by my colleagues to start running, and I’ve also been inspired by working at Johnson & Johnson. Being at a company that constantly strives to create the best possible solutions in healthcare really helps motivate me to be my best.

And now I’m hoping that, in some small way, I can inspire others. You don’t know what life will bring you and this full-distance triathlon is my personal testimony that, despite having an illness, the body and mind are able to do incredible things." 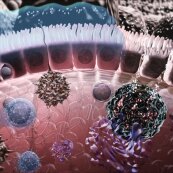 A Closer Look at How IBD Develops
Check out an award-winning film sponsored by Janssen that uses 3-D animation to show how IBD begins at the molecular level.
Watch the video