Share
When Rick Martinez learned he had cancer, his professional life at Johnson & Johnson turned personal: He suddenly found himself the subject of a clinical trial. For National Cancer Prevention Month, he shares his story.
By Molly TriffinFebruary 01, 2017
Today's Top Reads Close

I was trained as a physician in psychiatry and internal medicine, but much of my career has been dedicated to clinical research. As a research fellow with the National Institutes of Health in the 1980s, I designed and recruited patients for clinical trials. I also worked as a grant officer helping investigators secure federal grants to perform clinical trials.

In 1998, I joined the Janssen Pharmaceutical Companies of Johnson & Johnson and started designing clinical trials with elderly people. Back then, performing clinical trials on this population was unheard of—no one else was doing it. So although 40% of the elderly were prescribed an antidepressant, antipsychotic or antianxiety drug, you couldn't be sure of the dosage or treatment duration they needed.

A couple of years after joining Janssen, I became the Director of Corporate Contributions and Community Relations. Later, in a new role as Director of Corporate Social Responsibility for Latin America and the Caribbean, I got the chance to travel to South Africa, where I met a pair of researchers who were doing trials in pregnant women infected with HIV.

The prevailing belief at that time was that you didn't do clinical trials in pregnant women because you didn't want to harm the baby. However, in the absence of intervention, transmission rates in this population range from 15-45%. Researchers believed it could be possible to stop this transmission by giving the mother an antiretroviral drug. 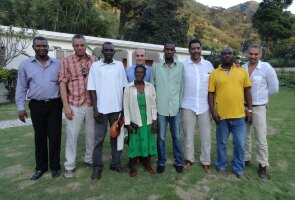 They were right—and it is now the standard treatment for women infected with the virus during pregnancy, labor and delivery or while breastfeeding. The researchers went on to receive the Nelson Mandela Award for Health and Human Rights.

My passion for clinical research has guided my entire career, but I never imagined that I, too, would one day be a patient in a clinical trial. It was a rare cancer diagnosis that moved my destiny in that direction.

The Rare Diagnosis That Upended My Life

In 2014, I began seeing a physical therapist. I had been experiencing lower back pain, which I thought was from all the usual reasons—sitting improperly in front of a computer, not exercising enough. But I wasn’t improving, so I got an MRI.

I was shocked to see the scans: I had a fist-sized cancerous mass in my sacroiliac joint. The hip is made up of three bones, and the sacroiliac joint is the space in between those bones. I remember seeing the blood rush out of my orthopedic surgeon’s face as the results registered.

My first reaction was denial. You just don’t believe that it’s happening to you. It’s gotta be a mistake. But I only felt that way for a millisecond because the bottom line is that it is you. Then I cried.

In an attempt to extract the cancer, I underwent a 17-hour surgery that removed half of my hip and left me unable to walk. Three months later, I was devastated to learn that the cancer had reoccurred.

And then I moved into action. My orthopedic surgeon gave me the names of some specialists, and I immediately began making phone calls. In the beginning, I didn’t understand how serious it was. So hope was part of it, too. Maybe this could be fixed.

All of the doctors I consulted told me it was a complicated case because the cancer had invaded my spinal column, the muscles in my back and the bone in my hip—and it had destroyed my sacral nerve. Fortunately, I found a surgeon at Memorial Sloan Kettering in New York City who had expertise with my problem, which turned out to be a rare bone cancer called chondrosarcoma.

In an attempt to extract the sarcoma, I underwent a mutilating 17-hour surgery that removed half of my left hip and left me unable to walk. Two cycles of chemotherapy followed.

Three months later, I was devastated to learn that the cancer had reoccurred.

That’s when my surgeon suggested doing genetic testing on my tumor. Most cancers form because of mutations in cells that promote their abnormal growth. The genetic testing determined that I had such a mutation, which allowed my oncologist to find out whether there was a clinical trial focused on testing a medication to treat that specific mutation.

As it turned out, there was. A targeted therapy clinical trial was testing a new molecule that had been shown to inhibit the growth of the abnormal protein expressed in my sarcoma. Targeted therapies are drugs that are designed to inhibit just a mutation, compared to standard chemotherapy, which targets full cells.

When I heard that I qualified for the trial, I was so happy that I cried like a baby. Because aside from this, there was nothing else the doctors could do for me.

What It's Like to Be in a Clinical Trial

It took about three weeks to fill out the paperwork necessary to enroll in the trial and find out whether the researchers felt that I was an appropriate candidate. My trial did not have a placebo arm, so I received the active medication. I took one pill a day. And since the medication was still being tested, I had to pick it up once a month from the pharmacy at Sloan Kettering, which is managing the trial.

For the first week on the pill, a nurse called me almost daily to see how I was doing and make sure I wasn’t experiencing any adverse symptoms, like changes in my weight or appetite. After that, the calls went down to once a week.

Being diagnosed with cancer myself has strengthened my resolve to advocate for clinical trials—no longer as a physician, but as someone with a vested interest.

I also had weekly office visits with my oncologist at first, which later became monthly check-ins. They confirmed I was tolerating the medication by checking for side effects and doing blood tests.

Every couple of months, I also had to go in for imaging—an MRI or PET scan—to determine the size of the tumor. Sometimes the office visits were an hour long, and other times I was there all day—if they were doing a pharmacokinetic study, for example, to see how my body was metabolizing the drug.

It was humbling to be on the other side of a clinical trial—as a patient. My physicians and nurses were very supportive and encouraging, and I realized I didn’t pay attention to that emotional aspect of things as much as I should have when I was a physician.

I was part of the trial for six months, and although the medication kept the tumor’s growth at a slower rate, it didn’t cure me. So my clinician and I have agreed that I should try a more aggressive treatment, like radiation.

I’m not out of the woods. I have some days when I’m pretty tired and weak. I had to take a leave from my job at Johnson & Johnson because I can’t walk—I use a walker and crutches—and I’ve had to apply for disability. I live with pain. But I also have the appreciation of seeing another day. So I write. I paint. I have a new normal.

It’s still likely that I’ll have to have some kind of chemotherapy in the future. But I don’t have to take it now, which is a big thing for me. I was so nauseous and dehydrated from not eating or drinking while on it that I had to be hospitalized on two occasions. With the promise of targeted therapies, perhaps someday chemotherapies may no longer be necessary. This is the advantage of genetic testing—it can help people with cancer see if there is a clinical trial that might help them.

The reality is that being diagnosed with cancer myself has only strengthened my resolve to advocate for clinical trials. We are on the brink of something very important and I’m a part of it—no longer as a physician on the outside looking in, but as someone with a vested interest.