"I Have Autism—and It's a Big Reason Why I'm Successful"

Share
For National Autism Awareness Month, Angela Andrews, a data manager at Janssen, shares her personal journey living and thriving with autism—and advocating for others just like her.
By Angela Andrews, as told to Darren FreiOctober 14, 2018
Today's Top Reads Close

"I've spent most of my life feeling like I’m standing in front of a bubble, and inside this bubble, everyone is beautiful and there's a big fancy party going on. They're laughing and having a great time, but I'm standing outside in the dark in the rain, with my face pressed against the bubble because I can't learn the rules that would let me come inside."

"My job is to help make sure that our data is as clean as possible because patients' lives are on the line," Andrews, 40, explains. "If the data is not as close to perfect as it can be, the results could put someone at risk. I take that very seriously, and my autism helps me be very good at it."

Andrews shares how she came to appreciate her autism—and why she believes having a neurodiverse workplace that embraces "someone to be who they are, no matter what that form takes" can be a formula for success.

Angela Andrews: "Autism is considered an 'invisible' disability because the signs and symptoms are not physical and not always obvious. Yet someone with autism may also need additional help or accommodation—just as those with visible disabilities sometimes do.

Having said that, I prefer to think of autism as a difference, rather than as a disability. There are certainly parts of autism that can be disabling, especially if you don’t get the right treatment, but there are also many talents that can come with it.

But I didn’t always feel this way.

“Teachers Used to Tell Me I Was Dumb”


My childhood was very difficult. I didn’t pick up on social rules. I was what people would refer to as 'inappropriate' because I’d walk into random people’s houses to talk to them.

In fifth grade I had a teacher who openly mocked me. When I got a good grade once, she took me to the principal and accused me of cheating, saying, 'Angela’s too dumb to do that well.'

What most people, including my family, didn’t understand was there was a logic to much of my behavior.

My parents would get angry because I destroyed many of my clothes, but I have sensory issues and find many things to be incredibly abrading—and even painful. This can include noises, lighting, weather and even certain fabrics. If I destroyed clothes that were too scratchy or fit too tight, I wouldn’t have to wear them. So that’s what I did. But my parents didn’t understand this.

I had a lot of testing as a child. I can’t be certain that I was diagnosed, but I suspect my mother was told I had autism and hid it from me. She was angry because there was something different about me, and instead of accepting that, she just pounded into my head that I needed to 'be normal.'

After years of being punished for just being myself, I felt I was broken—and that it was my fault. At 21, I was hospitalized after a failed suicide attempt, and someone at the hospital recommended I be tested. I was initially diagnosed with Asperger’s syndrome, which is on the autism spectrum, but I rejected that assessment. Being 'normal' was still the goal, so I insisted that nothing was wrong with me.

But as I had children, I started to notice that one of them had severe sensory issues—no verbal ability, no eye contact—and two others were subsequently diagnosed with Asperger’s. It was also during this time that my first marriage ended, and I dropped out of college because I wasn’t prepared to manage my symptoms.

It was a difficult time, yet as I learned more and more about Asperger’s and autism to help my kids, I kept running into the fact that the behaviors and issues sounded very much like things I'd been dealing with my whole life. I went in for a re-diagnosis when I was 27, and the doctor told me I had autism. This time, I was more ready to hear it.

“Why My Autism Diagnosis Was a Blessing”


Finally knowing I was autistic enabled me to seek out workarounds and learn how to manage certain behaviors. Instead of rocking back and forth in meetings, I replaced the behavior with something that’s more socially acceptable, like bouncing my pen or tapping my feet instead. It seems like a simple thing, but it makes a big difference.
I also remarried, and with my new husband's encouragement, I went back to college at 31. As I was working on papers and projects, I discovered I loved data—and my professors saw I was good at it. I also read extremely fast, and have a great memory, which helped give me an advantage.
Share expand 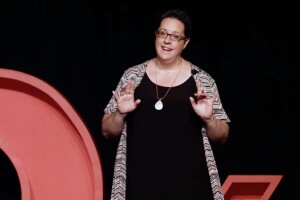 Andrews gives a talk about autism at a Johnson & Johnson event

As I started succeeding, I realized I wasn’t stupid, dumb and worthless—I was actually great at a lot of things. Eventually, I got a master’s degree in data analytics.

Unfortunately, there were still places where I was bullied in the workplace. But several people noticed what was happening and took me under their wings and helped make sure management knew my situation—and that I was doing my job well.

In fact, one of those people ended up being the person who hired me for a supply chain job at Johnson & Johnson. That was three years ago, and since then, I've been promoted twice. Earlier this year, I moved into my current role at Janssen Research & Development.

Most people would probably find my work boring, but for me, it’s all about patterns—and that’s what I love about it. My brain is structured differently, which tends to be really helpful. If I’m looking at a large data set and something is amiss with the pattern, I can pinpoint it quickly; I don’t need to read every single line of numbers to find the problem. Since I’m able to pick things up quickly, I’ve also been able to become a translator between people who speak technical, like me, and people who speak business.

Last year, I was able to take on a complex project for the company and transform work that frequently took hours to do into something that took far less time. I am now asked to train other departments on how to do the same thing.


I am very proud of Johnson & Johnson for the research and work they're doing to improve the lives of those with autism, as well as their families and the community.

But I'm even more proud of the company's efforts to assist those with autism who are either working at the company or would like to. I think Johnson & Johnson is a natural fit for people with autism because they tend to gravitate toward the sciences and math, and we’re a scientific company.

Johnson & Johnson is also, by far, the best company I’ve worked for when it comes to acceptance of people with autism. A few months ago, I gave a talk at the company about being autistic, and the outpouring of support has been incredible.

Since then, I've also had people come up to me and tell me they’re autistic, too. But when I asked them if they'd self-identified with their manager, they said, 'No, I’m too scared.'

I want to help change that. I started an autism employee resource group to encourage people to stand up and own who they are. I’m also encouraging others in the company to not make generalizations about what being autistic means and accept each person on their own terms.

For example, it’s a common belief that making eye contact is a good sign of employee interest and engagement, but not everyone feels comfortable looking someone directly in the eye. If an employee is fidgeting during a meeting, don’t assume they’re distracted—they may just physically need to move a bit in order to focus.

I also volunteer with the local school district, have given talks to community groups and volunteer to help teach people how they can be more accepting of neurodiversity.

I believe if you really allow people to be who they are, allow their brains to go where they can go, there’s no limit to what can be accomplished." 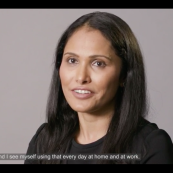 What Diversity Means at Johnson & Johnson
The company's mission: to make diversity, equity and inclusion its way of doing business, and to ensure all employees know they belong.
Learn more
Explore Careers
Explore Careers
Language
Language