am originally from the Benin Republic in West Africa. My parents had four children, but I also grew up with a lot of cousins—many of my aunts and uncles sent their children to our house and because there were so many mouths to feed, if you weren’t home in time to eat, the food would be gone and you’d stay hungry. But it became a part of life and taught me survival skills.

I graduated from college in 2005 with a business degree, but there were no jobs in Benin. At the same time, my long-term girlfriend wanted us to move to the U.S. to study. She went first, and I followed six months later.

When I landed in Detroit in April 2006, I expected my girlfriend would be there to meet me as planned. I called and called, but she never answered. I was scared and confused and didn’t know what to do, so I reached out to the school where I was planning to study English. The school helped me find a place to live, and I began my classes.

The last time I spoke to my girlfriend before I left Benin, I told her I would have to work in the U.S. to support myself. I think she thought my father would support me. I had believed that if you’re in love and work hard, even if times are tough, you can do anything. But I don’t think she believed that. I never heard from her again.

The money I brought with me lasted six weeks, and then I was homeless for a time. I took showers at the local YMCA, and looked for any work I could find. Two months after I left Benin, my dad had a stroke and I had to pay his medical fees, as well as tuition for my brothers and sister. Fortunately, I found jobs as a dishwasher at two restaurants. I would work from 6 AM to 3 PM, go to school to learn English and then go to the other job from 6 PM to 2 AM. I did that for five years, so I could send money home.

By 2011, I was sick of the life I was living. I knew I wanted to get into computer science, so I enrolled in classes at a local community college and got my degree in 2014. While in my last year at school, I got a call from a recruiter asking if I wanted to interview at Johnson & Johnson for a job in Ann Arbor, Michigan, near my college. I was a beginner, but they took a chance on me and offered me a contracting job.

By the end of that year, they offered me a full-time position as a system engineer in the Health & Wellness division. In 2016, I transferred to the company's Raritan, New Jersey, location to take a job as an IT/AS software engineer.

Giving Back in Benin With CodeToHope

After so many years of struggle, I had turned into a hard-hearted man and had developed a selfish mindset—I felt it was my time to come first. But everywhere I looked at work there was a Johnson & Johnson Credo on the wall, describing our responsibilities as employees to others, such as supporting the communities in which we live and the larger world community.

I learned that the Credo is a very contagious thing. I’m proof of that, as I soon found my focus shifting from myself to other people. Part of that was because I was being treated in a different way. My supervisor actually cared about me, my family and my well-being—both emotional and financial.

That really changed me, but I didn’t know just how much until December 2014, when I went back to Benin for Christmas and all I saw was poverty. I knew there was no way for me to be happy when everyone around me was unhappy. So my mom and I bought 500 toys and took them to two orphanages. We also catered food for Christmas and New Year’s Eve at the orphanages—and have been doing so ever since. 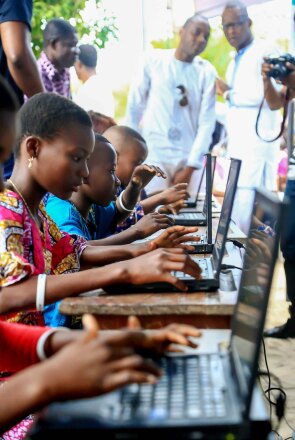 Children at a primary school in Sohon, Benin, show off the computer skills they learned through CodeToHope training

A year later, in December 2015, I went back to Benin and saw the same issues. That’s when I realized the main problem was lack of education. Most of the people around me hadn’t gone to school. Their children didn’t go to school. In 20 years, their children’s children wouldn’t go to school. I thought, Instead of just handing out toys, I should invest in computer education. Sure, education doesn’t guarantee that you’ll be rich, but it will give you better opportunities in life.

And that’s when my passion project, CodeToHope, began.

When I returned to the U.S. in January 2016, I began buying gently used computers. By the end of the year, I took 15 to a village in Benin to give to a local school. Then I realized that the teachers and even the director of the school had never seen computers before, so I hired an IT professional from a nearby city to teach both the children and the educators basic computer literacy.

Mike Reilly,Vice President, Application Services, Johnson & Johnson, Vice President, Application Services, Johnson & Johnson, about CodeToHope. At the time, it was a tiny thing. But he got very excited. “How many computers do you have?” he asked. I told him 15, and he said, “You need to think bigger. You need to think 100, 200 and even 300 computers. Set a big goal.” That pushed me into an uncomfortable area, but I’m glad he did.

Mike then connected me with Guillermo Ardon

Guillermo Ardon,Chief Applications Officer, Johnson & Johnson, Chief Applications Officer, who offered to be a corporate sponsor for my program and helped us secure $20,000 to expand our efforts. CodeToHope is now a 501(c)(3) charity, and we are also part of Johnson & Johnson’s Click to Care program, in which the company matches charitable donations made by its employees. Other colleagues have donated their own computers and given money. So far, we’ve donated 36 computers to three schools, which are shared by 1,500 students.

Going forward, my goal is to donate 500 computers per year and raise $50,000, so our operation can reach countries such as Cameroon, Botswana and Niger, as well as Latin America.

When people ask why I decided to do this, I say Johnson & Johnson is the reason. I do this because the company inspired me to help make the world a better place.

My Future Hopes for CodeToHope

Recently, I and two other volunteers from Johnson & Johnson paid our own way to Benin to get a sense of the impact of our contributions. We had more than 750 people show up to thank us—and I was personally overwhelmed to see this. They understood that because of what we’re doing, their children might not have to suffer like they have.

In December 2016, I asked students to type one sentence on a donated computer—it took them 20 minutes each. Eight months later, the same students pulled together a full PowerPoint presentation—with pictures—in 20 minutes. That blew my mind.

4 Ways Johnson & Johnson Is Leading the Fight Against Cyberattackers

Not only are the students progressing and feeling more confident, but there has been a 30% increase in their school attendance—and 40% of the students are doing better in other classes because the teachers are using computer time as an incentive to get them to do their other work. Plus, more parents are pushing their children to go to school, rather than having them leave school to fish or farm. 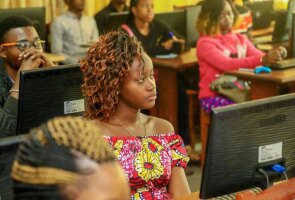 Students at a university workshop in Cotonou, Benin

We have many goals for CodeToHope. For example, we currently have our sights set on an area in Benin called Ganvie, a fishing village that sits on Lake Nakoué. The entire village is built on stilts surrounded by water. I want to set up an IT center in the local school, get a generator, and bring in 20 computers to help better educate the students and give them more opportunities.

But beyond simply building computer literacy, we are giving children the tools and the training to become community leaders. We are helping change the mentality of waiting for someone else to come in and fix local problems with donations of food or buildings, and instead, are supporting these students so they can ultimately find solutions themselves.

We are also holding workshops at local universities. During our most recent trip to Benin, one of my colleagues gave a full-day class on software development. I’d like to create a program where any of our volunteers could come to help teach once or twice a year.

Another potential project is something Mike Reilly would like to see happen—a sponsored internship program where Johnson & Johnson brings several people from Africa to work in the U.S. in management or IT so they can then take their gained knowledge back to help create solutions for problems in their home country.

There is so much to be done but, at 34 years old, I consider it a calling and a duty to push ahead with CodeToHope. It makes me feel as if I have a purpose. And I guarantee that in 10 to 15 years, when we see the fruits of all of our work, it will be amazing.

When people ask why I decided to do this, I say Johnson & Johnson is the reason. I do this because the company inspired me to help make the world a better place. 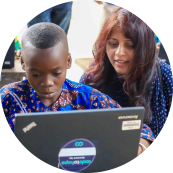