Share
It was an historic initiative: train healthcare workers across China in neonatal resuscitation—from big cities to remote villages. Ten years later, over 150,000 newborns are alive because of it. We go behind the scenes to explore the secrets of the program’s success.
By Justin BergmanOctober 05, 2016
Today's Top Reads Close
F

or an expectant mother, one of the most frightening things that can happen during labor is to give birth—and then hear nothing. No tiny being whimper, no I’ve-entered-the-world wail.

For Jia Qiuwan, it happened not once, but twice.

When Jia gave birth to her first son, Binyang, nearly 10 years ago, he wasn’t able to breathe on his own. There was no cry. But even if there were, she wouldn’t have been able to hear it. As doctors rushed to successfully resuscitate her baby, the new mom slipped into a coma and didn’t come to for a half hour.

When Jia was admitted to the same hospital—the Hongsibao Maternity & Child Health Hospital, in the Ningxia region of western China—to give birth to her second son in late 2014, she was hoping for a much easier delivery.

“The doctors said my baby was asphyxiated,” Jia recalls. “I didn’t hear him crying.”

This time, she was conscious—and instantly worried. But thanks to her experience giving birth to Binyang at the same hospital, she trusted the medical staff. “I knew this hospital was really good at saving babies,” she says.

After what seemed like an eternity, she finally heard the sound she’d been waiting for: the wail of her newborn son, Ruiyang.

A Unique Global Partnership to Help Solve a National Crisis

Each year, one in 10 babies around the world—that’s about 10 million newborns—suffers from birth asphyxia, or the inability to take that first life-sustaining breath on their own. If a baby can’t be resuscitated within that crucial first minute post-birth, and an adequate amount of oxygen doesn’t make it to the brain and other organs, it can lead to cerebral palsy, developmental disabilities, organ failure and even death.

The problem is especially pronounced in developing countries. Just a decade ago in China, the chances of Ruiyang and Binyang surviving birth asphyxia were much slimmer. In the early 2000s, asphyxia accounted for about 20% of all newborn deaths in the country. That’s an astounding 73,000 babies.

Baby’s First Breath: How One Landmark Program in China Has Saved 150,000 Newborns

In the face of such grim statistics, Chinese health officials knew that bold action was necessary. So, in 2004, a first-of-its-kind public-private partnership was formed between the Chinese government (including its Ministry of Health and the National Center for Women and Children's Health, China CDC), Johnson & Johnson and such professional associations as the American Academy of Pediatrics and the Chinese Nursing Association to enact sweeping change on a national level—the only way birth asphyxia deaths could be reduced in a substantial way.

The initiative, known as the Neonatal Resuscitation Program (NRP), aimed to ensure that at least one medical professional skilled in neonatal resuscitation was present at every hospital delivery throughout the country.

In 99% of Chinese hospitals, midwives are responsible for delivering babies and monitoring mothers post-birth—not obstetricians.

“Because birth asphyxia was the leading cause of newborn deaths in China, we decided to address this challenge together. We discussed many options that would not only fill gaps in the country’s healthcare system but that were also important to the government,” says Joy Marini

The initiative would require implementing a neonatal training program the likes of which had rarely—if ever—been attempted on such a large scale, involving thousands of hospitals and healthcare providers in 31 provinces, municipalities and autonomous regions, from Heilongjiang in the far northeast to Tibet in the west.

But it was a cause clearly worth pursuing. Qiu Yinping, M.D., remembers well what it was like to try and save a baby born with asphyxia before the training program came to Ningxia, an autonomous region in one of the poorest and most remote parts of China.

“We used mouth-to-mouth resuscitation or the pat-the-back method,” says Dr. Qiu, the chief physician and pediatric department director at the Ningxia Medical University Hospital. “Then we’d get the bag valve mask [one of the tools for which the NRP now provides training]. But we didn’t have a good understanding of how to use it. We’d only think about using it if we really had no idea what to do.”

Putting an Ambitious Plan in Place to Train Caregivers Across China 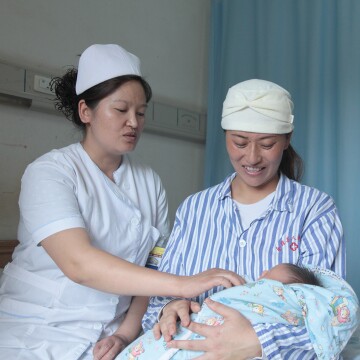 A hospital midwife in Liangshan, China, congratulates a new mother.

Given the complexities of setting up a training program for thousands of healthcare providers—some of whom worked in hard-to-reach rural areas—the NRP stakeholders devised a top-down approach.

Step one was to form a national team of about 10 experts who received training in neonatal resuscitation by professionals from the American Academy of Pediatrics. That national team was then sent to teach the techniques to health officials, pediatricians, obstetricians, nurses and midwives at the province level. They, in turn, trained county and city teams who were then dispatched to the countryside to teach healthcare providers in Chinese villages.

The National Center for Women and Children's Health was responsible for running the program, while Johnson & Johnson provided seed funding for things like training national-level leadership and providing technical support to monitor and evaluate trainers.

Despite the sheer enormity and massive scope of the plan, Wang Huishan, M.D., who was director of child health at the National Center for Women and Children's Health at the time, was confident in its success.

“I didn’t worry,” explains Dr. Wang, who has since retired but still serves as a consultant on other programs for the agency. “We’d done projects at a big scale before, such as a national early childhood development project. Although the NRP project was a little bit bigger, we had support from China’s 31 provinces and regions, and I had a team to move this project forward.”

That’s not to say that implementing such large-scale systemic change didn’t come with its challenges. Wang Lixin, who was head of the obstetrics and gynecology committee at the Chinese Nursing Association when the program began and became a national-level trainer, says that in the early days of the initiative, very few midwives were taking part in the training.

But training midwives was, in fact, crucial to the program’s success. In 99% of Chinese hospitals, midwives are responsible for delivering babies and monitoring mothers post-birth—not obstetricians.

“Some hospitals once thought resuscitation was a task only pediatricians and obstetricians should do,” she says. “But we explained to them that midwives were actually the most important [people to train] because they first discover the asphyxia problem and call for the doctors. They are the first people babies meet.”

Fast forward 10 years and the NRP courses are now so popular among midwives that when national-level trainers hold monthly sessions across the country, they sometimes have 80 to 100 people turn up for a class intended for just 50. This demand is one of the key reasons why Chinese health officials and Johnson & Johnson decided to extend the program for another five years after the original 10-year partnership ended in 2014.

Another hurdle the program’s trainers faced was figuring out how to help healthcare providers let go of entrenched habits. Specifically, participants would perform well in NRP training sessions—but then revert to old resuscitation methods once back home.

“Performing this training is not as easy as you might think,” says Dr. Qiu, who was one of the original trainers in Ningxia. “It is not simply about delivering a lecture, and giving a hands-on demonstration. For many medical staff who went through the training, it was very hard for them to change their old ways during actual deliveries.”

And as Wang Lixin notes, there is sometimes a need to support midwives with follow-up training to ensure that they don’t revert to old methods. “We have to reinstruct and emphasize again and again,” she says.

But the repetition has paid off: In the first five years of the program, every relevant health provider in all of the hospitals in Dr. Qiu’s district received training, which she says has saved the lives of “countless” babies.

“When I hear some of my trainees talking about how they performed a resuscitation, saved a child’s life, and how this child has grown up healthily, I am very happy,” she says, “And the trainees’ happiness can be seen in their expressions. The program has brought them confidence.” 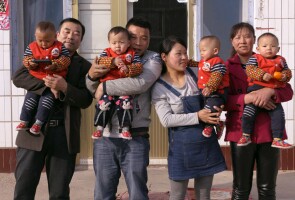 The Shen quadruplets, now home in Ningxia, China, are poster children for the neonatal resuscitation program.

Today, it’s clear that the landmark program’s success has been staggering by every metric. The government estimates that 250,000 healthcare providers have been trained in neonatal resuscitation in 95% of hospitals across the country. And the birth asphyxia mortality rate in China has seen a 70% reduction.

The program has led to fundamental changes in national healthcare policy, too. Neonatal resuscitation techniques are now included in textbooks used at medical schools and universities across the country, and most provinces now require training in the techniques as part of the certification process for midwives, nurses and obstetricians to work in delivery rooms.

“At the beginning, we just expected to have at least one NRP-trained healthcare provider at every delivery,” Dr. Wang says. “But now nearly all midwives have received our training.”

And the NRP trainers have managed to keep pace as hospitals have gotten dramatically busier since the program’s inception.

At Dr. Qiu’s hospital in Ningxia, for example, deliveries have more than doubled in the past decade to 2,500 annually, while infant mortality rates have declined sharply. “In the second five years of the program, we rarely encountered any newborn mortality,” she says.

Dr. Qiu recalls using the resuscitation techniques herself during a particularly difficult birth in 2014: a set of quadruplets, born at just 30 weeks. Working quickly under high-stress circumstances—the babies were arriving in one-minute intervals—she and her team successfully resuscitated two of the newborns.

Freedom of Breath, Fountain of Life: How a First-of-its-Kind Partnership Has Saved Thousands of Babies in China

“It is hard to imagine what would have happened if we had not been through this training program,” she says. “We probably would have lost these two children.”

But nothing quite conveys the impact that the program has had than this figure: 150,000-plus children have been saved. Children like Jia Qiuwan’s boys, who are both happy and healthy.

As his mom describes him, Binyang is a clever and disciplined 9-year-old boy. “He formed this good habit from kindergarten of doing his homework as soon as he arrives home,” she explains.

Ruiyang, meanwhile, is more of a handful, she says with a laugh. Now 19 months old, he has an insatiable curiosity—so much so that Jia has to have one eye on him at all times. “He cannot sit still unless he’s sleeping,” she says.

“Our hard work has produced great achievements,” Dr. Wang says. “We should celebrate the efforts made by all our staff members for the safety and health of newborns.”