A guiding mission at the Johnson & Johnson Family of Companies is to care for the world, one person at a time. But there’s another part of that mantra that’s also important: Care for the world—one product at a time. 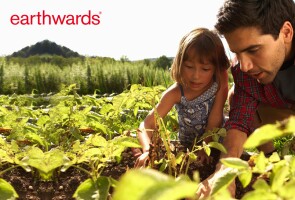 As a global health care company that produces products spanning everything from skin care to medical equipment, it’s vitally important to ensure that the company’s products not only benefit people the world over—but also that those same products are more sustainable than ever.

From Earthwards® news to a new Wipe For Water campaign, here’s a look at four company initiatives that helped make the planet a healthier place in 2015.

In 2009 Johnson & Johnson launched its Earthwards® program, which is designed to promote sustainable product development. If a product achieves at least three significant sustainability improvements across seven designated impact areas, it has the opportunity to achieve Earthwards® recognition.

Through 2015, 80 products companywide, representing over $9 billion in revenue for Johnson & Johnson, achieved that recognition. 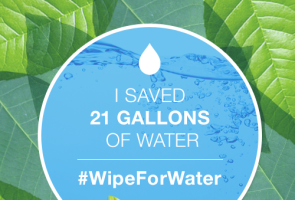 Some notable products that achieved Earthwards® recognition in 2015: Aveeno Ultra-Calming® Nourishing Night Cream, which cut waste by reducing shipper packaging by 66%, compared to Aveeno Ultra-Calming® Reconditioning Night Cream. And the ATTUNE® Knee INTUITION™ Instruments line, made by DePuy Synthes Companies, reduced energy consumption by 22% and water use by 22% during its sterilization and disinfection process at hospitals, compared to SIGMA® HP Instruments.

“We’re in a very exciting place right now with Earthwards®, building off the momentum we gained in 2014 by achieving our goals ahead of schedule, and setting even more aggressive ones for the next five years,” says Al Iannuzzi, Senior Director Environment, Health, Safety & Sustainability. “By 2020, Johnson & Johnson is targeting for 20% of its revenue to come from more sustainable products that have achieved Earthwards® recognition.”

Conserving Water With a Simple Wipe

The premise was simple: People were challenged to skip washing their faces with water for a week—a daily act that can use up to five gallons of water—in favor of using Neutrogena® Naturals Purifying Makeup Remover Cleansing Towelettes.

The result? The campaign reached more than 13 million consumers via social media alone. 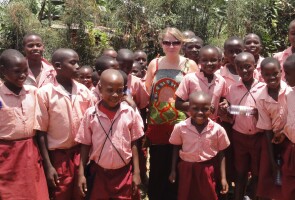 Sealfon poses with a group of schoolchildren in Rwanda

“The mission of Johnson & Johnson is to help people live longer, healthier and happier lives, and Our Credo defines our sustainability practices and responsibility to the community,” says Simon Geraghty, Senior Manager, Neutrogena®. “As a company based in drought-ridden California, we wanted to get the conversation started about water footprints, and this social cause campaign was a fresh way to bring awareness to water conservation and tie back to our mission.”

The pair spent one week in Rwanda working alongside the nonprofit Sustainable Health Enterprises (SHE) to educate local villages on how to manufacture sustainable sanitary napkins, a product that’s in scarce supply in many developing countries. 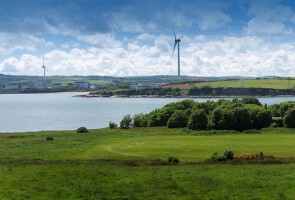 “Without access to affordable napkins, girls and women in these countries might miss up to 50 days of school or work each year,” says Moscherosch. “If we are successful in Rwanda, our ultimate mission is to develop a financially viable, scalable business model to manufacture affordable sanitary napkins in other underserved regions of the world.”

There’s an added boon to the local communities: In addition to creating jobs, the program will also help support farmers whose banana fiber is instrumental in making the napkins.

In 2000 Johnson & Johnson established its first enterprisewide commitment to reduce carbon dioxide emissions—and it’s now committing to lofty new energy and climate goals in 2015: Reduce absolute carbon emissions by 20% and produce and procure 20% of electricity from renewable resources by 2020, as well as power all facilities companywide with renewable energy by 2050.

As of Richardson’s post, the company was already on its way to achieving those goals, thanks in part to the implementation of new, more energy-efficient infrastructure at facilities in Ireland, the U.S. and Puerto Rico.

And last September Johnson & Johnson took its commitment a step further by becoming the first health care company to join RE100, an initiative in which companies pledge to move toward using 100% renewable energy.

"It is inspiring to know that we are all working toward this collective goal," says Richardson. "The companies in RE100 are from very diverse industries, but we are all linked by this common issue of climate change. Together, we have much more influence and buying power to effect change."