Johnson & Johnson and Chinese company Legend Biotech have teamed up to work on a new form of treatment for the incurable blood cancer. We interview Dr. Sen Zhuang about the unique collaboration—and the promise it holds.
By Jessica BrownSeptember 08, 2018
Share
Share
Today's Top Reads Close
T

he early data results seemed almost too good to be true.

An emerging Chinese biotech company called Legend Biotech was presenting the initial results of their investigational chimeric antigen receptor T cell therapy (CAR-T), a type of treatment that harnesses a patient's own white blood cells to target and kill a specific form of cancer, multiple myeloma—a disease that Johnson & Johnson is focused on defeating.

Fifteen years ago, doctors had few options beyond chemotherapy and radiation to manage the disease, and patients typically only lived for two or three years following diagnosis. But thanks to new treatment options, life expectancy has risen: Over 50% of people diagnosed with multiple myeloma today may live an average of over seven years.

Janssen, a member of the Johnson & Johnson family of companies, has been a leader in advancing the field of multiple myeloma research.

Now it has teamed up with Legend Biotech, through a worldwide collaboration and license agreement, to jointly develop and commercialize a CAR-T therapy based on Legend Biotech's novel cell therapy. "The partnership is a significant step forward in potentially bringing [a new treatment] to patients worldwide," says Yuan Xu, CEO, Legend Biotech.

For World Cancer Day, we share Dr. Zhuang's insights on the challenges of treating multiple myeloma, how the collaboration with Legend Biotech came to be—and why Janssen is so committed to further developing this CAR-T therapy.

Despite advances in treating multiple myeloma, it’s still considered very difficult to manage. Why is that?

When you’re treating multiple myeloma, relapse is the rule. While there has been progress in lengthening remission time with new therapies, nearly all patients will relapse or develop resistance to these treatments eventually.

Right now we can shrink tumors or delay them from getting worse, but these therapies are not curative. Every year in the U.S., over 30,000 patients are diagnosed with multiple myeloma, and over 11,000 patients will die from the disease.

So we desperately need something new to offer to patients.

How did Janssen’s collaboration with Legend Biotech come to be?

When Legend presented the early results of their therapy, called LCAR-B38M, at ASCO last summer, we were immediately impressed.

As I watched the presentation, I started getting texts saying basically the same thing from other Janssen colleagues in the audience—that we needed to take a closer look at this therapy because the data was quite promising. 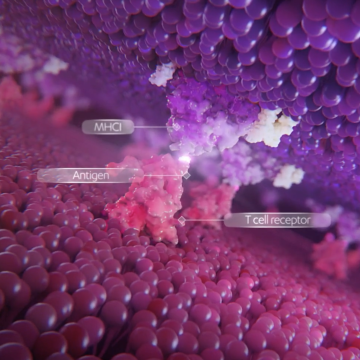 A molecular view of the CAR-T therapy at work

After it was over, I happened to see two of the Legend researchers in the hall. I went up to them right away to congratulate them and said, "I don’t know what your plans are, but if you’re interested in a development partnership for LCAR-B38M, I don’t think you’re going to find a better partner than Janssen."

We officially entered into a strategic partnership last December, just six months after the ASCO presentation.

While our collaboration did come together fairly quickly, we had a number of meetings and data reviews with Legend Biotech that ultimately led to this development.

Considering that we spend every day looking for new treatments for multiple myeloma, we’re excited to now develop this investigational immunotherapy in clinical studies designed to assess its efficacy and safety.

I have had the opportunity to see the potential difference the therapy can make in one man who had the treatment. I keep a picture of him in my office to remind myself there’s real meaning to what we’re doing.

CAR-T therapy is a very new type of immunotherapy. There are currently only two approved CAR-T therapies for the treatment of leukemia and lymphoma in the U.S. and Europe.

How it works is you extract T cells—one of the most powerful components of the immune system—from the patient and engineer them to attack tumor cells, then reinfuse them into the patient.

What's unique about JNJ-68284528 is that it binds to two sites on BCMA, a protein that is highly expressed on myeloma cells. The hope is this therapy will lead to longer remissions for those who aren’t responding to other therapies.

What could a therapy like this potentially mean for people with multiple myeloma?

What’s special about this treatment is that it’s "one and done"—you undergo the therapy once. Currently, despite the improvements seen in survival rates in the past several years, patients must adhere to taking their treatments for a long time.

I have had the opportunity to see the potential difference the therapy can make in one man who had the treatment. I keep a picture of him in my office to remind myself there’s real meaning to what we’re doing.

JNJ-68284528 is an investigational therapy and is not approved for use. For more information about Janssen’s pre-approval program, click here.