Share
Some of the most innovative cancer treatments start out as small but eye-opening epiphanies in the lab. Meet four oncology researchers whose eureka! moments might just one day save your life.
By Ginny GravesOctober 05, 2016
Today's Top Reads Close
O

ne of the biggest health battles the world’s scientists are waging is against cancer. And it’s not just one epic skirmish, either. A disease like lung cancer alone can have numerous subtypes, so we’re talking about many battles being waged—on many different fronts.

That’s why the hundreds of scientists who work for Janssen Oncology worldwide focus their research on three forms of cancer for which a need for new treatments is particularly great: prostate, blood and lung. This way, their innovations and collaborations have the potential to make a greater impact than if they were studying many diseases at once.

And when it comes to cancer research, even small breakthroughs could someday translate into healthier futures for countless people living with these life-threatening diseases. Call them “Aha!” or “Eureka!” moments, but it’s that light bulb experience when you realize you’ve just landed on something amazing.

So we asked four oncology scientists to share some pivotal “Aha!” moments of their Janssen careers—the epiphanies that are helping to change the game when it comes to cancer treatment. 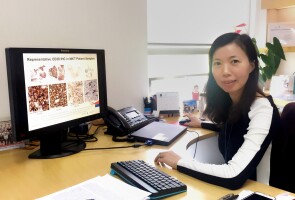 “NK/T cell lymphoma is a rare and very aggressive form of cancer that often affects the nose and sinuses, and for reasons we don’t yet understand, it’s more prevalent in Asian populations. If the illness is caught early, it’s often treatable. But if a patient relapses after first-line treatment—the first, best available treatment for a disease—we don’t have effective therapies for it. The disease can be so aggressive that life expectancy for these patients is only a few months.

In other words, there’s a critical need for a medication that can help these patients—and our team recently realized there was a drug already on the market that might do that.

We discovered that that drug is able to decrease the population of the same kind of cells involved in the cancer we were working on, so we believed it might work for our patients, too.

If just 10% or fewer of the patient samples expressed the surface marker required for the drug to function, it might be a challenge to conduct a clinical trial. Fortunately, we found the majority of their samples—more than 80%—had very strong expression of these markers on their cells’ surface.

This was a huge moment for our team because it means there’s a chance this medication will help NK/T lymphoma patients. We’ve just finalized a protocol for a clinical trial, and the first patient could be enrolled in the next few months.

I’ve seen NK/T lymphoma patients in the hospital fighting every day for their lives, so if we can do anything to help, it will be extraordinarily rewarding.” 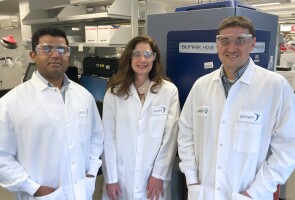 “The medical community has long grappled with a prostate cancer problem: how to accurately determine high-risk cancer from intermediate- or low-risk disease. The way we’ve done it for years is to look at the clinical characteristics, or features, of a patient’s tumor, but that approach isn’t always accurate.

A number of patients who are put in the high-risk category actually have low-risk disease, and because they’re misclassified, they end up going through unnecessary surgeries and treatment. At the same time, some patients with high-risk disease are put in the low-risk category, and as a result, they aren’t treated aggressively enough, giving the cancer time to metastasize. So there’s a real need for better ways to determine risk level for each patient.

A number of different approaches have come out in recent years that focus on looking at the molecular make-up of a tumor, rather than the clinical characteristics. So we set up a study to test whether these molecular classifiers might be better at identifying high-risk prostate tumors. We found one, in particular, that can reclassify about 40% of tumors as high-risk that the clinical method deems intermediate-risk, and about 60% of the so-called high-risk tumors as intermediate risk.

This was an exciting moment because it could give us better information on how to identify high-risk patients for more aggressive treatment. So the next step is to start using the molecular classification system in clinical trials. We expect this could one day replace the clinical classification system, and if that happens, it has the potential to save more lives. About 27,000 men die of prostate cancer each year in the U.S. If we can help reduce that, it would be awesome. That’s what we’re striving for.”

“Our Research Might Lead to a Novel Immunotherapy Treatment for Lymphoma” 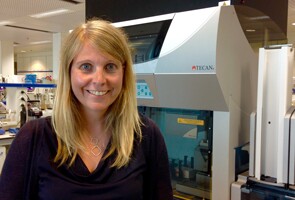 “An estimated 20,000 people will die of lymphoma in the U.S. in 2016. Currently, there are successful immune-based treatments that are effective for about 50% of patients. These therapies are based on T-cells, a type of immune cell that attacks and kills cancer cells. But that still leaves a high percentage of patients who don’t respond to that approach.

In our lab, we’d been trying to employ another type of immune cell that uses a different mechanism of action than T-cells, and eventually we hit on one that seemed promising. We needed to test it in laboratory mice built with human, rather than mouse, immune systems—a type of mouse model that’s difficult to create.

We used mice that had been bred without immune systems of their own, and then injected them with human cord blood stem cells—the type of stem cells that make immune cells. Once the mice had functioning human immune systems, we injected human lymphoma cells into their bodies. Then came the big test: Would they respond to our prototype immunotherapy treatment?

The answer was yes.

Our preliminary data show that by using this different type of immune cell, we can kill cancer cells. Next we need to repeat the studies, look at the potential side effects, and if things continue to look good, move on to human trials.

I feel very lucky to be in this field right now: There are so many advances, particularly in immunotherapy, that have the potential to affect people’s lives. These are the types of breakthroughs that motivate me to keep working hard every day.” 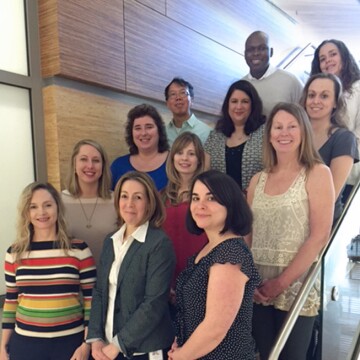 “Chemotherapy drugs are non-specific: They kill any cell that’s dividing—healthy cells, as well as those that are cancerous. But now, by looking at different molecular markers on the tumor cells themselves, we’re finding ways to develop treatments that affect only cancer cells—and that’s led to some wonderful ‘Aha!’ moments.

A recent one for our team occurred in the realm of prostate cancer. A protein called prostate-specific membrane antigen (PSMA) is found at high rates in prostate cancer cells, but rarely in normal cells. We knew that if we could find a way to get the immune system to target PSMA, we’d hit a high percentage of cancer cells—but that’s been somewhat difficult to do.

Eventually, we discovered a type of molecule, known as a CD3 redirection molecule, that binds with PSMAs, as well as cancer-fighting T-cells. So we gave lab mice with prostate cancer a treatment based on the CD3 redirection molecule, and we were thrilled with what we saw: In some cases, we were able to halt the progression of tumors—even melt them away. When we looked at the tumors under a microscope, we saw tons of T-cells and very few tumor cells left. As a scientist, when you see something like that, it leaves you speechless.

This work is only in preclinical mouse models, so we don’t know how it will behave in people, but I’ve been working in this area for more than a decade and we don’t see very many agents in mouse models that hold this kind of promise. This form of therapy has the precision of a surgical knife because it attacks the cancer cells, but leaves healthy cells unscathed.

If this molecule works the same in people as it does in mice, it could be a paradigm-breaker. I’ve had friends die of cancer, so I’m grateful to have the privilege of working on research that might one day help other people affected by these diseases live healthy lives.”