Share
For International Polar Bear Day, we're sharing the heartwarming story of a plucky and beloved bear who benefited from a company donation of medical supplies for a challenging surgery.
By Linda LombardiFebruary 27, 2019
Today's Top Reads Close

Nora the polar bear is just 3 years old, but she has already faced a host of challenges.

Six days after she was born at Ohio’s Columbus Zoo and Aquarium in November 2015, Nora was abandoned by her mother and had to be hand-raised by zookeepers. Cubs in human care only have a 50% survival rate in their first few weeks of life, but Nora pulled through—and even gained an impressive fan base along the way. 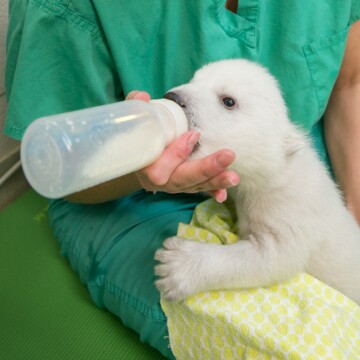 Videos posted online by the zoo—showing the tiny, spirited cub feeding from a bottle and learning to walk—went viral, and Nora soon had supporters across the country rooting for her. One adorable clip has racked up more than 1.2 million views on YouTube.

In 2016, Nora moved to the Oregon Zoo, where zookeepers hoped she would bond with a senior polar bear named Tasul. Sadly, Tasul died shortly after Nora arrived, so in September 2017, she was transferred to Utah's Hogle Zoo and paired with another young bear named Hope.

Nora seemed to be thriving in her new home—until January 24, 2019, when zookeepers noticed that the normally inquisitive and playful bear wasn't moving around in her enclosure. Nora had broken her humerus—the long bone between the shoulder and elbow—likely due to rough play.

Dr. Watkins agreed to perform the surgery, but with some trepidation—he had no experience with bears. However, he says, 'You have to be willing to go into the unknown and adapt. That's part of being a veterinarian.'

Nora’s caretakers began looking for experts who could help mend her broken bone and found Jeffrey Watkins, DVM, DACVS, professor of large animal surgery at Texas A&M University College of Veterinary Medicine & Biomedical Sciences. Watkins had worked with a biomedical engineer to develop a special intramedullary interlocking nail that can be inserted into the shaft of a horse’s broken humerus to stabilize it and help it heal. 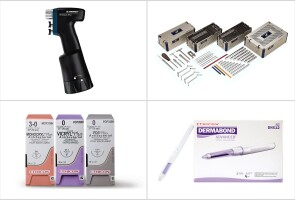 Watkins agreed to adapt the nail for Nora and perform the surgery, but with some trepidation—he had no experience with bears, and there was little reference material to consult. However, he says, "You have to be willing to go into the unknown and adapt. That's part of being a veterinarian."

Still, he needed a few special tools for a procedure on such a large animal. So he reached out to DePuy Synthes, one of the Johnson & Johnson Medical Devices Companies. “I’ve had substantial experience with their equipment and am comfortable using it,” Watkins explains. “Plus, I’ve developed a close relationship with the DePuy Synthes team, and I knew I could count on them for support.”

The team at DePuy Synthes was happy to help and donated a specialized surgical drill and a set of steel plates and screws, as well as sutures and a topical skin adhesive made by Ethicon, also part of Johnson & Johnson Medical Devices Companies.

This Bobcat Has Nine Lives: A Surgically-Repaired Big Cat Returns to the Wild in Oregon

On February 4, Watkins and nine other experts in orthopedic surgery from Texas A&M, the University of Utah Hospital and North Carolina State University performed the challenging, nearly six-hour procedure that was ultimately successful in stabilizing the bone.

The surgery also enabled Watkins to check on another health problem—Nora had been diagnosed with metabolic bone disease as a cub, which had caused some of her joints to develop abnormally. Zookeepers were worried that the disease had weakened her bones, contributing to her injury. But the news was good: Watkins says he was impressed with the overall hardness and density of Nora’s bones.

On the Mend—and on a Mission

For now, the goal is for Nora to rest and heal, says Kaleigh Jablonski, lead keeper of the Hogle Zoo's Rocky Shores exhibit, where its polar bears reside. Her activity will need to be restricted for at least a couple of months, but her care team expects a full recovery. Just a few days post-surgery, Nora was already up and moving about. 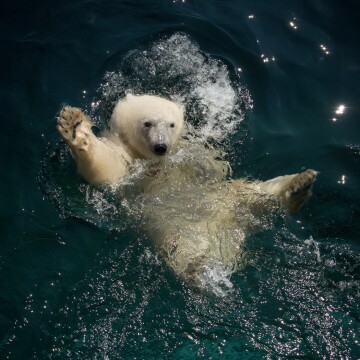 Nora's story is especially compelling because wild polar bear populations in the Arctic continue to decline. Due to warming sea temperatures, their habitat is shrinking at a staggering rate, which decreases the bears' ability to hunt and breed. If this trend continues, some experts predict that more than 60% of the population could disappear by 2050.

But many institutions, including the Hogle Zoo, are working to conserve the species, and bears like Nora are helping to raise awareness about how the public can do their part, too.

“When guests fall in love with Nora, they fall in love with polar bears. And if you love polar bears, you can't help but care about their wild home, which is being threatened by climate change," Jablonski says. "As an ambassador for her species, she has the capacity to teach people that they can save polar bears by making small adjustments that affect the environment, like carpooling to work and choosing energy-efficient appliances."

Want to see Nora in action? Check out this fun video taken earlier this year by the Hogle Zoo, which shows the impish bear playing in the snow, while her companion, Hope, watches from atop a rock. 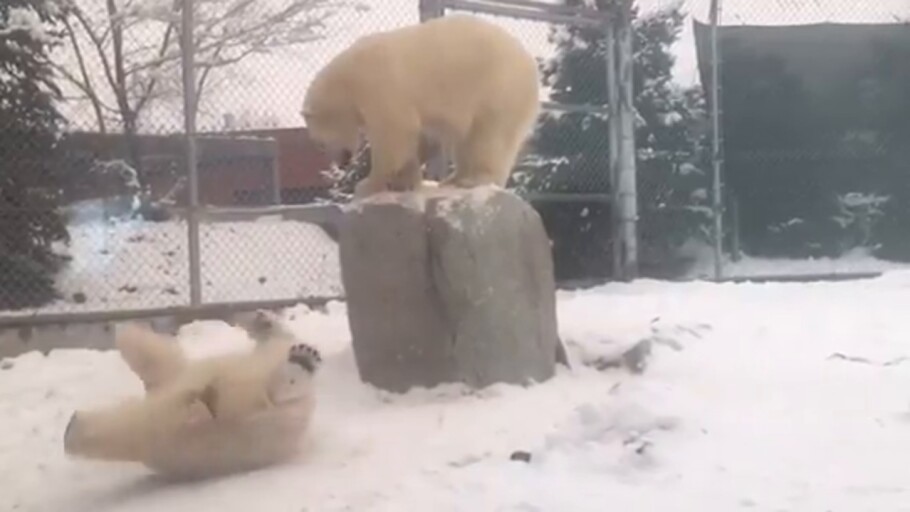 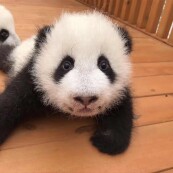